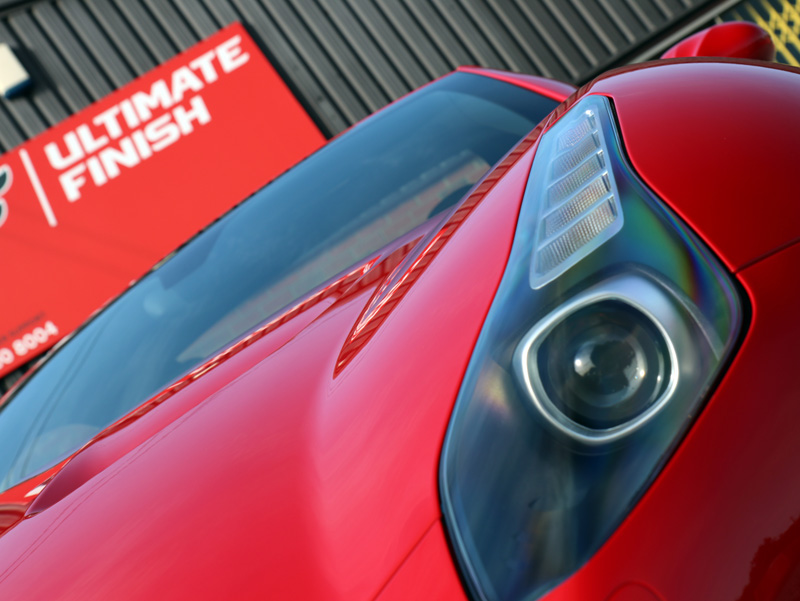 The California T is Ferrari’s drop top grand tourer, the ‘T’ designating the V8 engine is boosted by twin turbos delivering 552bhp and 557lb ft of torque. The combination is sufficient to rocket the California from 0 to 62mph in 3.6secs and produce a top speed of 196mph. The ‘Handling Speciale’ (HS) is an optional extra that, as the name suggests, is all about giving the driver more control when putting the engine through its paces. 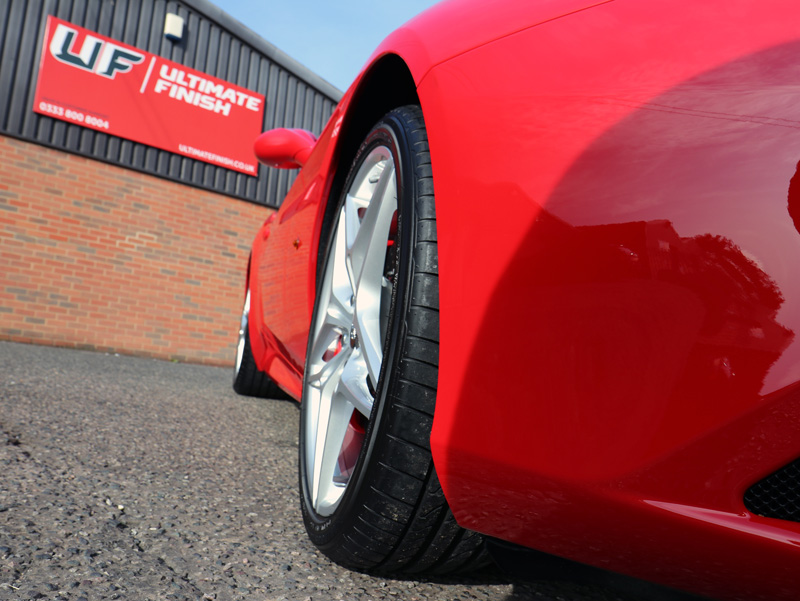 The ‘HS’ pack includes springs 16% stiffer than the standard at the front and 19% at the rear. The magneto-rheological active dampers have been re-tuned and the F1-Trac stability system reimagined. The gearbox software has been modified to improve upshift speeds by 30% and downshifts by 40%. And of course, as any sports car enthusiast knows, the experience is never as thrilling without a rich exhaust sound. So, Ferrari’s HS pack includes a 3-decibel increase producing a fuller note for that visceral edge. Cosmetically, Ferrari has also included a plaque inside and the grille and diffuser are painted a shade called Grigio Ferro Met, or grey, as we’d say!

After numerous hours of online research, the owner asked for the car to be delivered from Maranello in Egham directly to UF’s Brands Hatch detailing studio in Kent for a Gloss Enhancement Treatment and final protective sealant package using Gtechniq Crystal Serum. The California T arrived at the studio on a low loader. 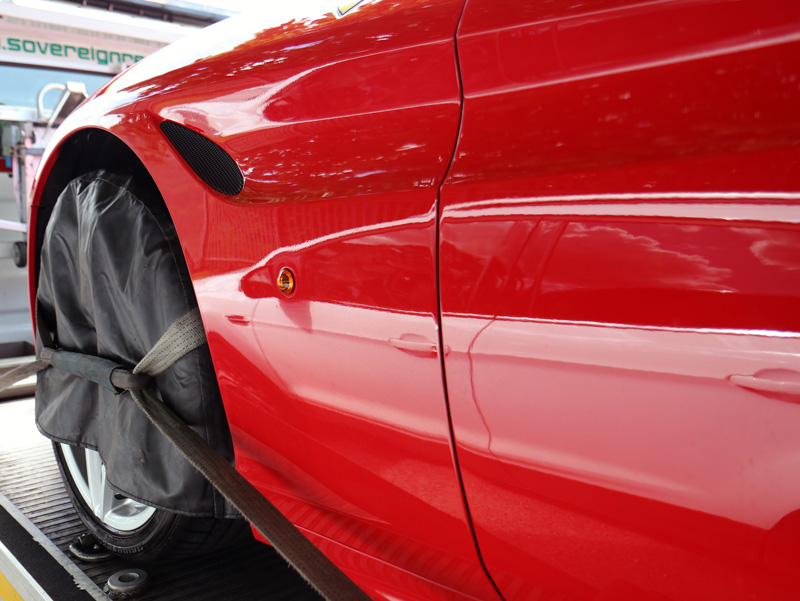 After carefully off-loading it, the wheel protectors and number plates were removed. 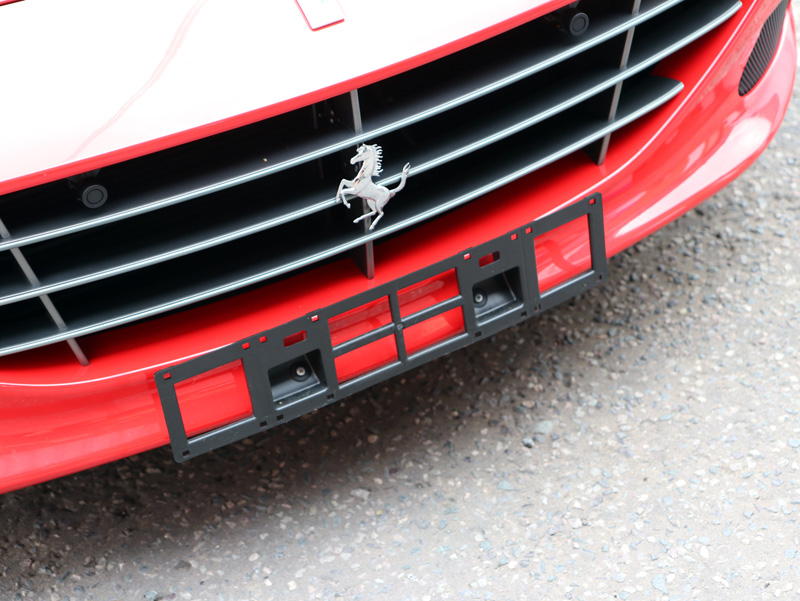 Then, the wheels and wheel arches were sprayed with an all-purpose degreasing solution to remove oily road grime and diesel splatters. 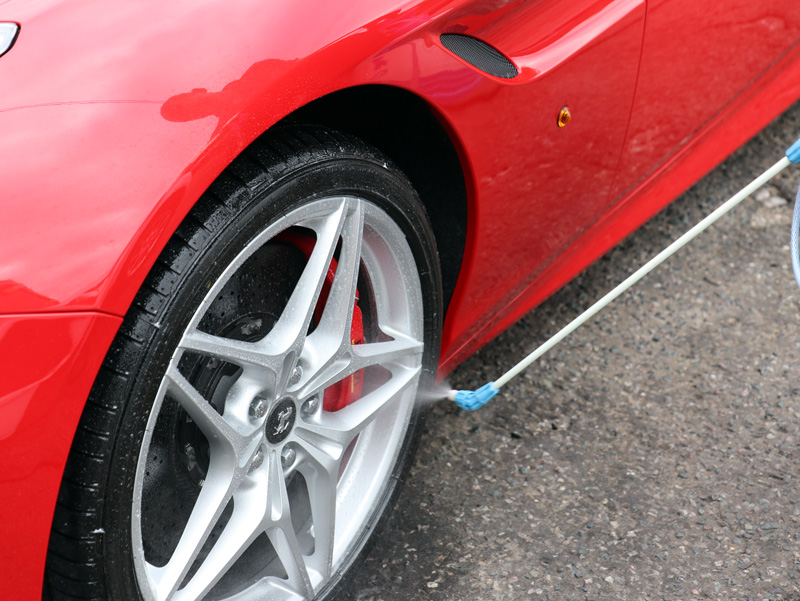 Wheel arches, in particular, are a natural trap for dirt and road grime, slung from the tyres. Using a pump up sprayer with a long, fibreglass wand, it’s possible to get the degreaser right up inside the wheel arches to make sure every part is covered with the solution. – Matt Back, UF Detailing Studio

The tyres were scrubbed to remove remnants of dressing and the wheels were treated for iron contamination. This type of contamination usually is derived from brake pads which shred when being used. Although the California T has carbon-ceramic brakes, this type of contamination can easily be picked up from surrounding cars, particularly on motorways. These tiny particles bond with any substrate they come into contact with and immediately begin to oxidise, causing them to swell. Using a dedicated iron contamination remover, sprayed onto the wheels, wheel arches and car bodywork, the particles are shrunk by the active ingredient, causing the particles to break their bond and allowing them to be easily rinsed away. 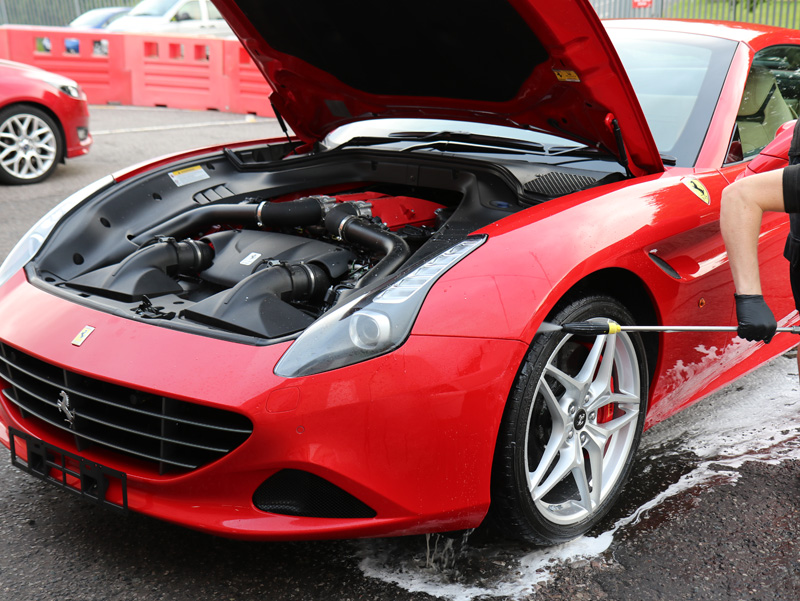 Tar is another commonly found contaminant most effectively removed using a specialist tar and adhesive remover, such as Gtechniq W7 Tar& Glue Remover. Sprayed on and allowed to dwell, the active ingredient dissolves the sticky bonds without damaging the underlying clear coat. The contamination can then be rinsed away using a pressure washer. 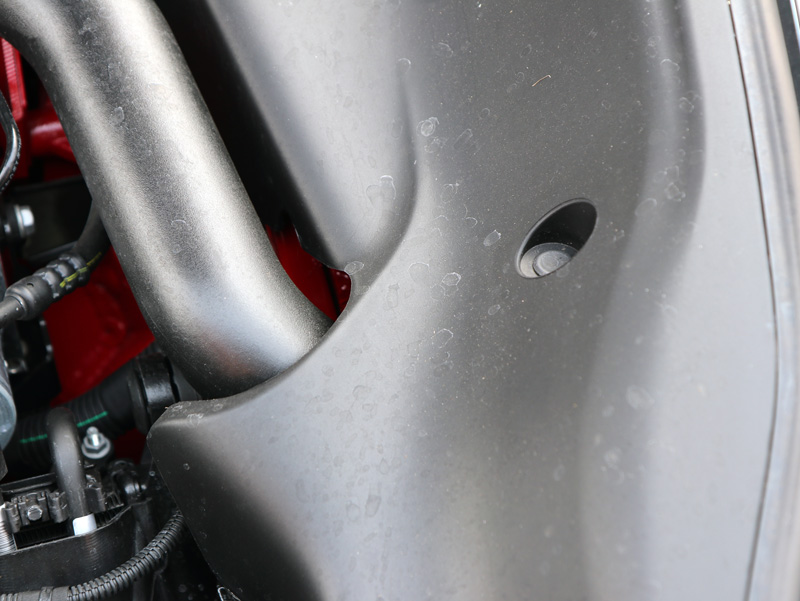 Under the engine, it’s so hot that water evaporates really quickly. When it evaporates, it leaves behind white deposits mainly consisting of calcium. Removing the water spot marks can be tricky when they’re baked on in a hot engine bay. After giving the engine bay a rinse with a degreasing solution, I dried the area with soft microfibre towels then used a Silica Scale Remover to dissolve the deposits so they could be removed without scrubbing, an action that might cause scuffs and scratches. – Matt Back, UF Detailing Studio

The specialist water spot remover used was Kamikaze Collection Silica Scale Remover, specifically designed to work on particularly hard, long-standing deposits. After treating the spots with the solution, the area was wiped with a microfibre to remove the residue.

Using a UF Wheel Bucket with Grit Guard and Wheel Woolies, the wheels were cleaned to remove any remaining dirt caught in the rim. The California T was pre-cleaned using Ultimate Snow Foam, a high sudsing solution applied through a foam lance attached to a Kranzle K-1152 pressure washer. The thick, creamy lather clings to surfaces, lifting larger particles of dirt and grit away from the surface. 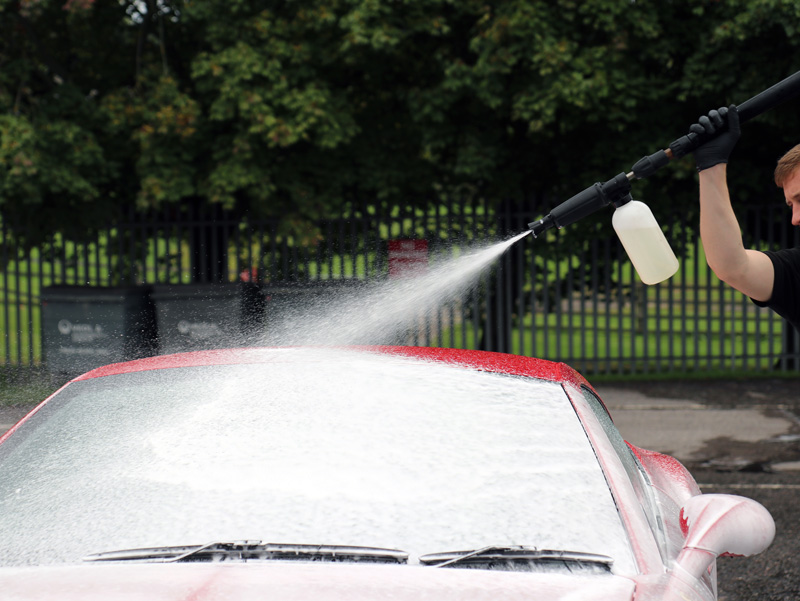 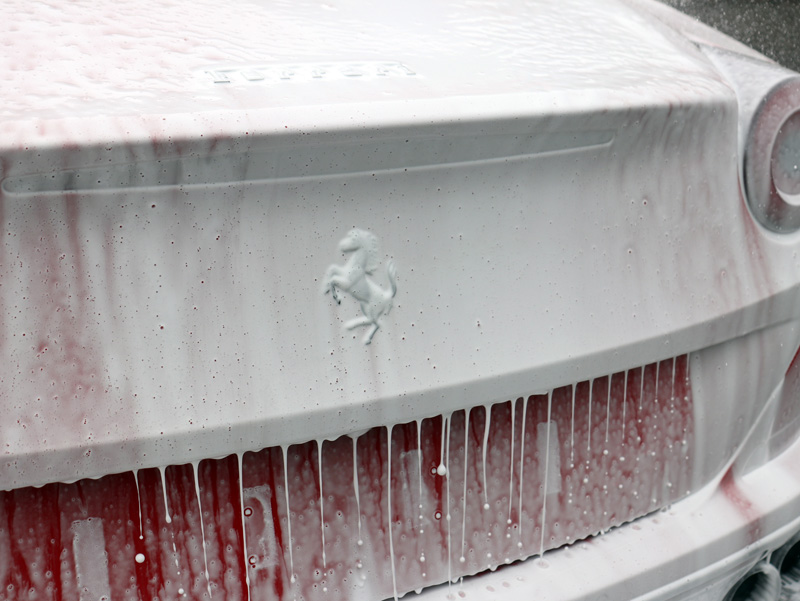 After rinsing the foam away, the California T was washed using the Two Bucket Method. This involves using a Wash Bucket with Grit Guard and a shampoo, and keeping a Rinse Bucket with Grit Guard containing only pure, clean water. The wash mitt is loaded with soapy water, a section of the vehicle washed, then the mitt is rinsed in the Rinse Bucket. The mitt is brushed across the Grit Guard, releasing particles of dirt into the bottom of the bucket. The mitt is wrung out, then dunked back into the soapy wash water. By keeping rinse water separate, dirt is prevented from being transferred back onto the car’s panels. This process helps prevent accidental scratching of the paint’s clear coat.

After the car had been thoroughly cleaned, the suds were rinsed away before an Aqua Gleam De-Ionising Water Filter was attached in-line with a hose to deliver a final, pure water rinse. This filter neutralises the impurities found in tap water that cause the unsightly, and potentially damaging, white spot marks such as those seen in the engine bay. The car was dried with soft microfibre towels and brought into the studio where the paintwork was closely inspected under high-intensity lighting. Areas of damage were noted on the Vehicle Appraisal Sheet for reference during machine polishing. Sanding marks were evident, with tell-tale, thicker, pig-tailing marks, as well as wash swirls and the occasional random deep scratch (RDS). 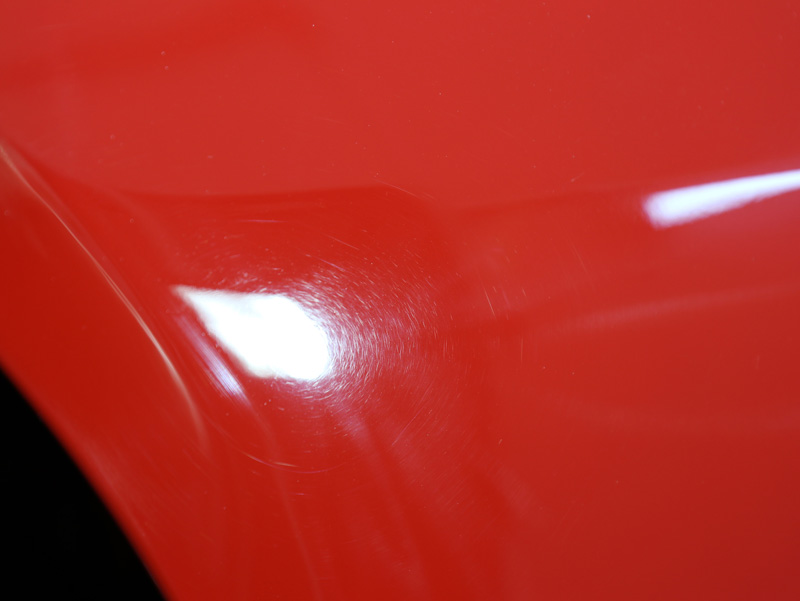 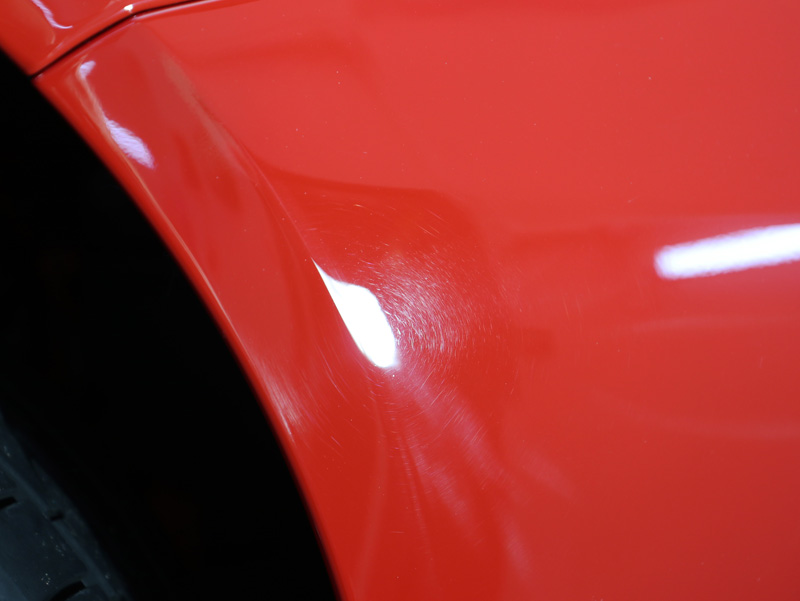 We use a paint depth gauge to take multiple readings on each panel over the whole car. This is essential prior to machine polishing as it tells you how much paint there is, so a better-informed decision can be made as to which polishing pad and compound combination will best suit the paintwork. Sometimes, the readings can reveal areas where the paint is thicker, indicating it may have been repainted, potentially after an accident or damage of some kind. The readings on the California T were mostly in the region of 120 microns, standard for factory finishing, whereas there was an area on the front bumper and bonnet where the paint was around 310 microns thick. It’s likely this area may have been repainted, possibly for stone chip damage. – Matt Back, UF Detailing Studio

To correct the paintwork, over the larger, flatter panels, a RUPES BigFoot LHR 12E Duetto dual action (DA) machine polisher was used. For smaller areas, such as along the boot edges and door surrounds, a BigFoot LHR 75E Mini DA polisher was used. On both machines, a RUPES Green Foam Polishing Pad was used with Menzerna Medium Cut Polish 2400. This polish has been specifically designed for drier paints and worked well on the original (OEM) paint as it contains lubricating oils that allow the diminishing abrasives to be worked for longer, breaking them down completely to leave a smooth, reflective finish. 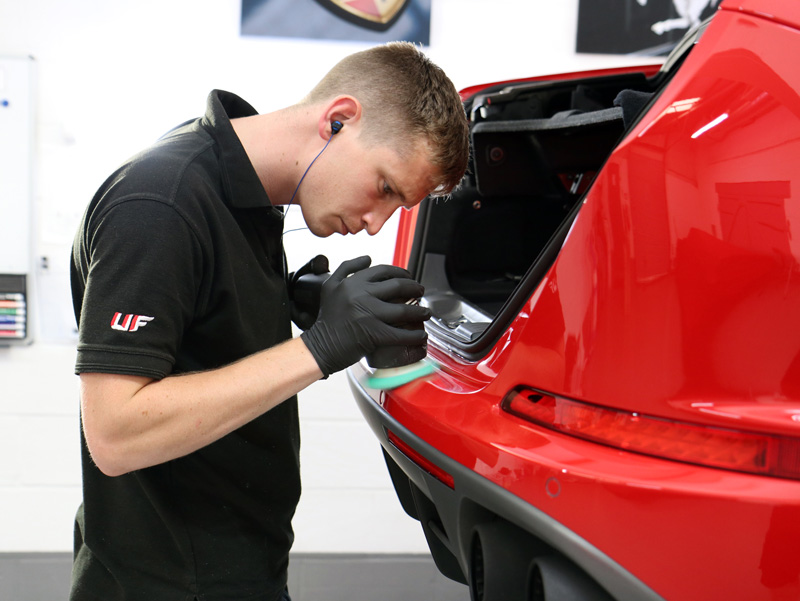 With the two different paint types; original and new, the process took longer than usual as the combination that achieved great results on the original paint didn’t have the same effect on the newer paint which was actually quite a bit softer. For the newly painted areas, I used Menzerna Medium Cut Polish 2500, specifically formulated for softer paint finishes, along with a slightly less dense RUPES Yellow Foam Polishing Pad, to reduce the cutting power and to prevent holograms from forming. – Matt Back, UF Detailing Studio

During the inspection, three marks in the paintwork had been spotted inside the vents by the rear bumper. Being a tight space, a RUPES BigFoot Nano iBrid was used. This polishing tool can be used in rotary mode or dual action mode, depending on the cutting action required. In DA mode, either a 3mm throw or a 12mm throw can be selected, the better to concentrate the polishing action in the area required. To tackle these reasonably deep marks in such a tight spot, the 3mm DA mode was selected, along with a RUPES Green 1.5-Inch Polishing Foam Pad and Menzerna Heavy Cut 400.

With the damage corrected, the paintwork was then refined using a FLEX PE14-2-150 rotary machine polisher, a 3M PERFECT-IT III Black Finishing Pad and Menzerna Super Finish Plus 3800. The fast, direct action of the polisher, soft foam pad and fine jeweling polish brought the red paintwork up to a brilliantly high shine, ready for a protective coating. 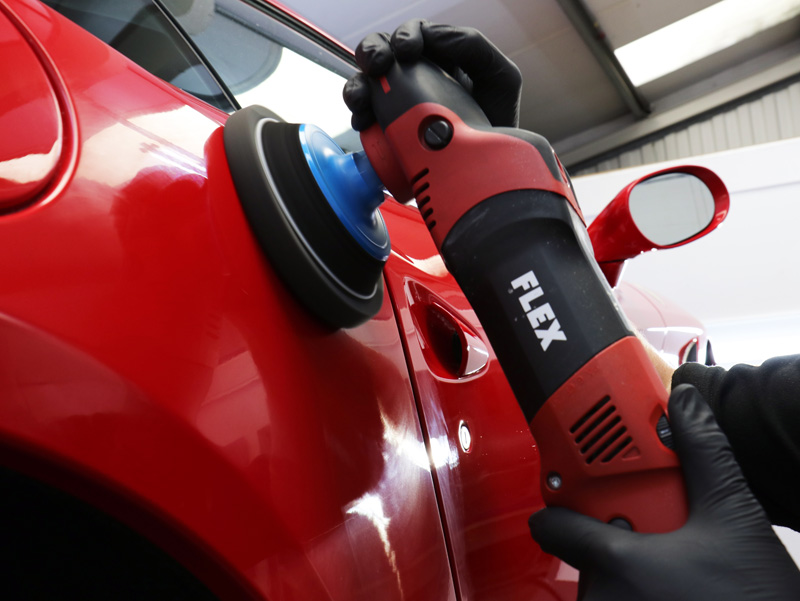 The owner had selected Gtechniq’s Crystal Serum as a final protective sealant. This is a highly innovative nanotechnology-based ceramic coating with excellent hydrophobic and swirl resistant properties. In addition, Crystal Serum is virtually impervious to extremes of pH, so chemical and industrial fallout are repelled from the treated surface.

Crystal Serum is applied as a single stage coating but during the curing process, it hardens into two layers, each with their own distinct features. The lower layer cures to a hardness of around 7H (on the pencil scale), lending flexibility to the end result. The upper layer cures to around 9H, making it very tough. Between the hard outer layer and the softer, more flexible under layer, the coating is better able to withstand damage such as swirl marks. For cars with softer paintwork, this is a bonus as they are easy to mark during the usual wash process. – Matt Back, UF Detailing Studio 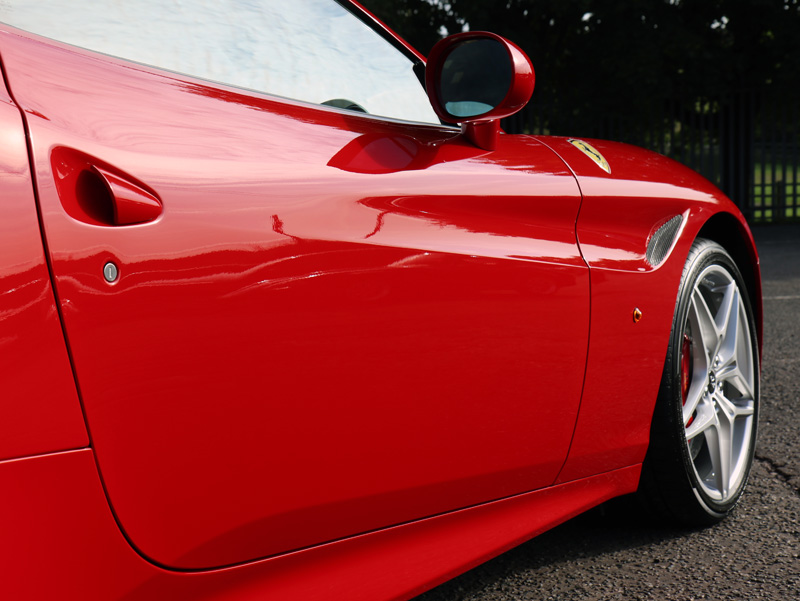 Crystal Serum is Gtechniq’s flagship coating, as a result of the durability and performance it delivers and as such, Crystal Serum carries a guarantee of seven years. However, to ensure durability and performance, the coating must be applied under controlled environmental conditions, with humidity and temperature kept within set parameters. Additionally, whilst the coating is curing, the car must be stored away from the elements. For these reasons, Crystal Serum is available only as a service through Gtechniq-approved detailing studios.

The wheel protectors had left some smudging on the alloy and this was removed with a light polish by hand using Menzerna 3800. As a final touch, the tyres were dressed with Gtechniq’s nano-based T1 Tyre ‘n’ Trim dressing to provide a satin shine. 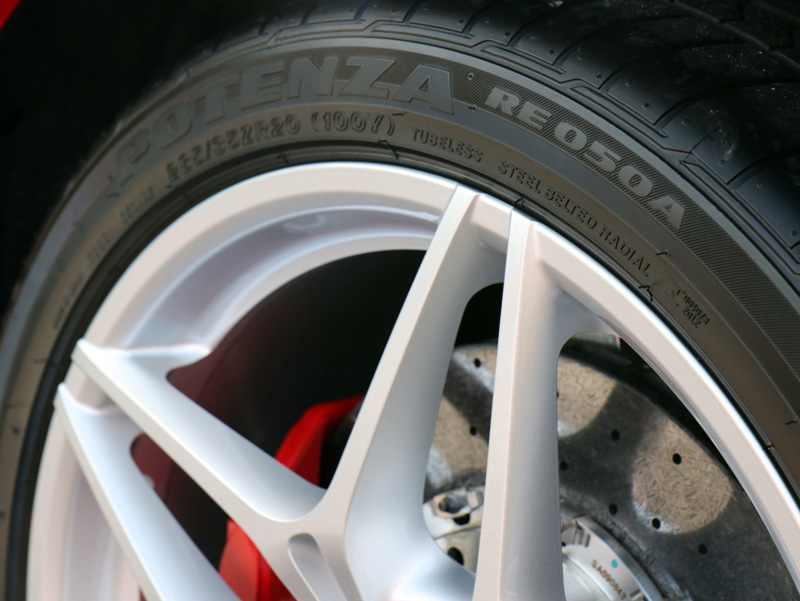 With the paintwork restored to a level befitting of a thoroughbred and now fully protected, the California T looked fabulous in the Kentish sunshine as it awaited collection by its expectant owner. 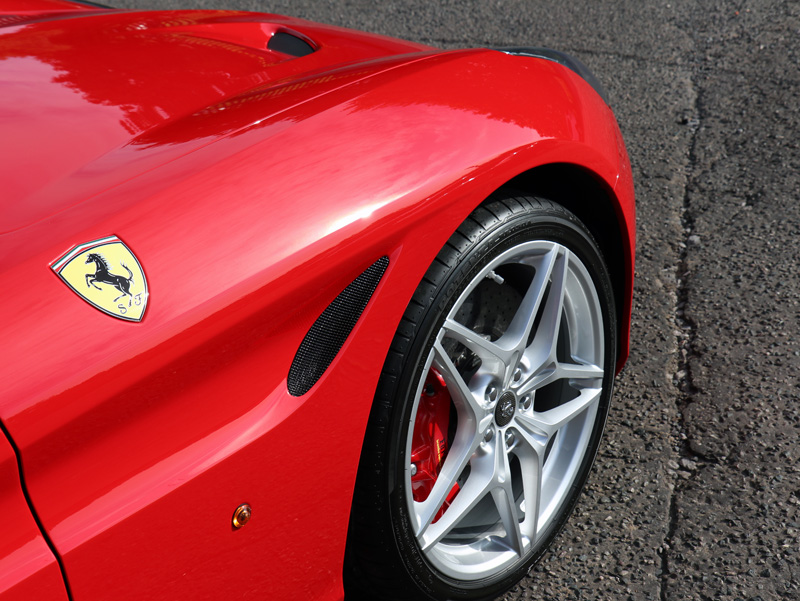 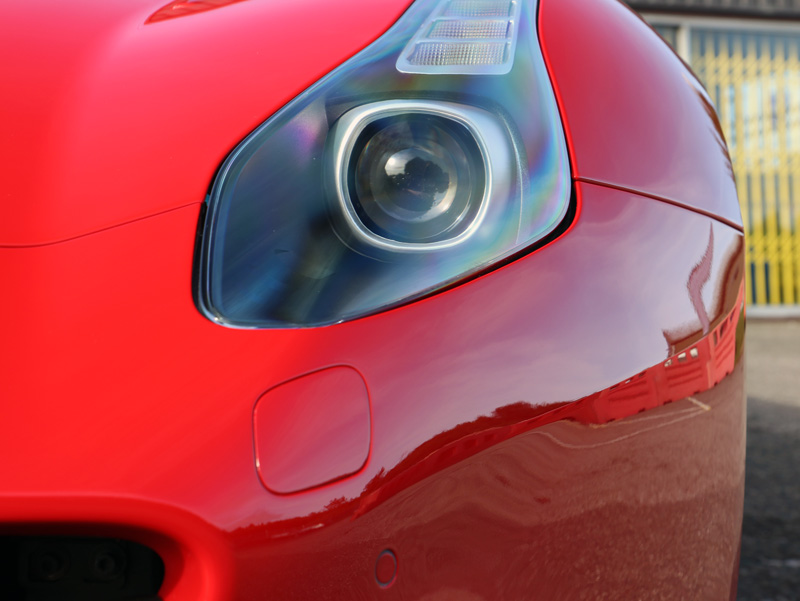 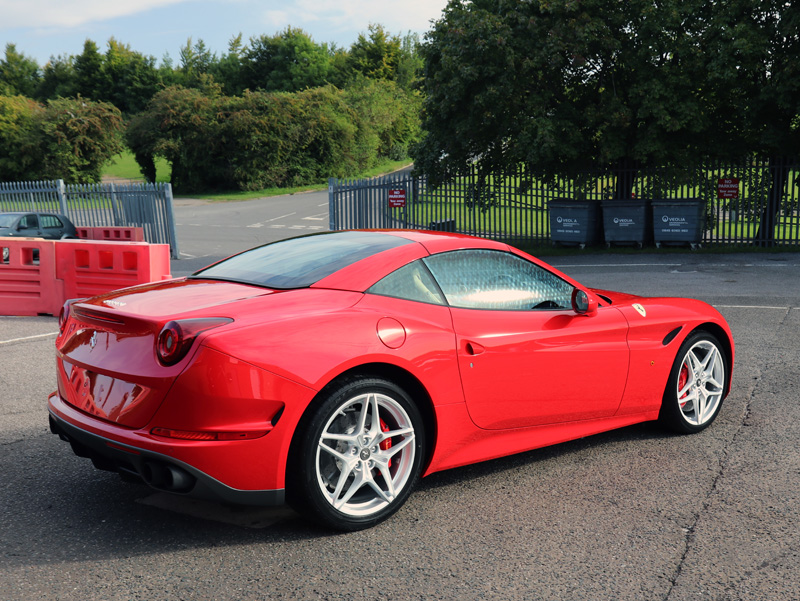