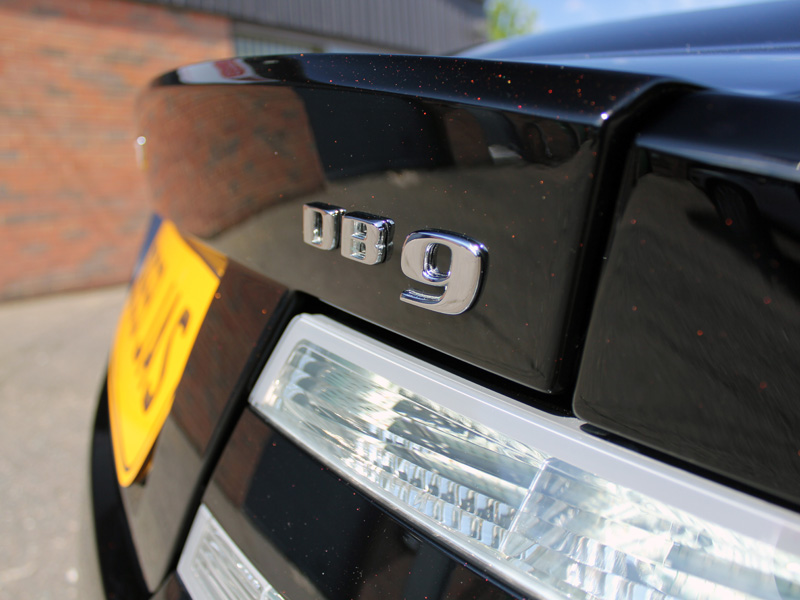 The Aston Martin DB9 is described as a timeless classic, so it begs the question as to why Aston Martin needed to make any changes to it at all. It seems they were convinced they could add something extra to its magic though and so, the new DB9 was born. The video below sets the scene …

Nearly half the parts are brand new and around two-thirds of the body panels have never been seen before. So it truly is a ‘new’ DB9. The engine is set lower, giving the new DB9 even better balance. The bonnet structure and boot lip have been redesigned to give it even better aerodynamics and the low, aggressive featuring gives it a refined and poised athleticism.

Sad then, to see such a beauty not looking at its best! Our customer brought his DB9 V12 in to the Ultimate Detailing Studio and the swirl marks in the special order Storm Black Metallic paint were immediately obvious.

It was such an unusual colour, I’ve not seen anything like it before. In certain lights it looked a regular metallic black, but then when the sun hit it all these bronze sparkles came out. The fleck makes the car look as though it’s covered in stardust! But the damage to the paint was significant, it’s been years since I’ve seen anything like it. – Derek Ginger, Master Detailer, UDS

Initially the DB9 was treated with Korrosol to remove the iron contamination. The colour-change function shows the product is working.

Iron contamination is quite common particularly when cars have been driven around for a while. When pressure is applied to brake pads they tend to shred fine particles which are hot. These particles then bond to wheels and also to paintwork – cars collect other cars brake pad filings too whilst driving along. The trick to getting rid of them is to use a product which shrinks the particle forcing it to break its bond with the substrate – that way no harm comes to the vehicle panels and the contamination can simply be rinsed away. – Derek Ginger, Master Detailer, UDS 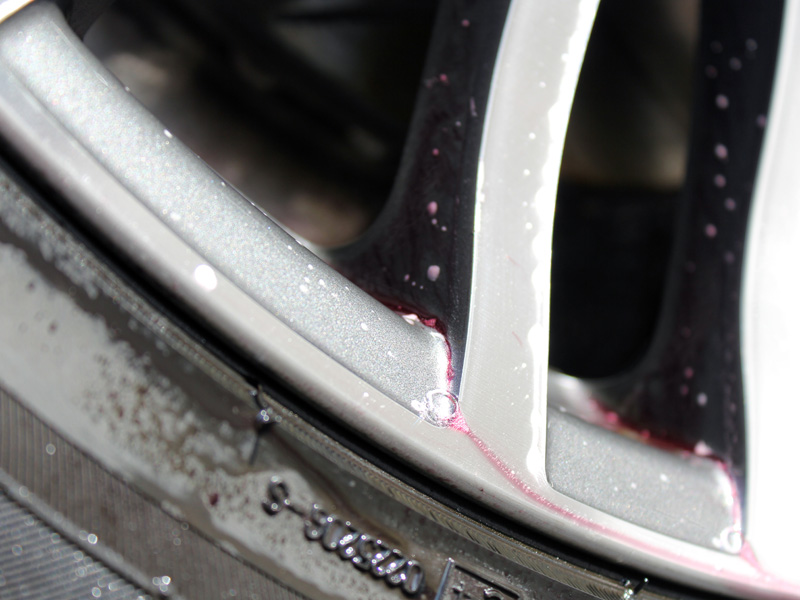 Next the car was treated with Bilt-Hamber Surfex-HD, a water-based degreaser that removes build up of road grime and oil residues. 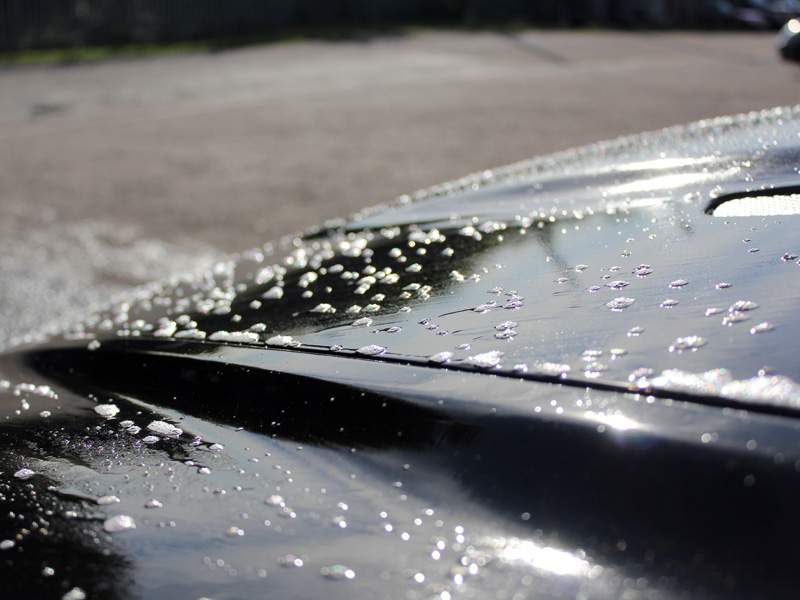 Then the car was covered with Ultimate Snow Foam to remove any larger particles of dirt and grit that remained. After a few minutes the solution was rinsed off the bodywork taking the contamination with it. 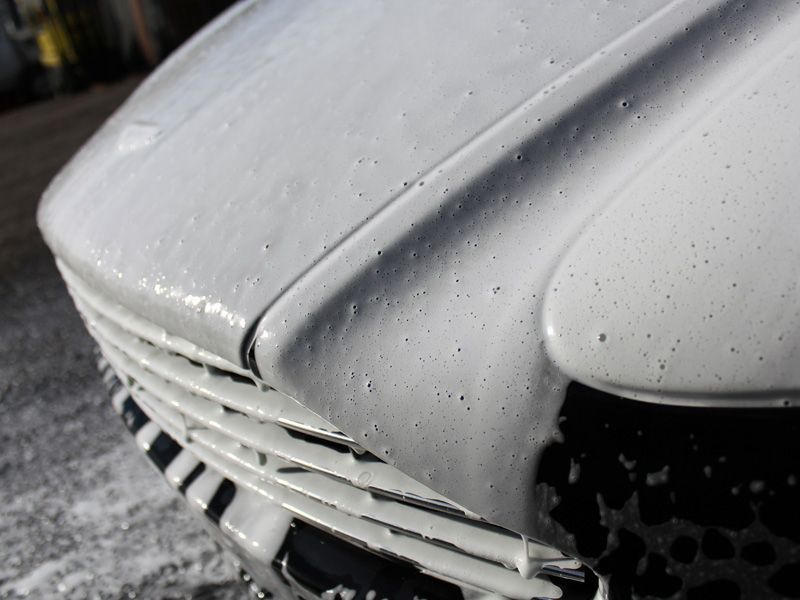 The DB9 was washed carefully, using the Two Bucket Method, a Microfibre Madness Incredimitt and Bilt-Hamber Auto-Wash shampoo. After the suds were rinsed away an Aqua Gleam deionising water filter was connected to the hose for the final, pure water rinse. Then the DB9 was patted dry using soft clean microfibre drying towels.

Now thoroughly clean, the extent of the swirls could be seen clearly under high intensity lighting. 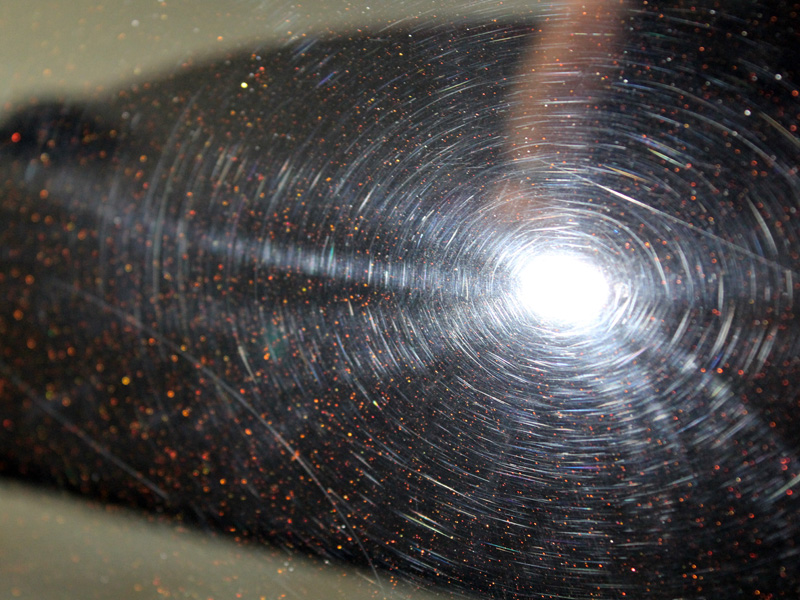 Some panels were marked more badly than others. The boot was particularly bad so I selected the SCHOLL Concepts Orange Sandwich Waffle Pad and S2 Orange High Performance Compound. The rest of the bodywork came up well using POLISHANGEL Master Compound and the SCHOLL Concepts Purple Polishing Pad. – Derek Ginger, Master Detailer, UDS 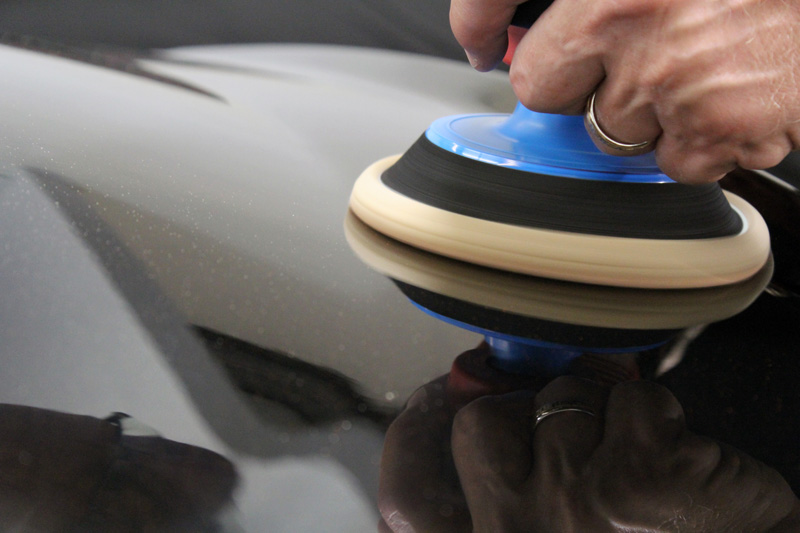 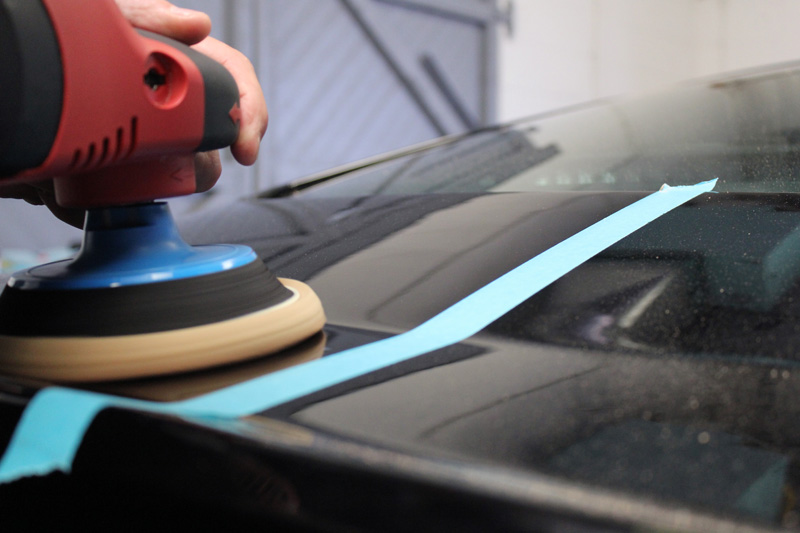 The paintwork was now ready to receive a couple of layers of POLISHANGEL Viking Shield. 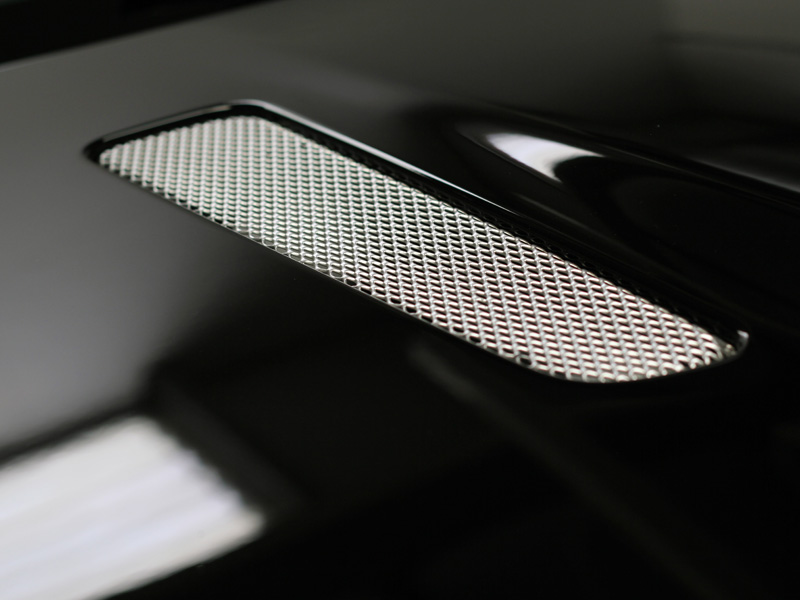 The wheels and exhaust tips were protected using POLISHANGEL SUPERSPORT PTFE Wheel Wax, whilst the tyres were dressed with Swissvax Pneu to leave a natural satin sheen. The glass was polished with POLISHANGEL Cristal before the exterior glass was protected with Rain | 9H, a hydrophobic barrier that causes rain to bead and blow away, making driving easier during rainy weather. 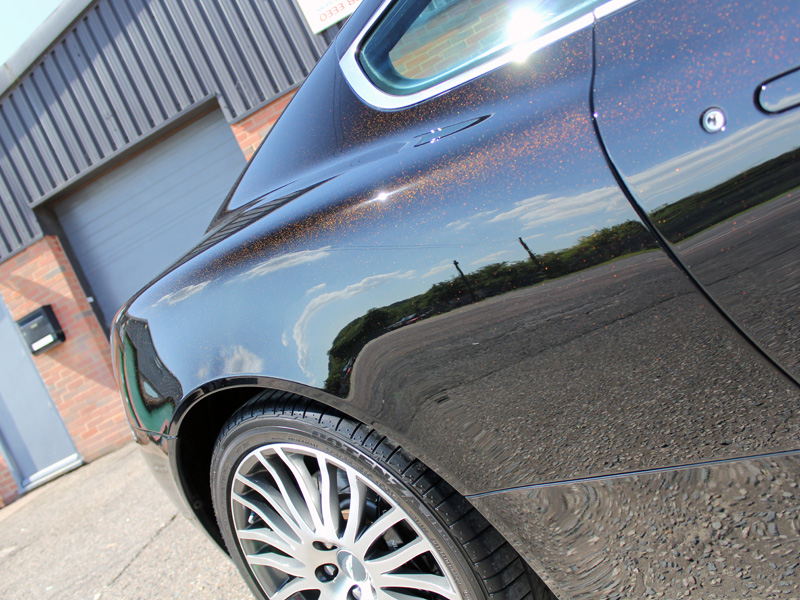 The finished DB9 sparkled when the treatment was finished, Viking Shield bringing the bronze flake out in the paintwork beautifully. 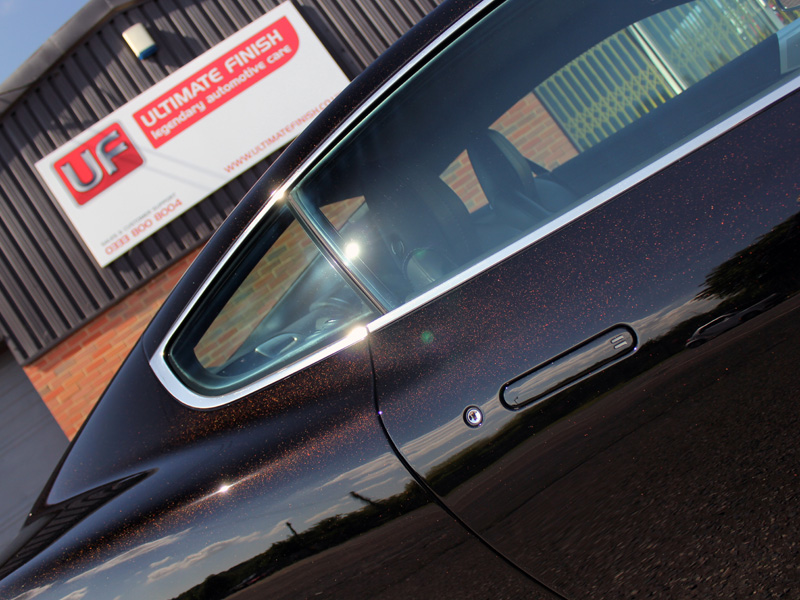 The depth of shine was truly stunning. The customer was delighted with the results and couldn’t remember a time it had looked better! 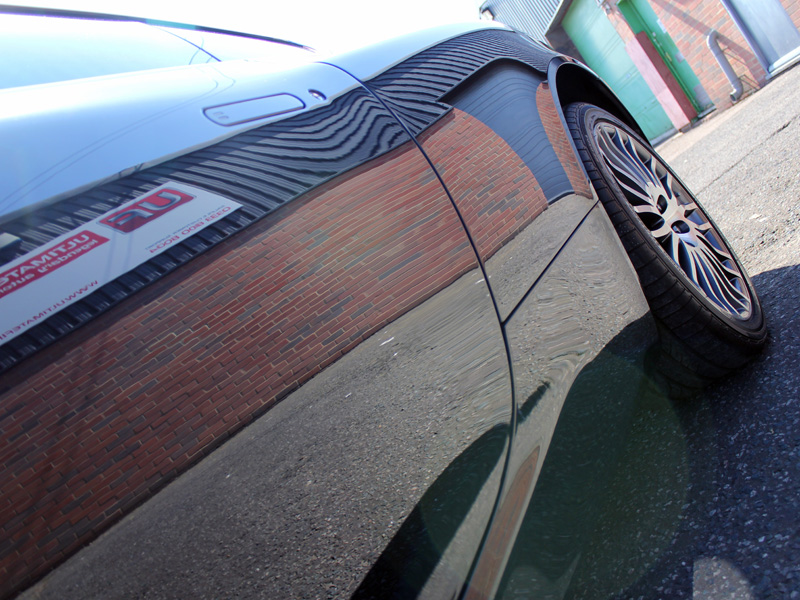 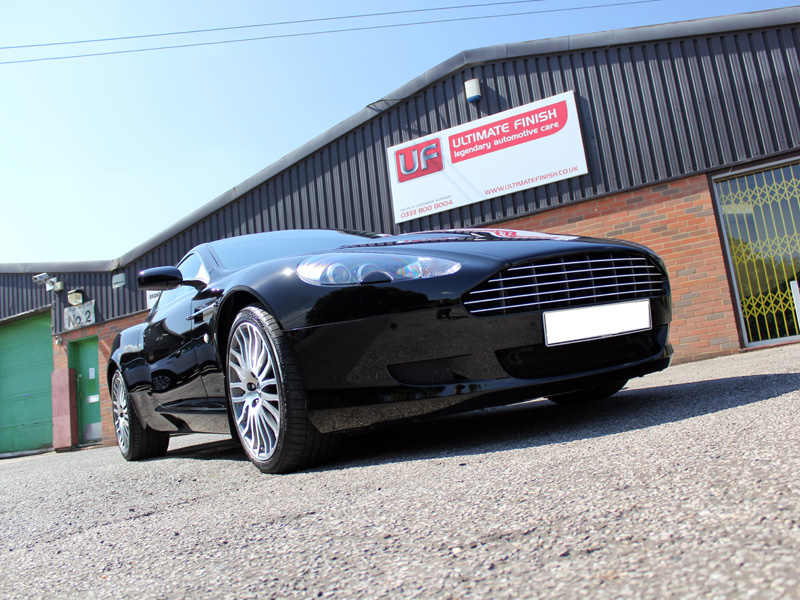