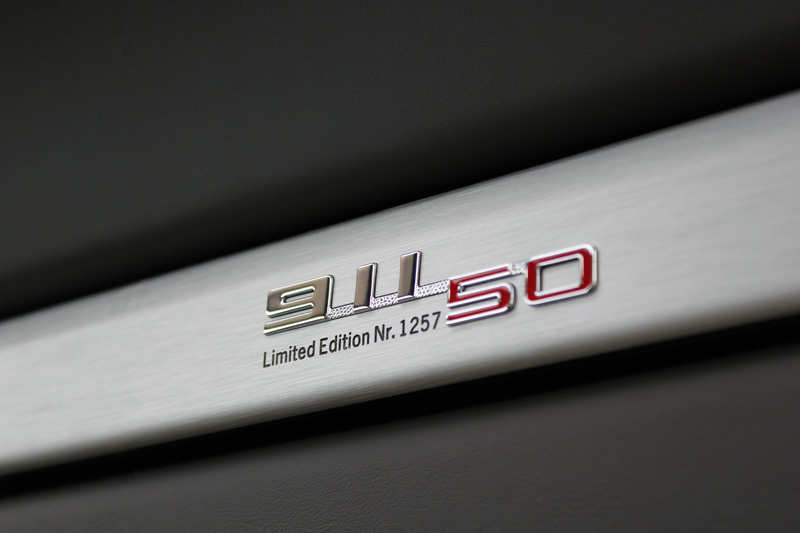 Since 1963 the 911 has developed its name as the ultimate drivers experience. To commemorate 50 years since the 911 first came into being Porsche launched the 50th Anniversary Limited Edition. Based on the Carrera S, this special birthday concept features a few tweaks to the traditional 911 styling and has a few optional extras for those wishing to customise their ride. A true limited edition, only 1963 will ever be produced. This particular 911 deserved protection.

And it’s still a dream for drivers! The seventh generation 911 has only gone from strength to strength. The Anniversary Edition uses the wider body style of the Carrera 4, giving it an additional 44mm track for better stability through corners. It also features Porsche Torque Vectoring with a limited-slip differential as standard. Porsche Active Suspension Management ensures responsive handling even on uneven surfaces and the 3.8-litre flat-six develops 394bhp at 7400rpm. Let the 50th Anniversary 911 loose and even the car sounds as though it’s celebrating!

As a nod to tradition, this 911 features Fuchs-inspired 20-inch alloy wheels, darkened headlights surrounds and chrome highlights across the engine cover. Geyser Grey is specific to the 50th Anniversary Edition, although a darker shade of grey and the standard Carrera S Basalt Black are available as alternative options. For the interior, choose from cloth houndstooth seat inserts or full leather and each model comes with a dash-mounted commemorative plaque.

Hardly surprisingly then, that on purchasing his 50th Anniversary 911 this customer was determined to protect his investment, so booked it in to the Ultimate Detailing Studio for a New Car Protection Treatment.

To being with the number plate was removed to allow for easier access during the cleaning and protection process. 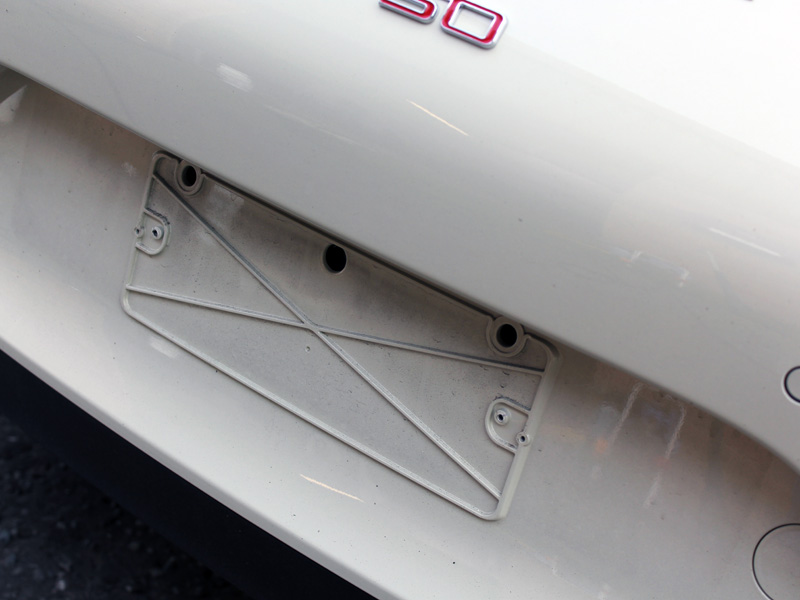 The car had been driven briefly and so had collected some dirt in the usual places. 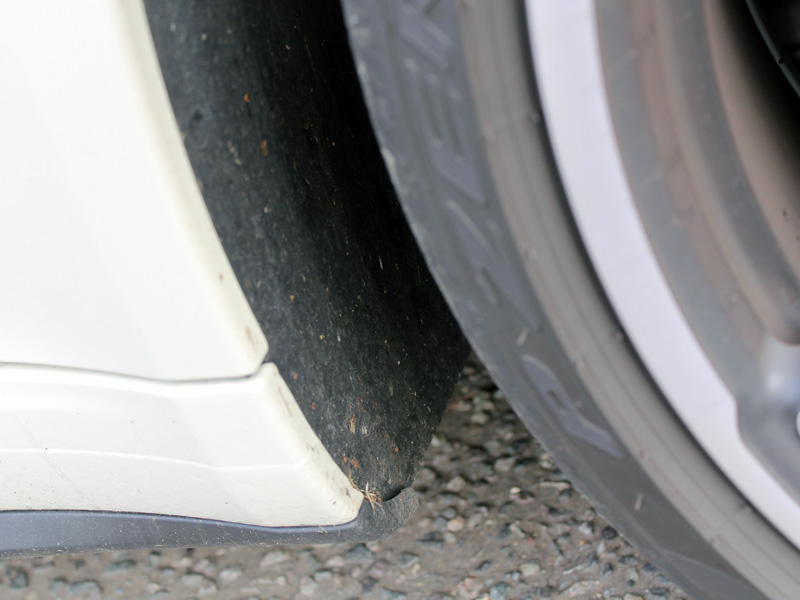 The 911 was treated with Bilt-Hamber Korrosol to remove any bonded iron contamination, usually derived from brake pads which shred as they get hot. The colour-change function highlights the iron particles and shows the product is working. 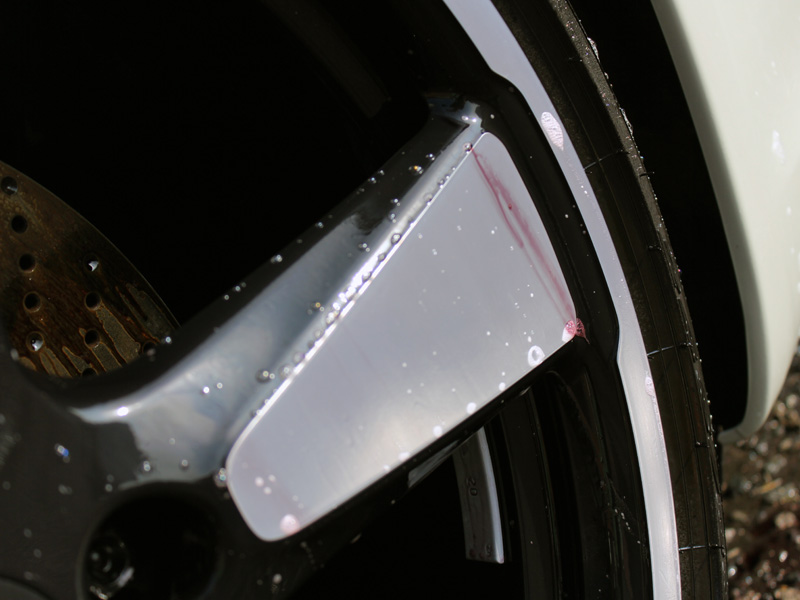 The next stage was to degrease the bodywork and wheels to ensure any road grime was thoroughly removed. 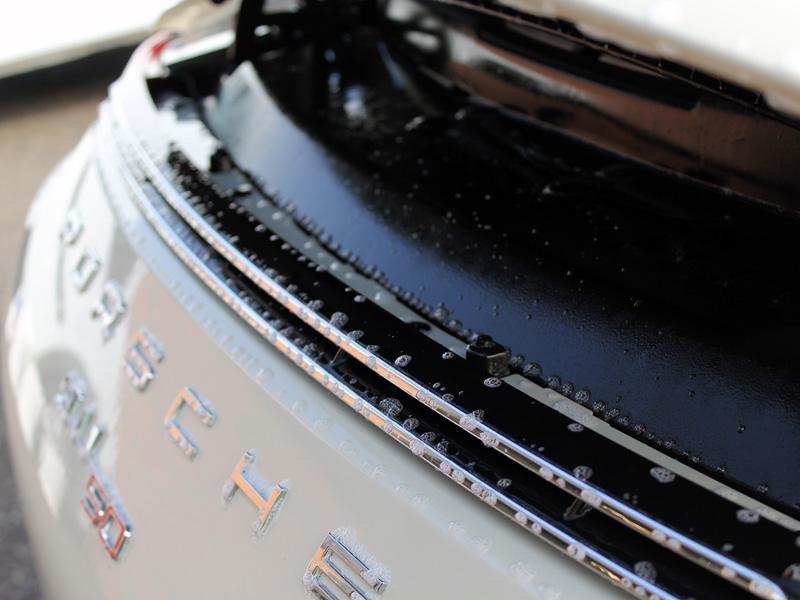 As the final part of the non-contact, pre-cleaning process, the 911 was covered with Ultimate Snow Foam, a high foaming product that lifts particles of dirt away from the surface of the bodywork, allowing them to be freely rinsed away, minimising the chance of introducing scratches during the wash process. 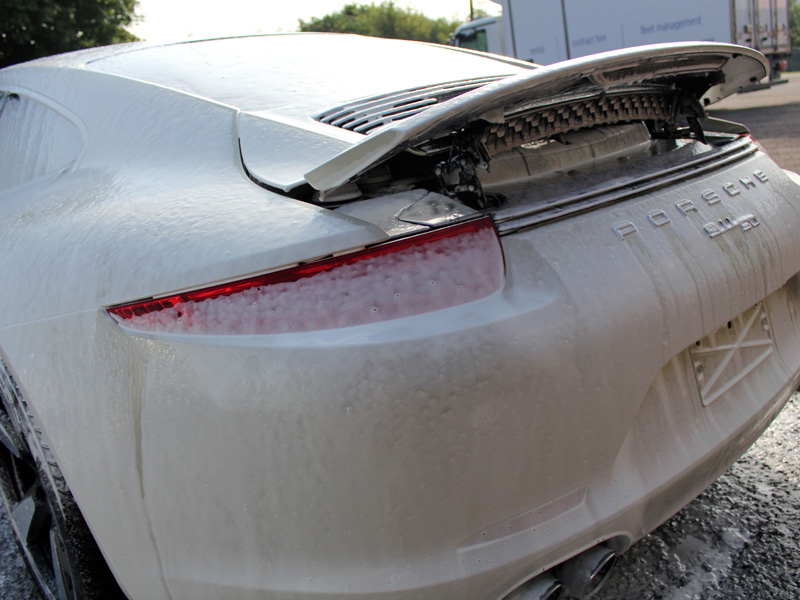 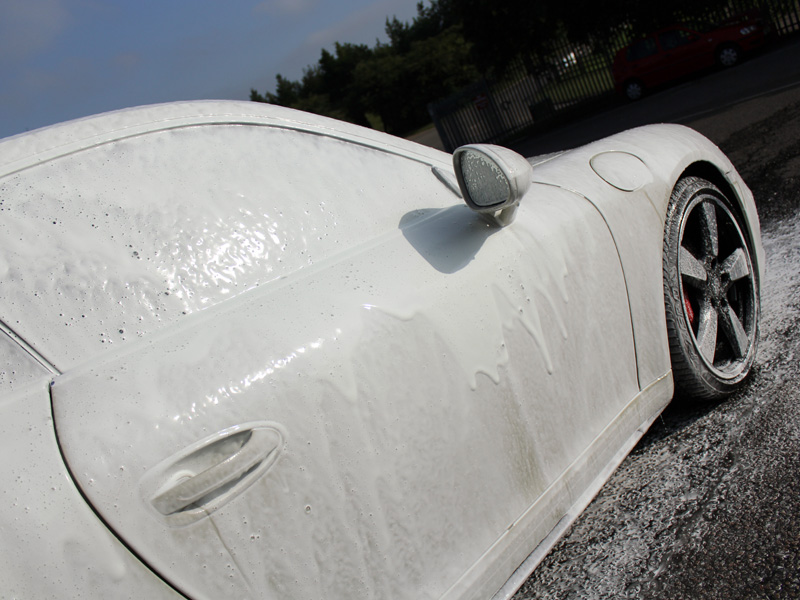 The Porsche was washed using the Two Bucket Method and Nanolex Reactivating Shampoo, then rinsed clean. Once free of suds an Aqua Gleam deionising water filter was attached to the hose for the final, pure water rinse. The car was then dried before being given a light polish using the Rupes BigFoot LHR 15ES with a RUPES White Ultra Soft Finishing Pad and Swissvax ‘Professional’ Final Finish.

Because the car was new there weren’t any serious blemishes in the paintwork. However because of the lighter colour I wanted to be sure the final result would be as shiny as possible so I used the RUPES BigFoot LHR 15ES to give the paintwork a boost. – Derek Ginger, Master Detailer, UDS

The car bodywork and wheels were then wiped thoroughly using Nanolex PREMIUM Paint Cleaner to ensure all traces of silicones and polish reside were removed, preparing it for sealing with Nanolex PROFESSIONAL Paint & Alloy Sealant.

The bodywork has to be free of any residues to ensure the maximum number of bonds possible form between the sealant and the substrate. This gives the sealant more staying power, giving added protection for longer. – Derek Ginger, Master Detailer, UDS 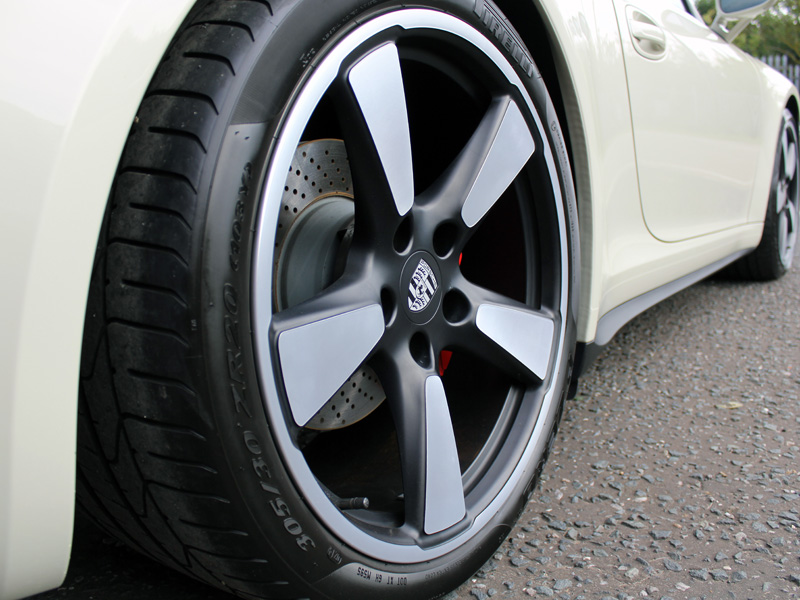 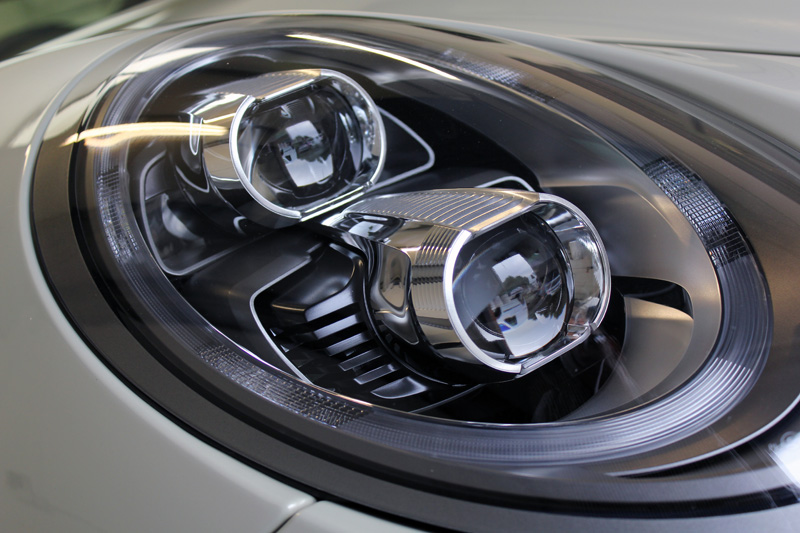 The final result was stunning, truly doing justice to the Anniversary Edition. 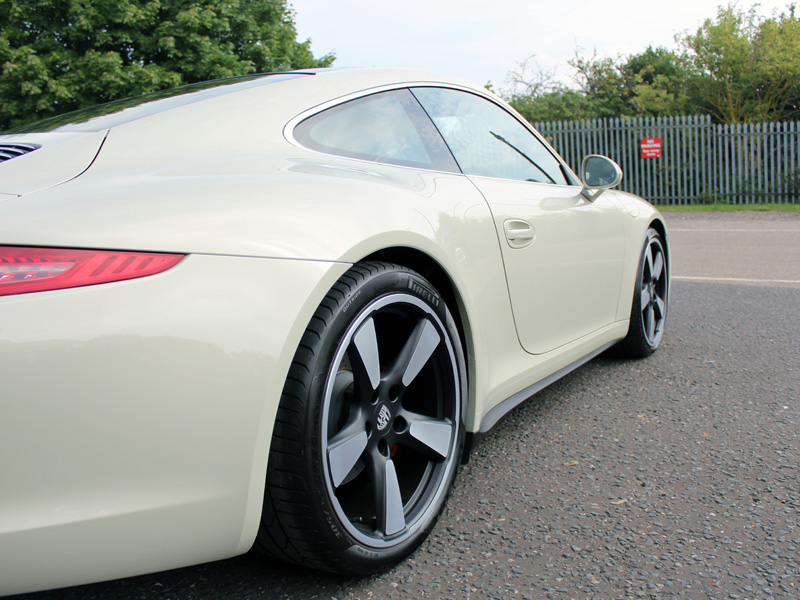 The customer was so pleased he thought the other 1962 Anniversary Editions should also pay the Ultimate Detailing Studio a visit! 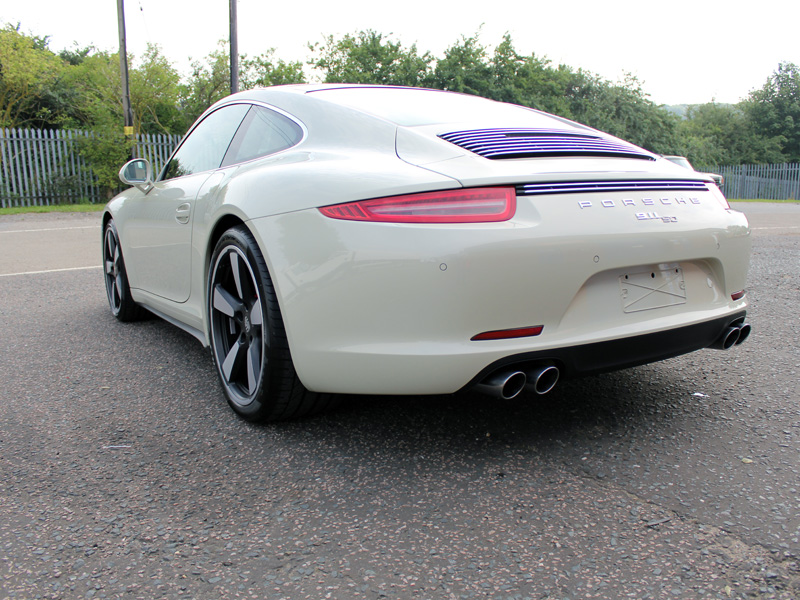 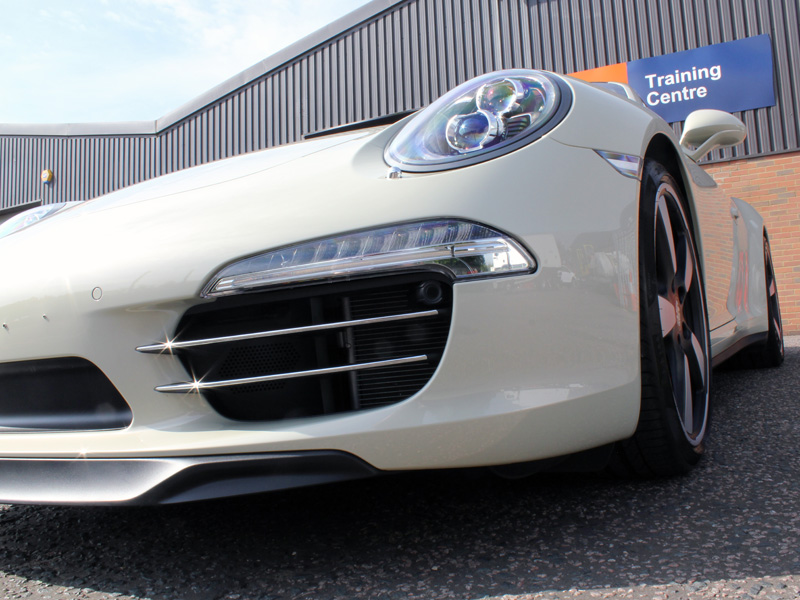