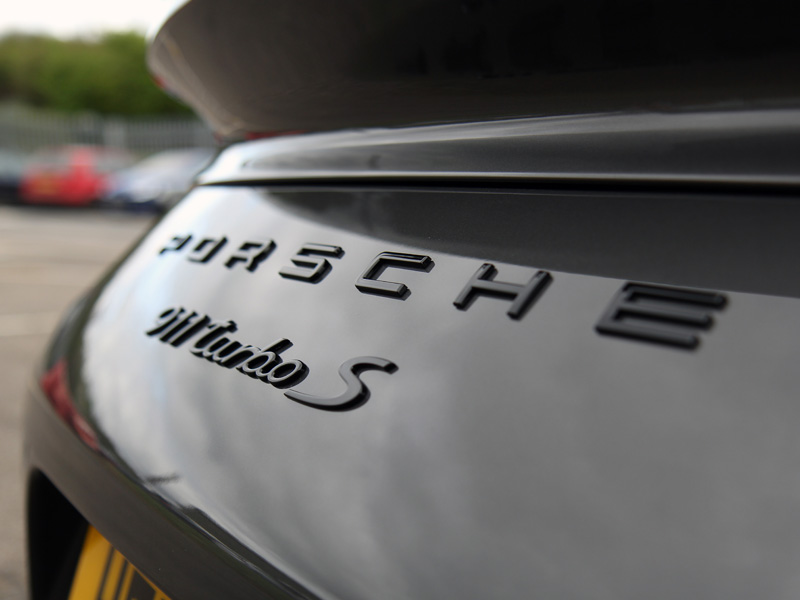 Initially unveiled at the Frankfurt Motor Show in 2011 to replace the 997, the Porsche 991 burst onto the scene with an entirely new platform. Featuring longer body panelling and wheelbase, the overall length of the latest incarnation of the 911 increased by 70mm. A new transaxle configuration allowed the rear wheels to be placed 75mm further towards the rear, the better to distribute weight and therefore significantly improving the handling, particularly on those tight and twisty roads. The ‘Turbo’ and ‘Turbo S’ variants were introduced eighteen months later, in May 2013.

The second generation ‘Turbo S’ received a facelift in 2015 which, although subtle, worked to modernise and refresh the look of the newest 911. Vertical venting on the deck lid, thin LED strips mounted in the front bumper and the new shaping for the rear tail lights (so-called, 3D tail lights) are the most visible of the tweaks. 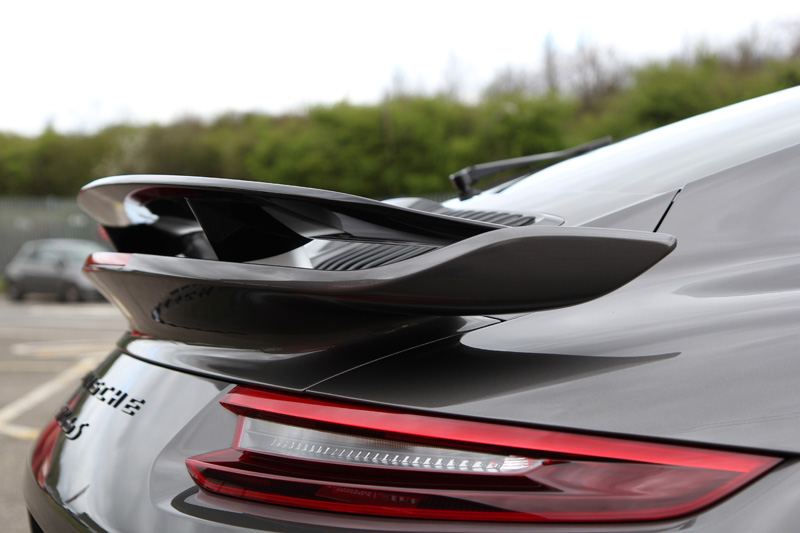 There have been a number of revisions underneath too. Powered by the 3.8-litre twin-turbocharged flat six engine, Porsche has squeezed out an extra 20hp by changing injection nozzles and increasing fuel pressure. This puts peak power now at 572bhp, and with a new ‘dynamic boost’ capability, the 991 Turbo S is guaranteed to get pulses racing, delivering 0-62mph in 2.9 seconds. Evo called the facelift 991 Turbo S ‘the Ultimate Everyday Supercar?’, whilst RoadandTrack.com proclaimed “There’s Almost Nothing The 2017 Porsche 991 Turbo S Can’t Do”.

The owner of this 991 Turbo S had previously owned three Porsches, the last one being a Cayman GT4 which he brought to UF last year for a New Car Protection Treatment. When the opportunity presented itself to purchase a brand new Turbo S whilst sidestepping the all too familiar waiting list, he jumped at it! Having been impressed with the results of the work carried out on the GT4, his first point of call was to book the 991 into UF’s Brands Hatch Detailing Studio.

Collecting a new car is always exciting, and it can require a significant amount of self-discipline not to hold on to the car for a few weeks to ‘play’ with it before getting it protected. However, it’s surprising how quickly damage accumulates on paintwork, so it’s best to book it in straight away. Even washing the vehicle can cause swirl marks which require removal prior to sealing the paintwork and could possibly result in having to part with your new toy for longer than you would have had to otherwise. Luckily as an existing customer the owner appreciated this point. Unfortunately, whilst driving from the dealership to the studio, an altercation with the kerb had resulted in both off side wheels being slightly damaged.  – Matt Back, UF Detailing Studio

Typically, iron contamination comes from brake pads which shred when the brakes are applied and, although the Turbo S has carbon ceramic brakes, new cars are often transported via rail where metallic particles can be picked up. These particles can be highly corrosive if left in situ, so it’s essential to remove them prior to applying any protective coating. – Matt Back, UF Detailing Studio

The Turbo S was then degreased using a solution of Gtechniq W5 Citrus All Purpose Cleaner to remove any transportation wax which could interfere with the bonding process of the final sealant. 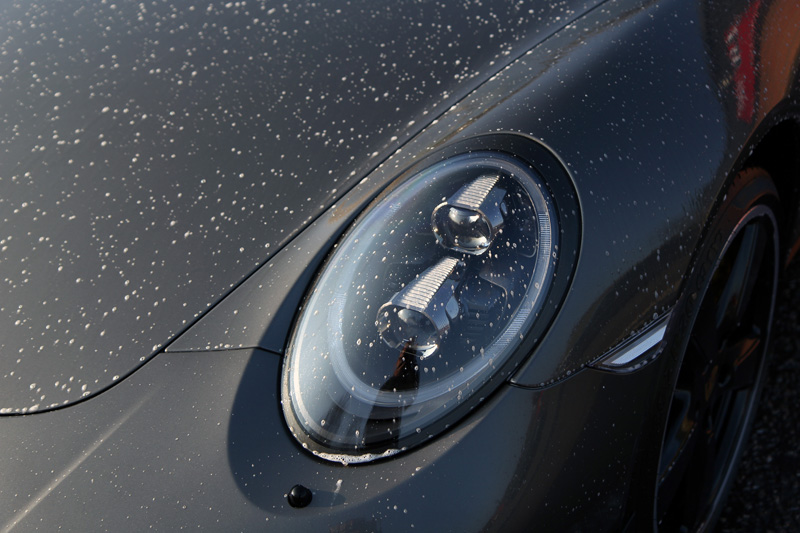 After rinsing, the car was pre-cleaned using Ultimate Snow Foam. This high foaming pre-wash is applied using a foam lance attached to a pressure washer. The formulation of the snow foam works with the pressure created by the washer (in this instance, a Kranzle K-1152) to form a thick blanket of foam that completely covers the vehicle. As the foam dwells, it lifts larger particles of dirt and grit away from the surface of the paintwork allowing them to be safely rinsed off. 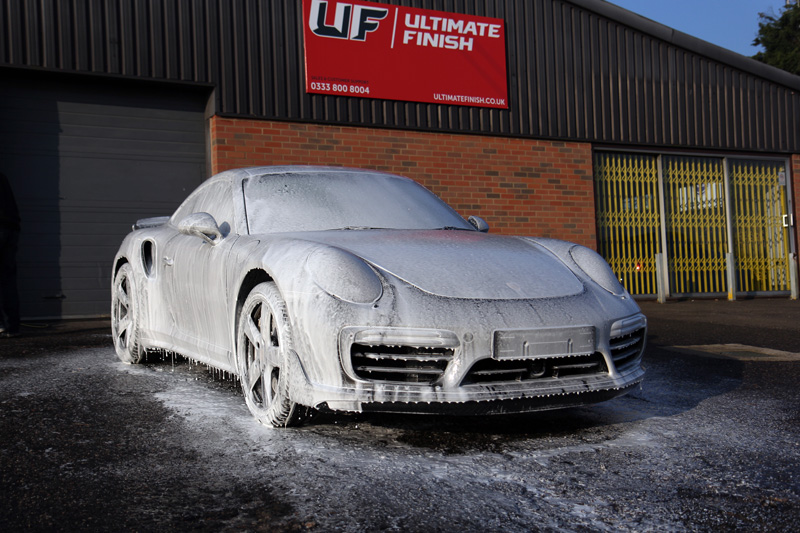 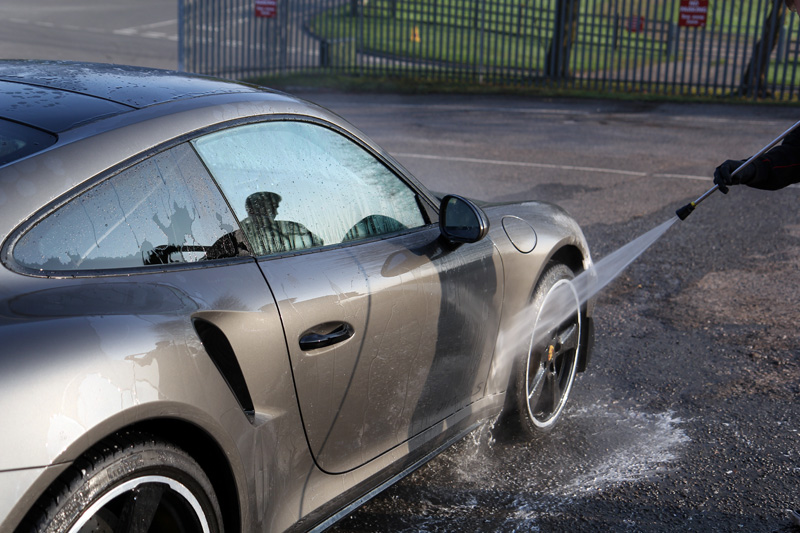 After rinsing, a second application of Ultimate Snow Foam was used as a lubricant for a clay mitt designed to shear any stubbornly bonded contamination to leave the paintwork as smooth as glass to the touch.

After rinsing the foam away, the Turbo S was washed using the Two Bucket Method, an Ulti-Mitt Double Sided Merino Wash Mitt and Gtechniq G-Wash, a pure shampoo free from gloss enhancers and additives. This is free from any residues that may later interfere with the ability of the protective nano-coating to bond with the clearcoat. An Aqua Gleam De-ionising Water Filter was attached in-line with a hose to provide a final, pure water rinse, eliminating the chances of water spot marks from forming on the paintwork. The Turbo S was then dried using Ultra Soft Microfibre Drying Towels and raised on a hydraulic ramp. All four wheels were removed and the two damaged ones sent for refurbishing. The paintwork was then inspected for defects using a SCANGRIP Sunmatch close inspection lamp.

The SUNMATCH lamp is ideal for close inspection work. The ultra-bright LEDs highlight swirls, scratches, staining, etching from acid rain and bird lime and so on. Any issues are carefully noted on the Vehicle Appraisal Form for later reference so they can be addressed during the machine polishing stage. Unsurprisingly, as the owner had brought the car in shortly after collecting it, and the fact that Porsche paintwork tends to be quite hard, there were very few marks visible at all. – Matt Back, UF Detailing Studio

To ensure that gloss levels were optimised, the paintwork was refined by hand using Menzerna Super Finish 3500. Super Finish 3500 uses diminishing abrasives to make short work of light scratches, swirls and holograms, even on scratch-resistant paintwork. After which the panels were sprayed with Gtechniq Panel Wipe and buffed off with soft edgeless microfibres to remove any remnants of polish residue.

Ensuring polish residues are removed is an important preparation step prior to applying a sealant as the performance of these coatings is based on their ability to form strong chemical bonds with the clearcoat. Polish residues interfere with that process and as a result, the coating won’t function correctly or last as long. Any substrate due to be coated must always be cleaned thoroughly to ensure the best possible results. – Matt Back, UF Detailing Studio

The owner had previously opted for Gtechniq’s flagship sealant combination Crystal Serum Black when his Cayman GT4 was treated and had been so impressed with the performance that requested the same be applied to the Turbo S. 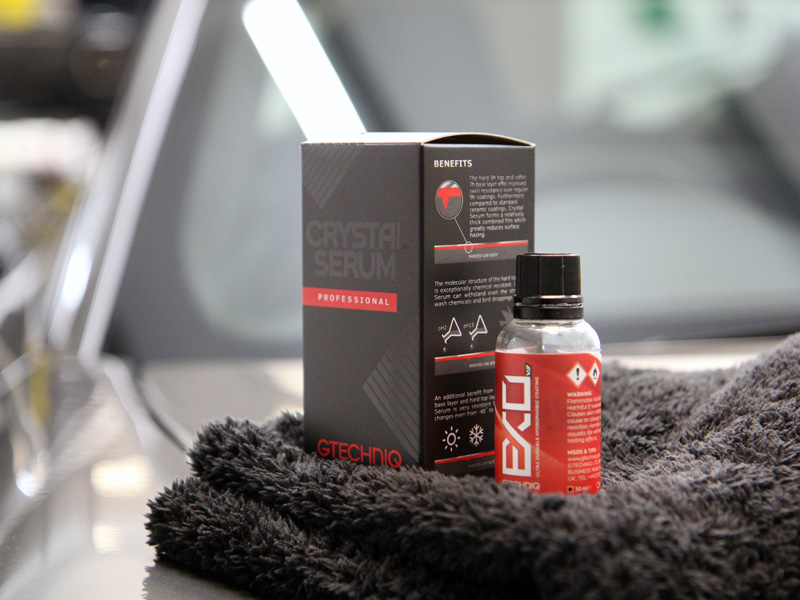 Gtechniq Crystal Serum uses the very latest nanotechnology to produce a coating that goes on as one layer but cures as an upper and a lower layer. The lower layer, closest to the clearcoat, cures to a hardness of around 7H on the pencil scale to provide flexibility to the coating. The upper layer cures to around 9H, providing a tough, swirl resistant hydrophobic, non-stick coating, virtually impervious to extremes of pH. Water and waterborne contamination cannot adhere as effectively to treated surfaces, so subsequent cleaning is far easier than it otherwise would be. Rubbing at the paintwork with a wash mitt to remove contamination is, therefore, unnecessary, helping to protect against wash-induced swirl marks. After allowing Crystal Serum to cure for around three hours, a top layer of Gtechniq EXO v3 Hydrophobic Coating was applied to enhance the water beading effect and further increase gloss levels. This combination is referred to as ‘Crystal Serum Black’ often shortened to ‘CS Black’. 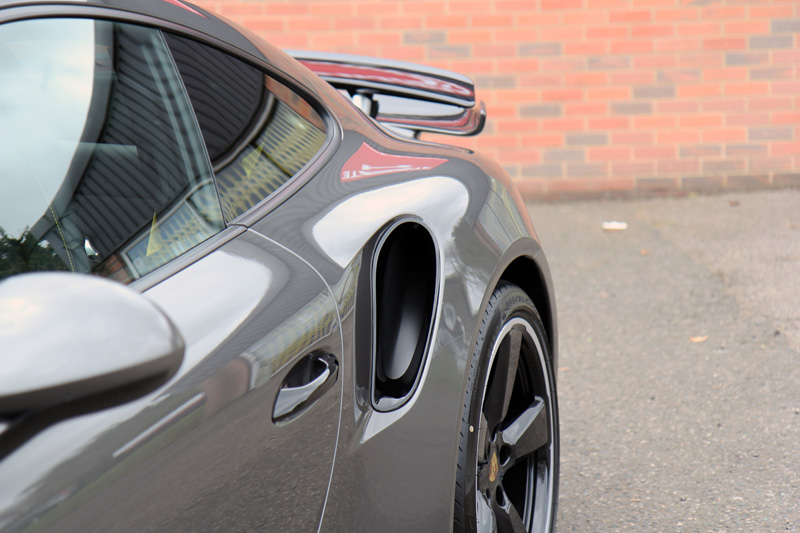 The refurbished wheels were returned and all four wheels sprayed with Panel Wipe. Then, to protect from the build-up of dirt and road grime becoming hard-baked onto the surface, the wheels and brake calipers were coated with Gtechniq C5 Alloy Wheel Armour. Heat resistant and able to withstand extremes of pH, C5 will provide protection for up to twelve months. 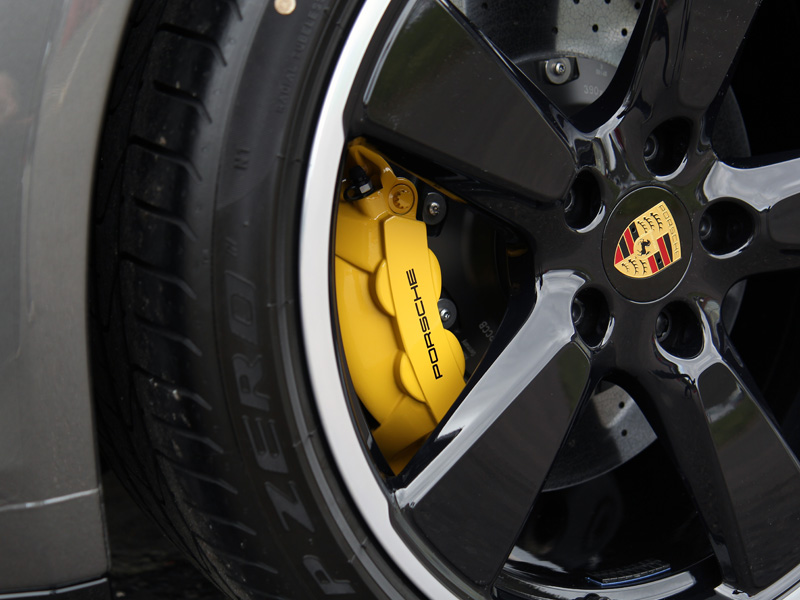 The new 991 Turbo S was now fully protected and ready to face the best and the worst the British weather had to throw at it. Once again, the owner was delighted with the results. 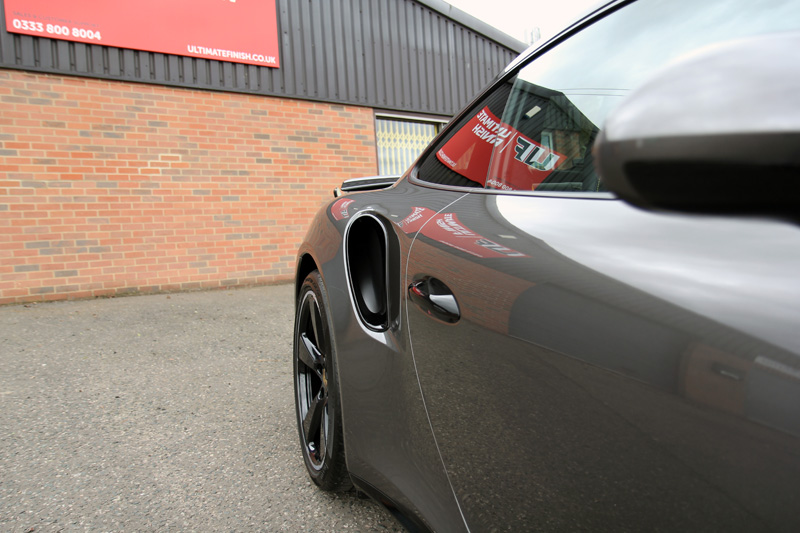 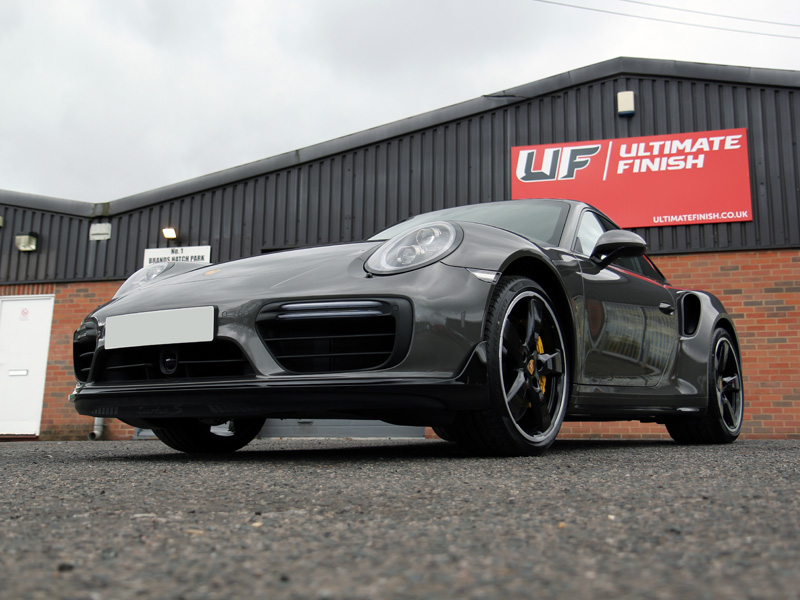 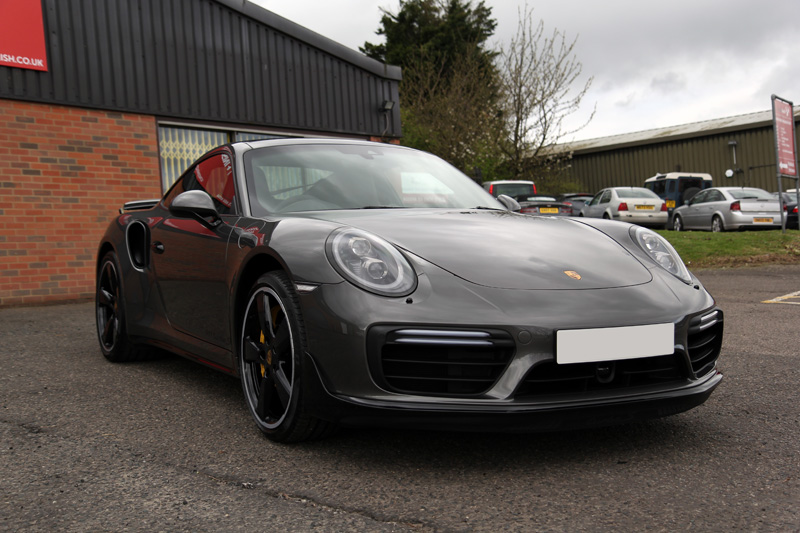 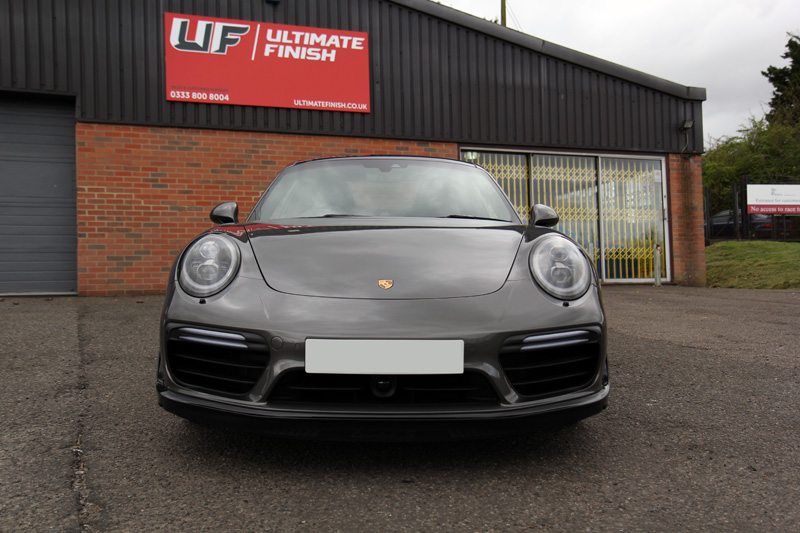