Nanotechnology And Its Role In Automotive Surface Care 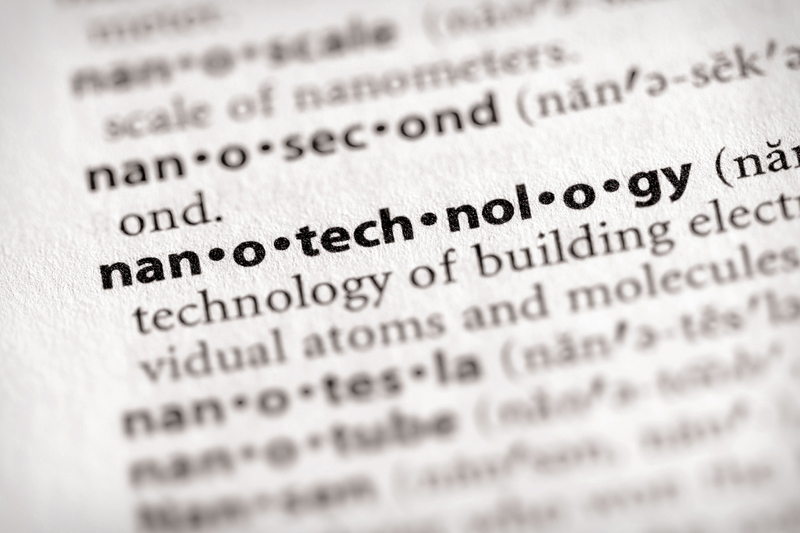 Defined simply, nanotechnology is the manipulation of matter at subatomic level (smaller than an atom). ‘Nano’, like ‘milli’, is actually a unit of measurement.

Nanotechnology is the science that deals with structures with at least one dimension measuring between 1-100 nanometres (1nm = 1 billionth of a metre. – National Institute for Nanotechnology (Edmonton, Canada)

Materials structured on the nanoscale can have properties quite different from those of the same substance in a bigger form. This is because the ratio of the surface area of a material relevant to its volume plays a crucial role in its performance. Nanoscale materials have a greater proportion of their atoms on the surface than bulk materials and this affects many properties including strength, melting point (or heat resistance) and hardness. In addition some compounds when reduced to the nanoscale become optically clear (i.e. they do not scatter visible light) but retain their UV absorption properties. All of which are highly desirable properties for sealants designed to protect automotive surfaces. 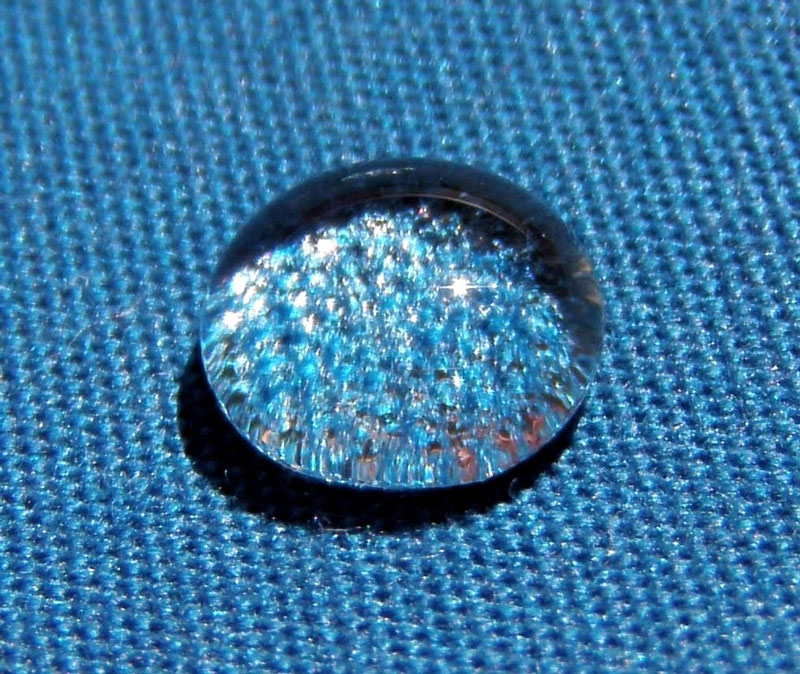 ‘Smart’ materials have the ability to interact with their environment. ‘Smart’ battery chargers react to drops in battery levels, smart coatings constructed on a nanoscale react to prevent ingress of water or dirt. Indeed in 2003 a popular science book on nanotechnology proposed the idea that:

Suppose that stain preventers could be incorporated permanently into clothing so that spills would no longer mean a trip to the dry cleaner. Suppose that automobile windscreens did not get wet so that no ice would ever form on them and rain could not impede visibility – (Ratner & Ratner, 2003) 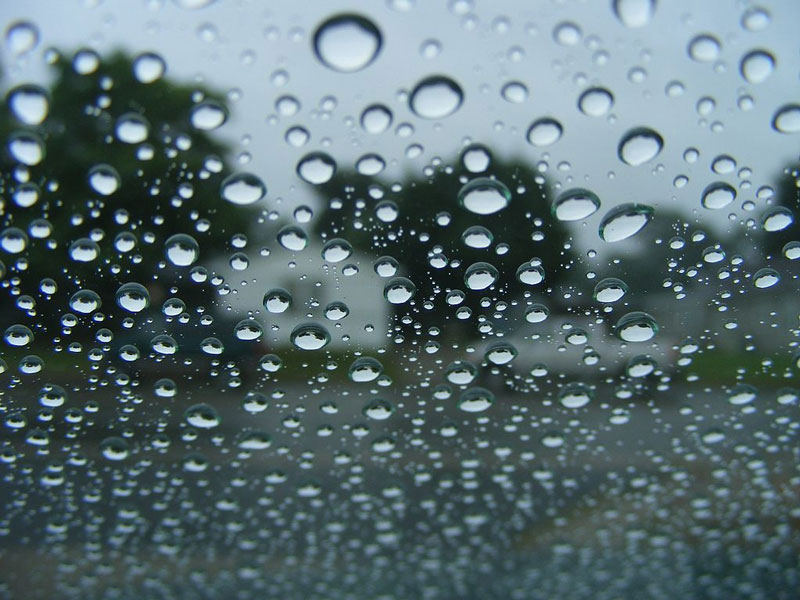 Hydrophilic, Hydrophobic or Superhydrophobic? Metals are inherently negatively charged and therefore hydrophilic (water loving). This means that water droplets (and the contaminants within them) falling on to the unprotected surfaces of your car, inherently form low contact angles, spread out and wet the surface thus leaving their contents behind.

Hydrophobicity is an important factor in any automotive sealant (be it a natural carnauba wax or synthetic). Unavoidably, rain carries with it industrial, chemical and environmental contaminants which quickly adhere to automotive surfaces. A hydrophobic barrier encourages the water to bead and roll away taking with it the contamination, rather than settling onto the underlying surface. This is often referred to as self-cleaning and makes washing the vehicle easier as the surfaces are less contaminated. This in turn reduces the risk of introducing swirls and scratches.

When a droplet of water rests on a surface, there is a contact angle measured at the edge of the droplet. (figure 1. below)

When the water contact angle becomes greater than (>) 150 degrees (C) the surface is deemed as being superhydrophobic (commonly termed the ‘Lotus Effect’ after the leaves of the lotus plant). Superhydrophobic surfaces are highly hydrophobic, i.e., extremely difficult to wet and have a roll-off angle that is typically less than 10 degrees. 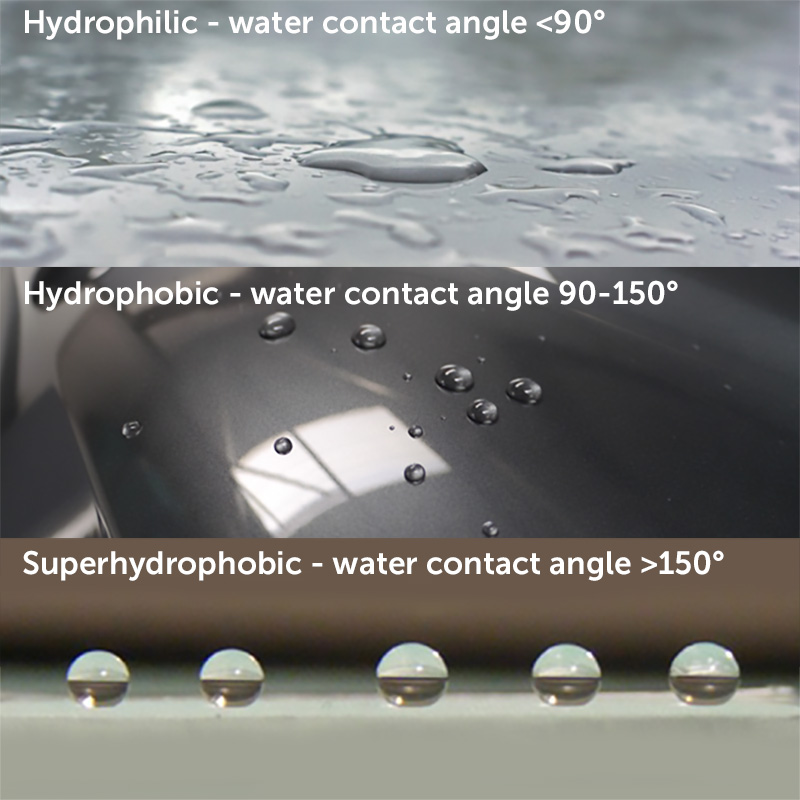 It is commonly accepted that superhydrophobic surfaces are achieved by increasing the roughness of an intrinsically hydrophobic substrate in order to maintain the highest water contact angle. Currently the science of nanotechnology has not advanced enough to produce stable, optically clear superhydrophobic coatings suitable for automotive sealant applications where both stability and clarity is a prerequisite.

We are, however, seeing major leaps forward in automotive surface nanotechnology with new sealants from companies such as innovative Japanese manufacturer Kamikaze Collection and UK-based Gtechniq leading the way.

Products such as Kamikaze Collection ISM Hydrocarbon Coating and Gtechniq EXO v4 utilise a sol-gel chemical process to put down a self-organising interlaced molecular net of silica and other nano-scale components to form an extremely thin (< 0.1 micron) transparent glass-like coating that chemically bonds to the paints clear coat.

Whilst this new generation of products do not quite match the superhydrophobic attributes demonstrated by Mother Nature’s Lotus leaf, they do possess exceptional hydrophobicity (water resistance) and oleophobicity (oil repellance), the combination of which assists these coatings in obtaining their exceptional self-cleaning properties.

As momentum in this sector gathers pace, it won’t be too long before scientists produce the first genuine superhydrophobic coating, until then watch this space! 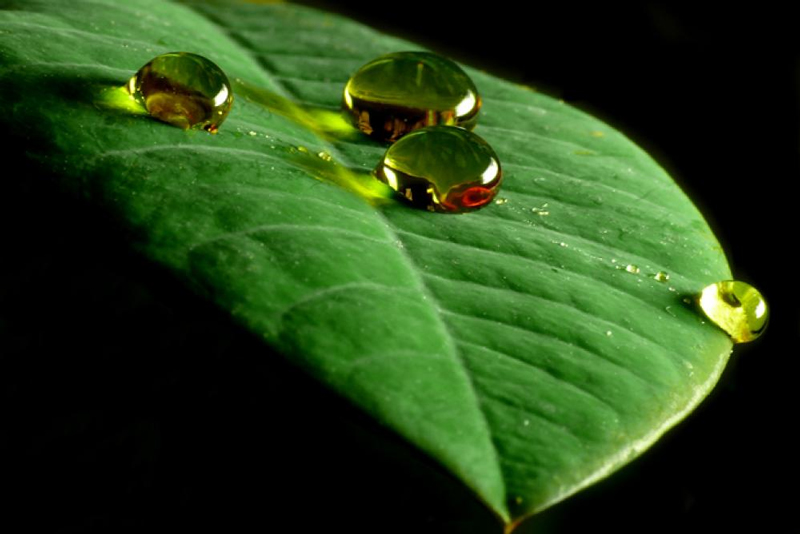 Established in 1999, Ultimate Finish is the UK’s leading supplier of high-quality car care and car detailing products. Based at the world-famous Brands Hatch motor racing circuit in Kent, we offer onsite car care training and award-winning detailing services, with the best bits showcased right here on the UF Blog.

Is it time to invest in a new pressure washer? Check out the new offering from Bigboi, exclusively available to buy from #UF.

NEW BLOG: Audi S7 Vorsprung TDI Quattro receives a New Car Protection and Alloy Wheel Protection! Take a read, there are more than a few handy #carcare tips that you might find useful this weekend.

If you've bought, or are buying a new car for 2020 you'll want to maintain that 'new car' appearance as best you can. With a Kamikaze Collection coated car you can. Find out who your nearest certified dealer is below.

We have a number of dedicated interior cleaners which remove dust, fingerprints and stains from all surfaces of your car, including plastics, fabric, leather, vinyl and metal trim.

Morning all! The #UF online shop remains open and we're delivering as normal where possible.

Paint protection courtesy of Kamikaze Collection UK, take a read of how the #UF Studio made the orange paintwork on this McLaren 'Pop'!