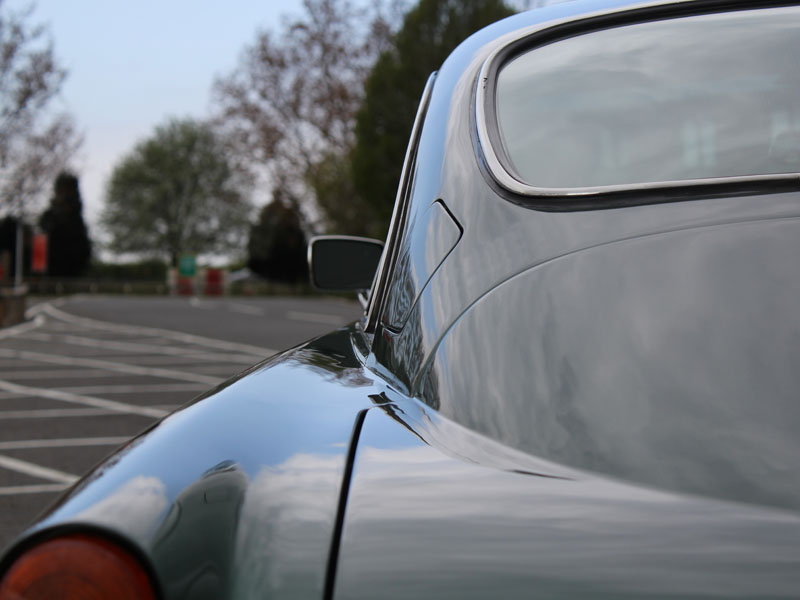 The Aston Martin DB5 – the Grand Tourer designed by Aston Martin to supersede the shorter, smaller DB4. The DB5, (DB in honour of David Brown, owner of Aston Martin from 1947 – 1972) featured reclining seats, wool pile carpet and full leather trim all as standard – no wonder it was the car chosen by James Bond! 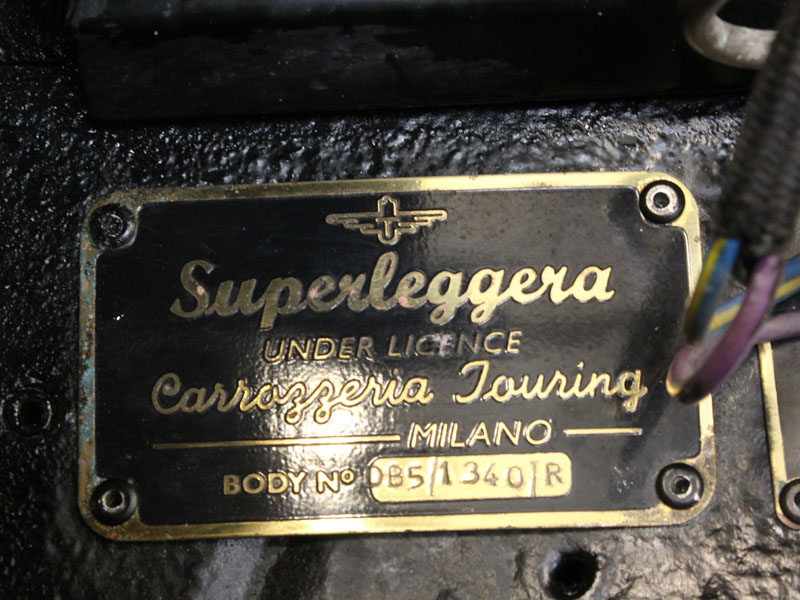 Aston Martin only made eighty five DB5s with the 4 speed gearbox. After that the gearboxes were all German-built 5 speed units, so to have the last model produced here in the studio was very special. It’s amazing what came as standard on these cars – disc brakes all round! And the original owner had opted for lots of extras so it had Marchal headlamps and even a Motorola radio! – Master Detailer, UDS

Originally this particular DB5 was dark blue, but during an extensive body-off complete restoration between 1994 to 1996, the owner opted for a respray to metallic green. Subsequently the car had been very well looked after but even so, the new owner wanted to make sure the DB5 was as pristine as possible. So he brought it into the Ultimate Detailing Studio for a Full Paintwork Correction, an Engine Treatment and an Interior Protection Treatment to preserve the leather.

I knew it was going to be a lengthy job requiring a good deal of preparation. Before I could start I needed to strip all the trim off the exterior so I had a clear run at the paintwork for machine polishing. I also needed to strip down parts of the engine so I could get to all the metal work to polish it properly. I didn’t want to leave anything out! – Master Detailer, UDS 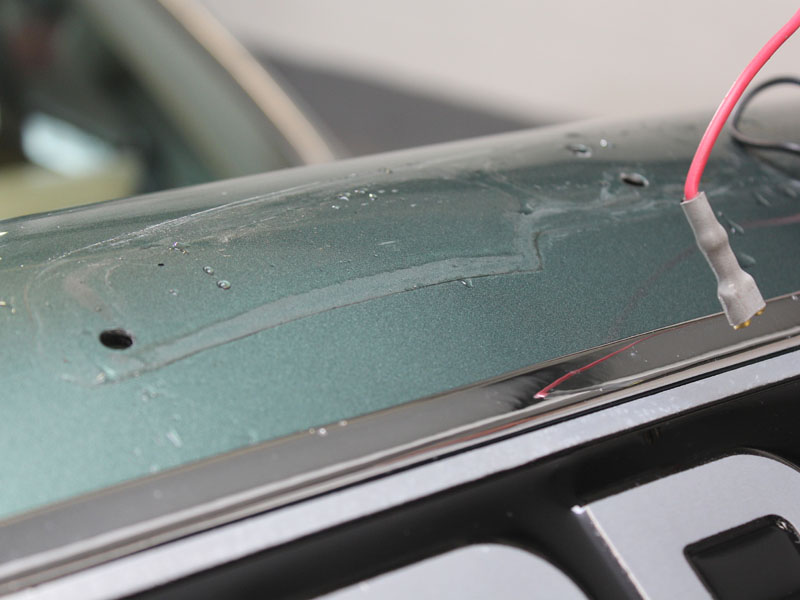 Removing these items left behind a black sticky residue of old, dirty glue which was removed using a steamer. 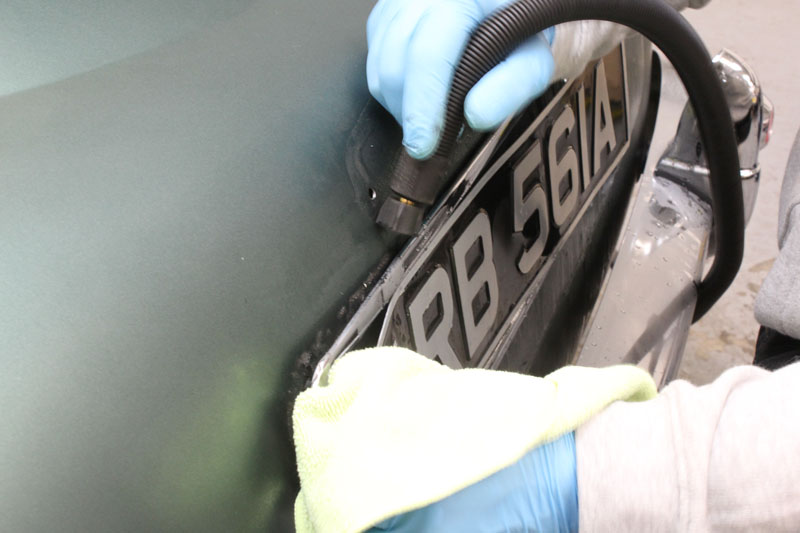 In order to fully assess the condition of the paintwork it was necessary first to decontaminate, degrease, pre-clean and then wash the DB5.

Initially the DB5 was treated with Bilt-Hamber Korrosol to remove any metal particle contamination, usually from brake dust from both the car’s own pads and from other cars when out on the road. The chrome wire wheels were then treated with Valet Pro Bilberry Wheel Cleaner to make sure any residue of road grime was removed.

Then the whole car, including the engine bay was degreased using Bilt-Hamber’s Surfex HD to remove any greasy oil contamination. A Valet Pro Large Sash Brush was used to get into the nooks and crevices of the engine before the whole car was rinsed clean. 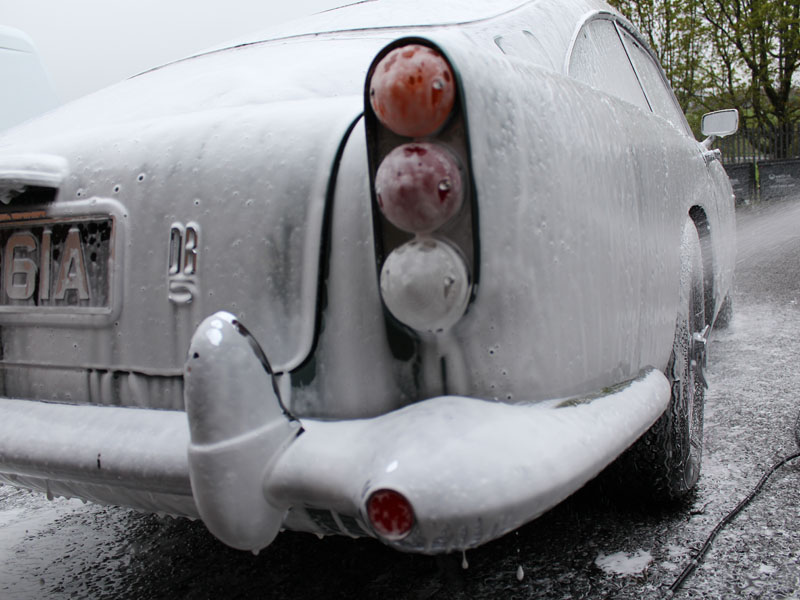 Using Swissvax Car Bath and the Two Bucket Method the DB5 was carefully washed, rinsed and then given a final rinse using an Aqua Gleam De-ionising Water Filter.

The engine was dried using a high pressure air blower and the bodywork was patted dry using Microfibre Madness Dry Me Crazy drying towels. As the final part of the preparation the bodywork and glass was clayed using Bilt-Hamber Auto Clay Soft.

The aluminium engine was polished by hand using Supernatural Fine Cut Metal Polish, a fine abrasive compound which burnishes the metalwork to a bright lustre. 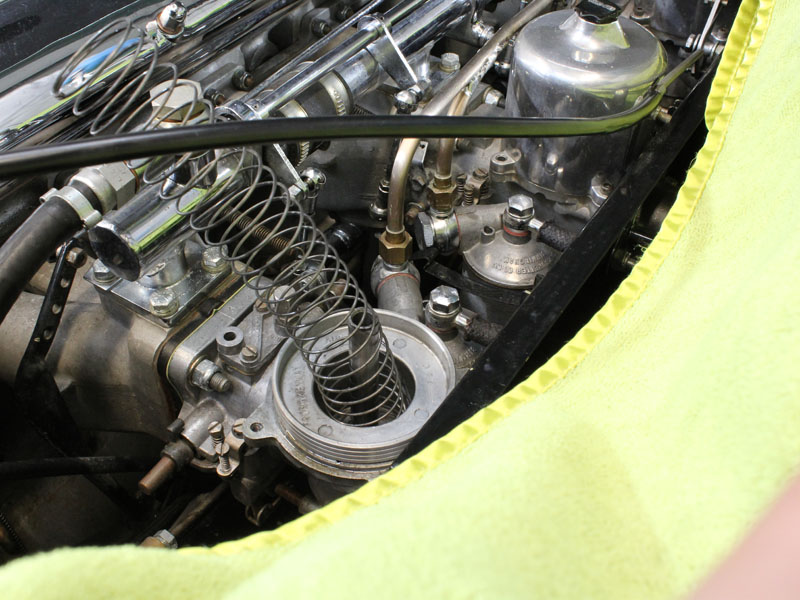 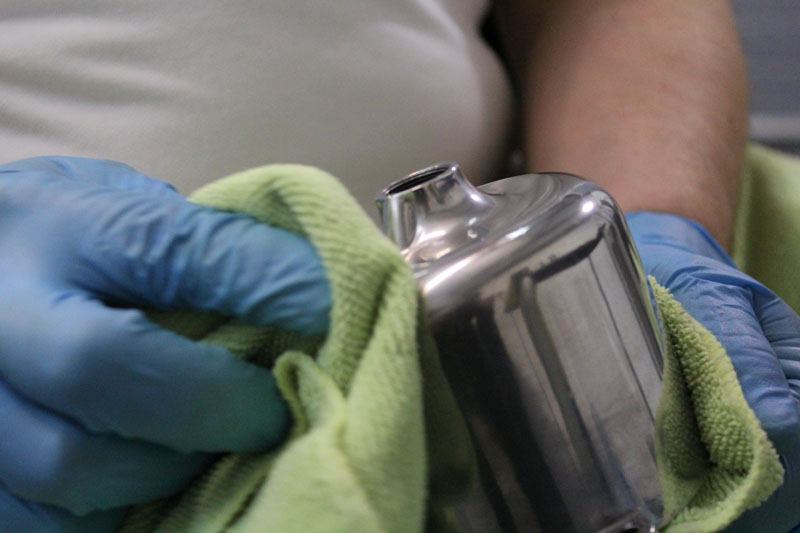 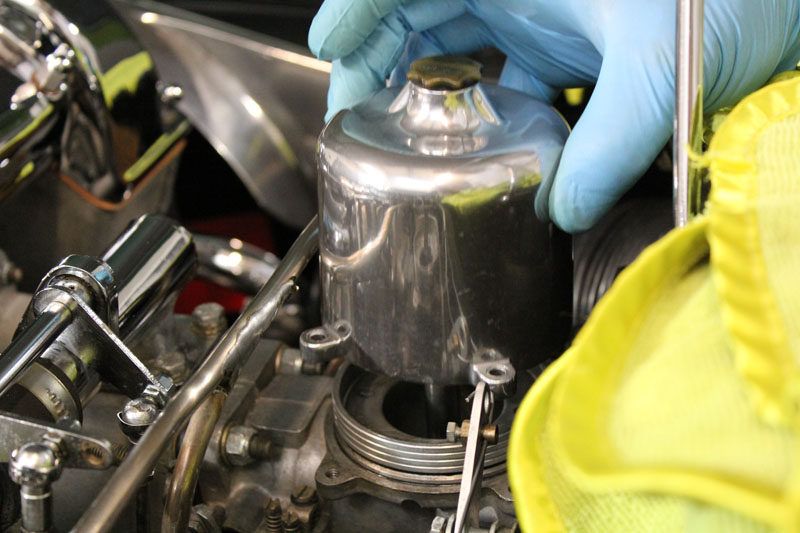 The underside of the bonnet lid was hand polished using SCHOLL Concepts S40 Anti-Swirl Compound, a polish with micro-fine abrasives designed to bring out a high gloss shine.

All the exterior metal detail was hand polished using Supernatural Fine Cut Metal Polish and the rubbers were all masked with detailing tape. This protects them from accidental contact with the machine polishing compounds which typically stain rubber trim. The final preparation stage prior to machine polishing was to treat the few stone chips with ChipEx Paint Chip Repair System.

Once the bodywork had been completely cleaned I used a high power LED lamp to get a better look at the condition of the paintwork and it really was in pretty good condition, with just the regular swirl marks and a few scratches. I was keen to get to work on it and really do justice to this lovely car. – Master Detailer, UDS

Next week: The Aston Martin DB5 is machine polished, protected and delivered to a very happy customer, so watch this space! 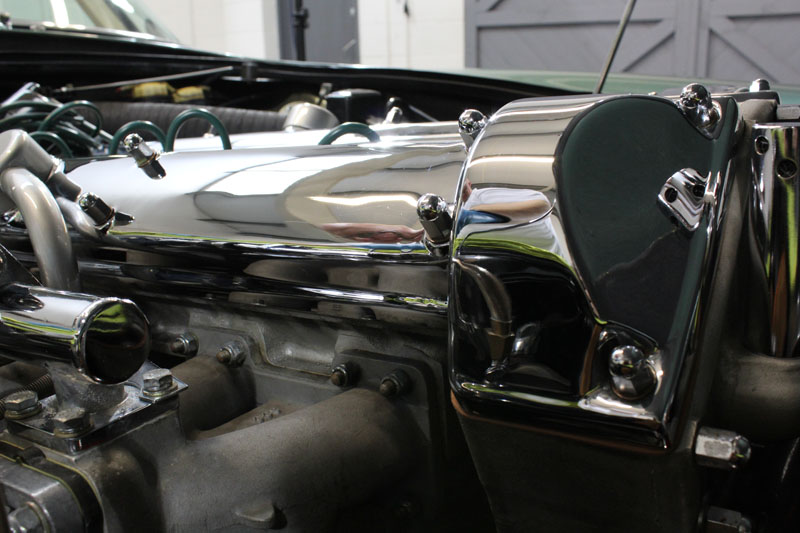