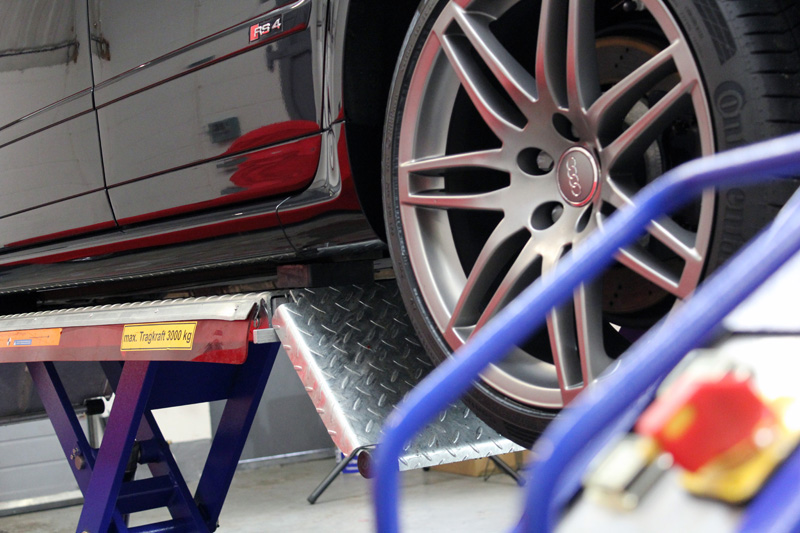 Audi’s RS4 Avant made estate cars sexy! It’s the perfect combination of practical family car combined with awe inspiring performance; little wonder the RS4 Avant has been the car of choice for many an adult looking to satisfy their inner Id on the way to collect the kids from school!

And so it held true for this particular RS4 Avant, having been owned since new by the same gentleman. He brought it to the UF Detailing Studio with a desire to have the paintwork completely restored, to allow him, as he put it, to ‘fall in love with it again’.

A cursory inspection revealed some dents to the bodywork on the near side and also on the bonnet. In addition the front of the car had some obvious stone chips, starkly apparent against the Phantom Black paintwork. Even before washing the car swirls and scratches were evident, so the RS4 Avant was booked in for Paintwork Correction supplemented with ChipEx Paint Chip Repair Treatment and to complete the makeover a Paintless Dent Repair (PDR) specialist was organised to take care of the dents whilst the car was at the studio.

Initially the RS4 Avant was treated with Koch-Chemie Reactive Wheel Cleaner, a specialist cleaner which changes colour on contact with ferrous contamination. Reactive Wheel Cleaner can also be used on bodywork, so the entire car was treated to ensure any iron particles (shredded from hot brake pads) were removed. The product shrinks the particles, breaking the bond with the underlying substrate and allowing them to be rinsed away. 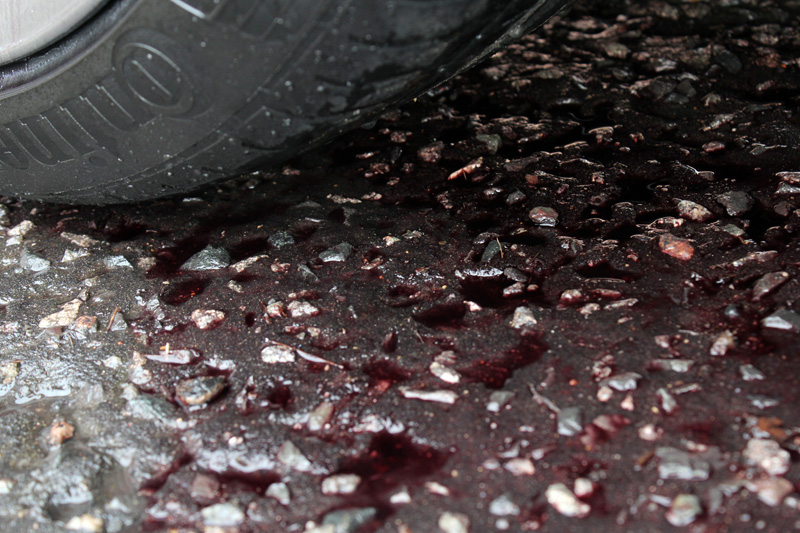 To dissolve sticky contamination such as tree sap and bug squash, Koch-Chemie Insect & Dirt Remover was applied to the bodywork and glass.

Next the bodywork was degreased using Koch-Chemie Green Star Universal Cleaner to remove surface oils and road grime. A stronger concentration of Green Star was used to treat the build-up of dirt in the boot, bonnet and door shuts, particularly around the catches. The engine bay was also thoroughly degreased to remove dirt that had accumulated from years of driving in all sorts of weather! 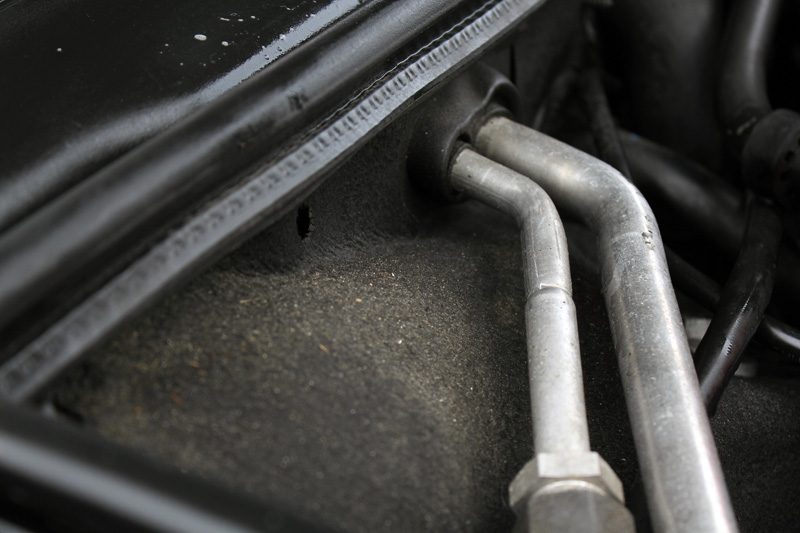 Then the RS4 Avant was pre-washed using Ultimate Snow Foam, a high foaming, non-contact cleaner which lifts larger particles of dirt and grit away from the surface of the bodywork. The particles become encapsulated by the foam and can then be rinsed away without contacting the paintwork with a wash mitt. This helps prevent incurring scratches during the wash process. 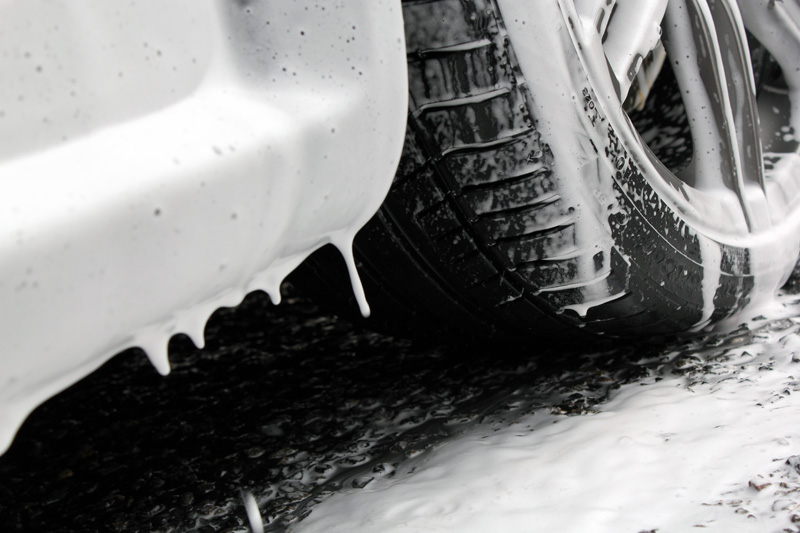 After rinsing, a second application of Ultimate Snow Foam was used as a lubricant for claying the paintwork with a clay mitt. This specialist mitt safely removes any remaining stubborn contamination such as tree sap and tar from the surface of the paintwork leaving it as smooth as glass to the touch. 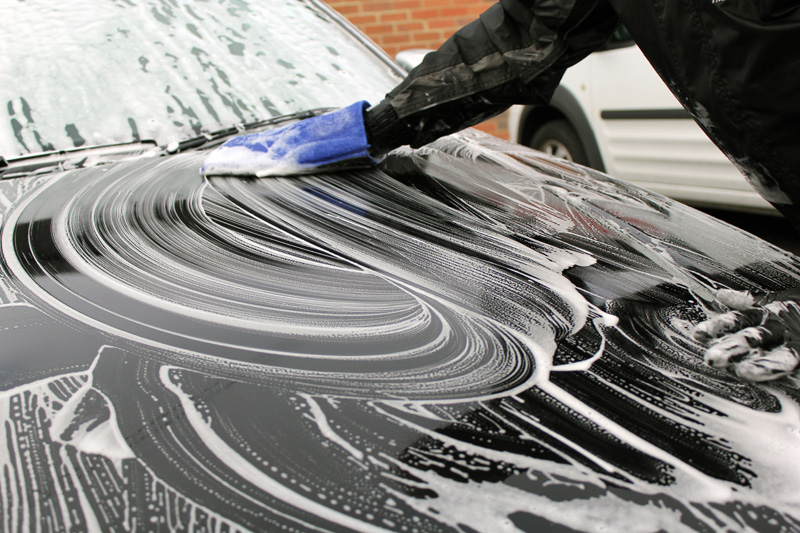 The Audi RS4 Avant was then rinsed before being washed using the Two Bucket Method, an Ulti-Mitt Double Sided Merino Wash Mitt and Koch-Chemie Nano Magic Shampoo. A separate UF Wheel Bucket was used for cleaning the wheels, preventing the potential transfer of grit to bodywork.

To avoid introducing water spots onto the clean paintwork, an Aqua Gleam De-ionising water filter was connected to the hose to give the car a final, pure water rinse. The car was then dried using UF Ultra-Soft Microfibre Drying Towels and brought into the studio where it was elevated on a hydraulic ramp for close inspection under high-intensity lighting. 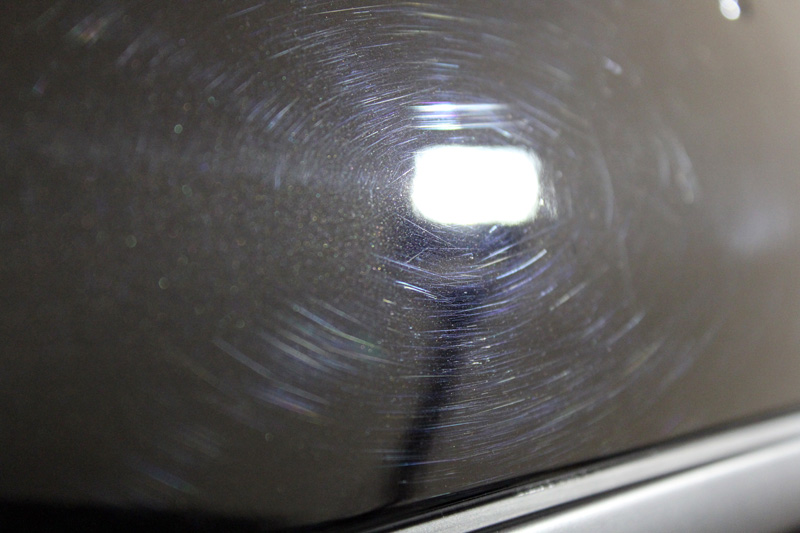 Under the lights it was easy to see the extent of the swirling and scratches. Although Audi paintwork is quite scratch resistant, this RS4 Avant is a 2007 model and has therefore been washed many times, which is usually when scratches and swirls are incurred. I needed quite a heavy pad and compound combination to remove the damage and oxidation to really bring the paintwork back to life. Koch-Chemie products were designed with German paintwork in mind so they were the obvious choice. – Derek Ginger, Master Detailer, UF Detailing Studio 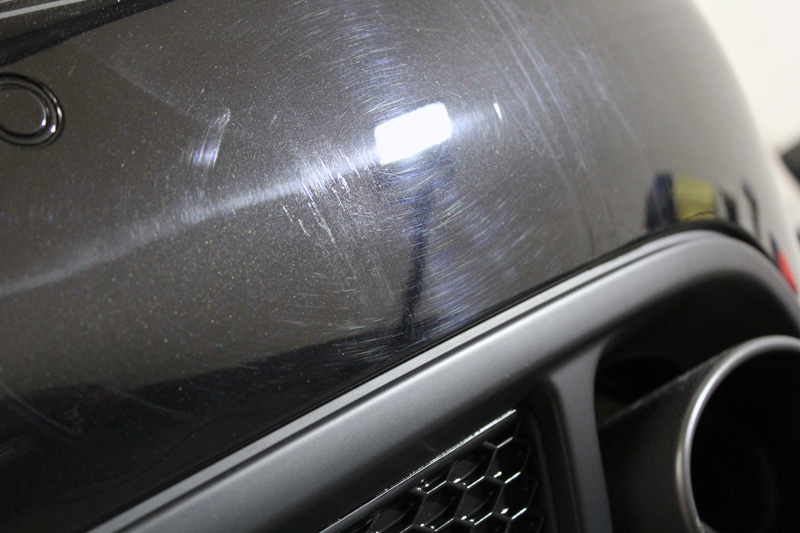 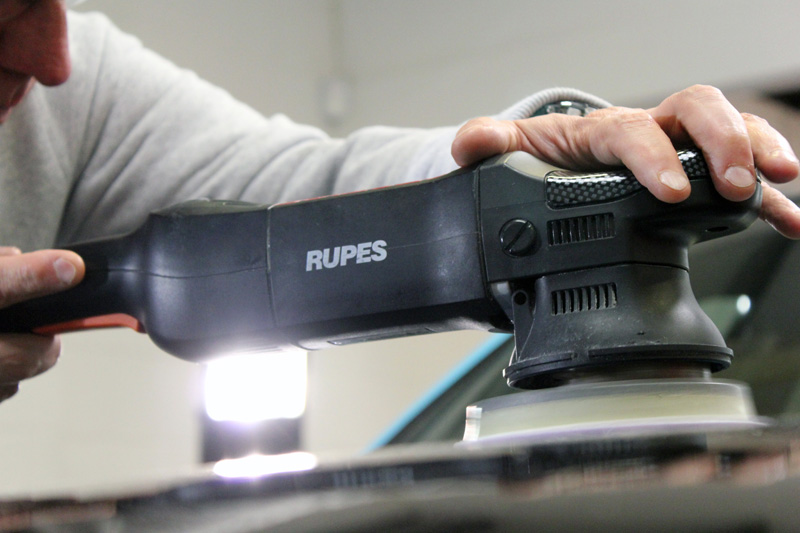 Once the initial correction had been completed the PDR specialist arrived to attend to the dents on the bonnet and down the nearside of the vehicle. 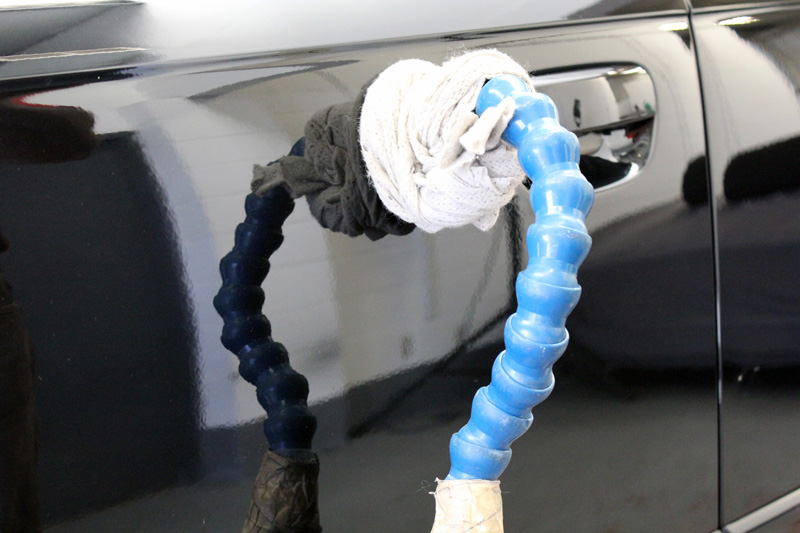 Once the dents had been removed the paintwork was refined using a FLEX PE14-2-150 Rotary Machine Polisher, a 3M Black Polishing Pad and Koch-Chemie M2.01 Hochglanz-Anti-Hologramm, selected for the diminishing abrasives which leave a high-gloss finish to paintwork. 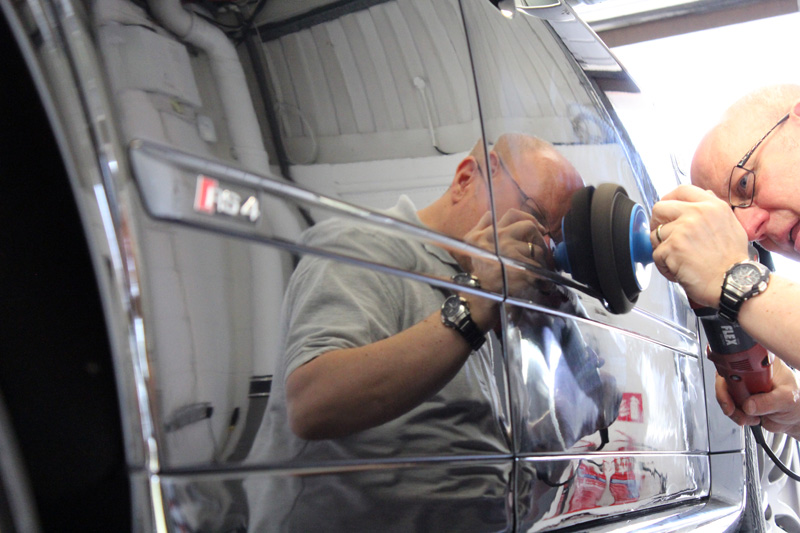 To treat the road-rash on the front of the Audi RS4, ChipEx Paint Chip Repair System was used. ChipEx uses the manufacturer’s paint code to match the paint colour exactly. Stone chips leave an unsightly gouge on the surface. The ChipEx system builds a fresh paint layer up to drastically reduce the appearance of the chip. 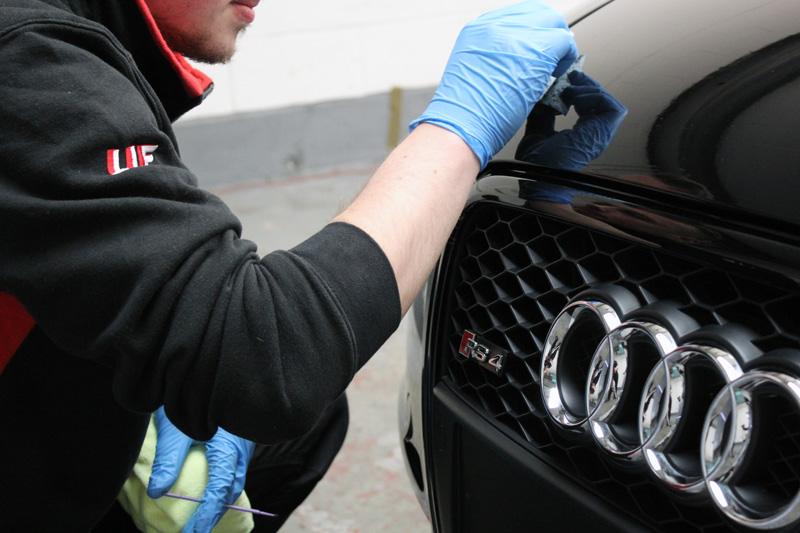 After cleansing the area with panel wipe the colour matched paint is applied to the chip in a ‘blob’ using a special applicator. It is then dabbed with the fingertip to flatten out the surface and left to cure for around ten minutes. Blending solution is applied to the ChipEx applicator pad and the area is wiped over to remove any unwanted residual paint. Finally ChipEx polish is applied to the treated area allowed to haze for short while and finally buffed off to a high shine.

To protect the now glossy finish on the bodywork, Koch-Chemie 1K-Nano sealant was applied. Unlike traditional nano-sealants, 1K-Nano is applied with a machine polisher allowing for more even layering, resulting in a stunningly slick and glossy finish. 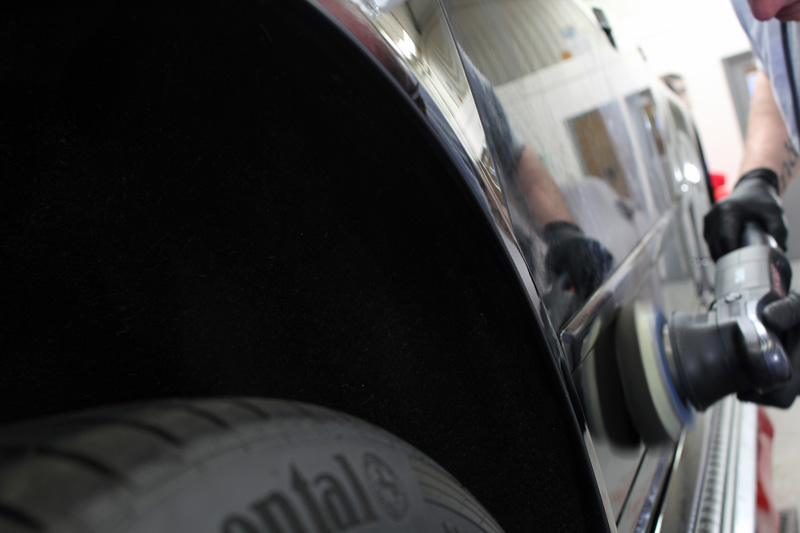 1K-Nano really does leave a slickness to paintwork that is hard to beat. The whole car looked as though it had been immersed in a black liquid. Water just beads straight off the treated surface so it stays cleaner for longer. It also prevents dirt from adhering to the surface so the car will be easier to clean during the weekly wash – and that’s a lot safer for the paintwork! – Derek Ginger, Master Detailer, UF Detailing Studio 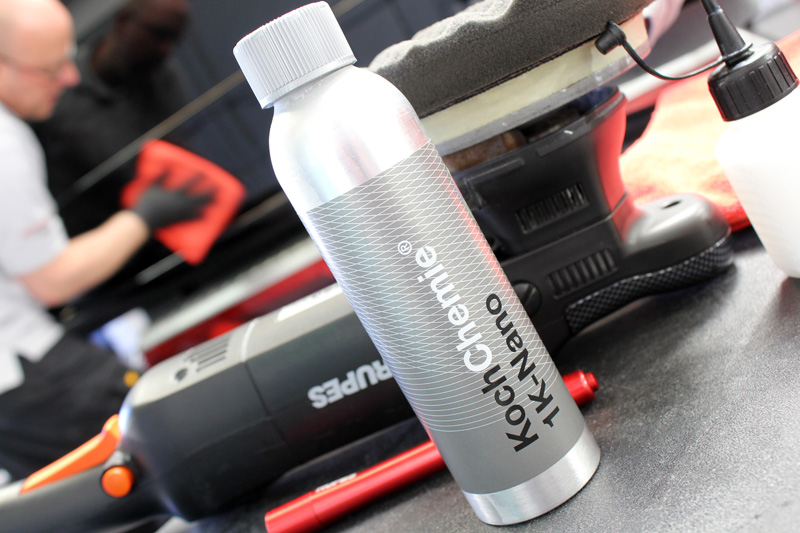 The glass was cleaned using Koch-Chemie Speed Glass Cleaner before being protected with Gtechniq G1 ClearVision Smart Glass. This sealant forms a hydrophobic barrier which encourages rain water to bead on contact, allowing it to be easily blown away even when driving at lower speeds. This makes driving easier and less tiring during inclement weather conditions.

The wheels were sealed using Gtechniq C5 Alloy Wheel Armour, a hydrophobic nanotechnology-based sealant resistant to high temperatures. Dirt, water and oils are repelled and brake dust particles are inhibited from adhering to the surface. Weekly wheel washing is easier and requires only a mild cleaner to remove contamination, rather than harsh chemical cleaners which degrade sealants and lacquers.

The tyres were treated using Gtechniq T2 tyre dressing to leave a natural satin sheen that completed the look. When the customer collected his RS4 he was absolutely delighted with the results, stating that the car looked better than it did even when it was brand new. Safe to say UF had achieved the brief: the customer fell in love with his Audi RS4, all over again! 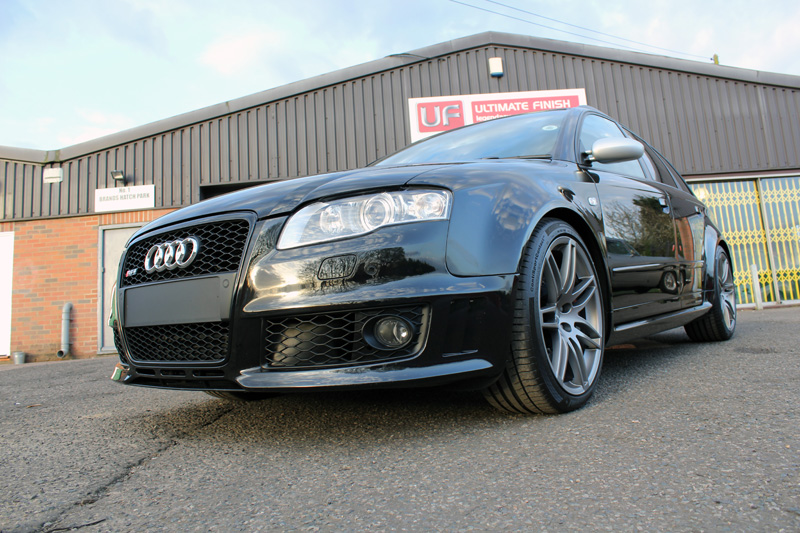 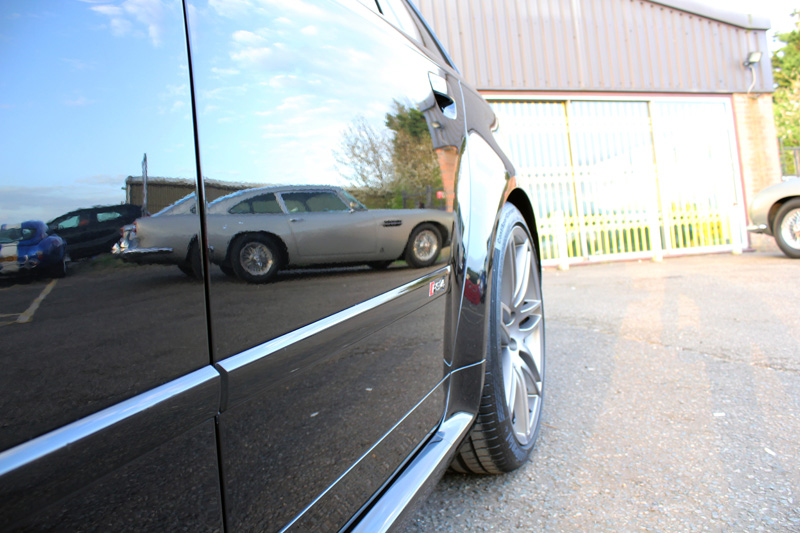