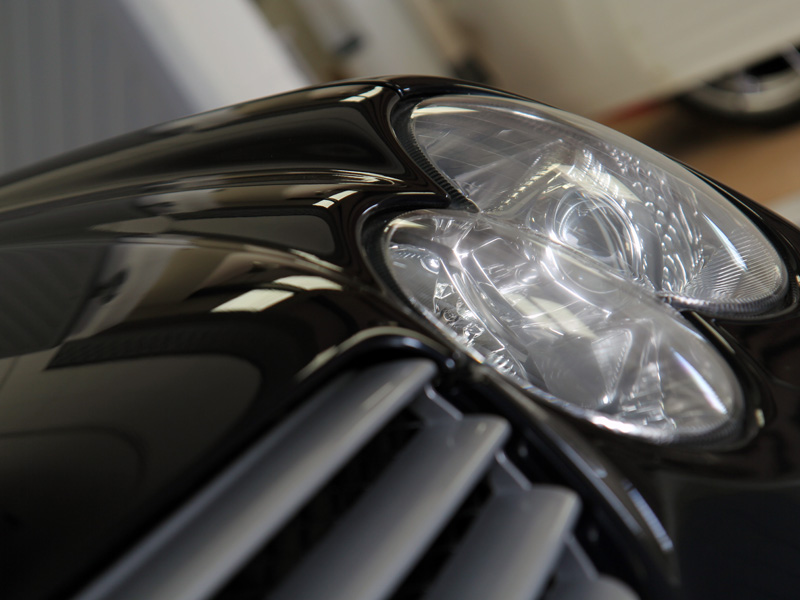 The Mercedes Benz SL55 is purely about style, handling and horsepower! The supercharged V8 engine is hand-built in Germany to exacting standards making the SL55 an exhilarating, high performance sports car capable of achieving 0-60mph in around 4.5 seconds. The handling is secure, made possible by the ABC Active Suspension that reduces body roll by around 70% (and up to 95% if the Sport mode is selected!) Steering wheel mounted gear changers respond instantly to commands whilst the Optimum Gear Selector mode lets the driver know when to upshift for maximum performance. Large, vented brakes operated by an electronic braking system simultaneously deliver variable braking pressure to each wheel for optimum stopping distances. Power, performance and the distinctive AMG body styling – the SL55 AMG has it all.

This SL55 AMG had been very carefully looked after by its owner and, given the 2003 registration had incredibly low mileage having completed just 37,000. The owner had decided it was time to treat his cherished car to a detail to remove swirls and scratches that had inevitably found their way into the paintwork. Once the paintwork was corrected he requested it be protected with Gtechniq’s innovative CS Black sealant combination.

Gtechniq Crystal Serum is an advanced nanotechnology-based sealant that offers enhanced levels of protection from wash induced swirling as well as industrial and environmental fallout. The sealant forms a strong chemical bond with the paintwork making it intensely durable, so much so that Gtechniq guarantees the sealant for seven years! Crystal Serum cures as a dual layer; the lower layer cures to 7h (on the pencil hardness scale) whilst the top layer curing to a hardness of 9h. This combination provides flexibility to the coating, making it even more durable and resistant to surface hazing.

CS Black involves an additional layer of Gtechniq EXO v2 being applied to add an extra level of slick, candy-gloss shine to the paintwork. EXO is also incredibly hydrophobic so enhances the performance of Crystal Serum. Dirty water, grit, road grime and even bird droppings will not adhere as firmly to a treated surface, making the car easier to keep clean without the need for harsh chemicals or intense ‘scrubbing’ with a wash mitt.

Initially however, the paintwork required some correction prior to the protective layers being applied, so the SL55 AMG was booked into UF’s Brands Hatch based Detailing Studio for Paintwork Correction Treatment.

The process begins with thorough decontamination. The bodywork and wheels were treated with Gtechniq W6 Iron & General Fallout Remover, a spray-on product that works on ferrous contamination. 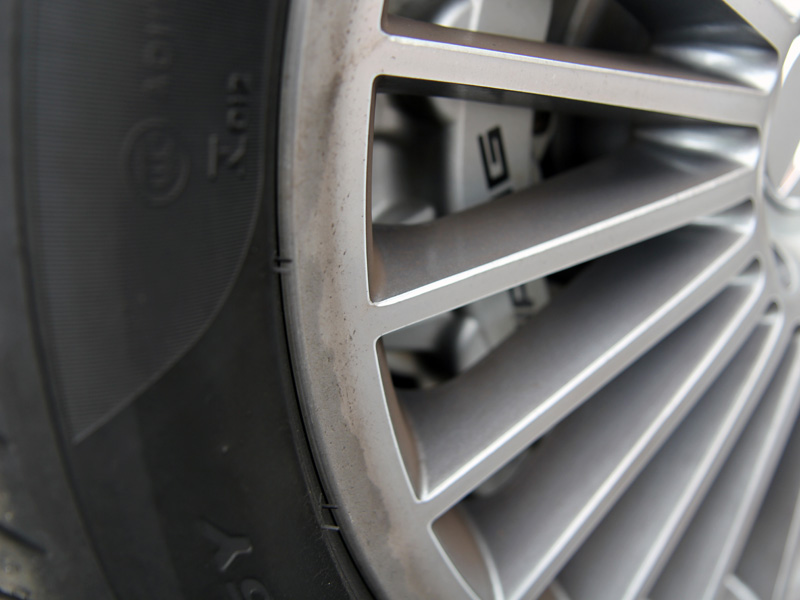 This type of contamination is largely caused by brake pads that shred under pressure. The hot, sharp particles bond to the substrate and enlarge as they oxidise, leading to pitting if not promptly removed. W6 changes colour on contact with the particles to highlight the contamination, then shrinks the particles forcing them to break their bond and allowing them to be easily rinsed away. 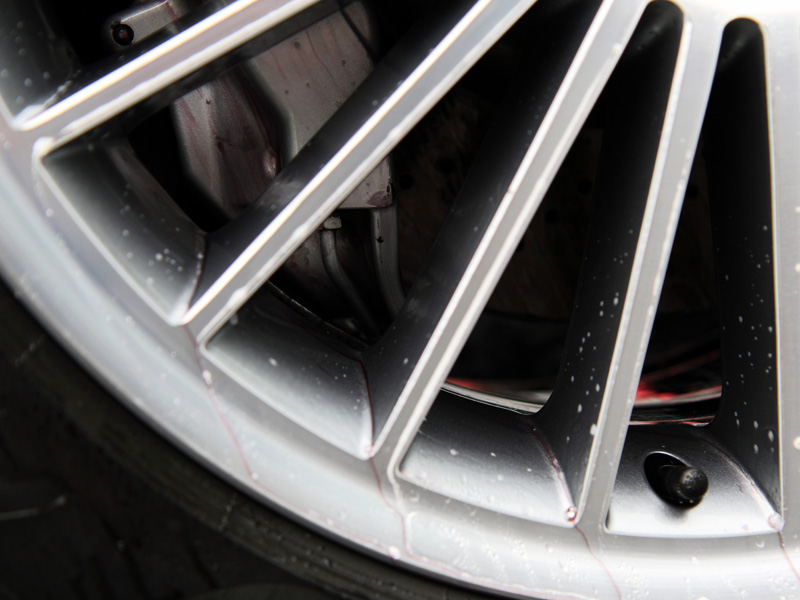 The car was jacked up to move the suspension, allowing for more thorough cleaning of the wheel arches. 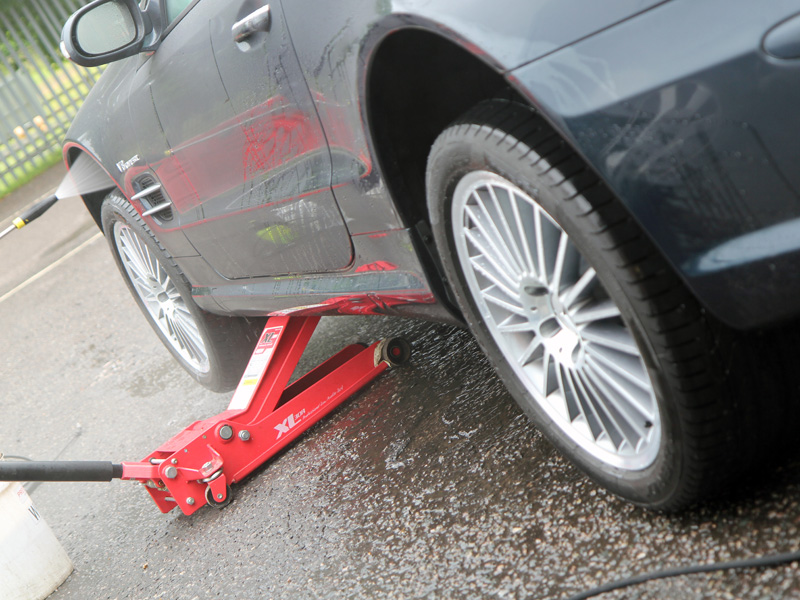 The bodywork was degreased using Gtechniq W5 All Purpose Citrus Cleaner. Particular attention was paid to the boot, bonnet and door shuts to ensure any grease build up was removed and sticky deposits such as tar and tree sap were dissolved. 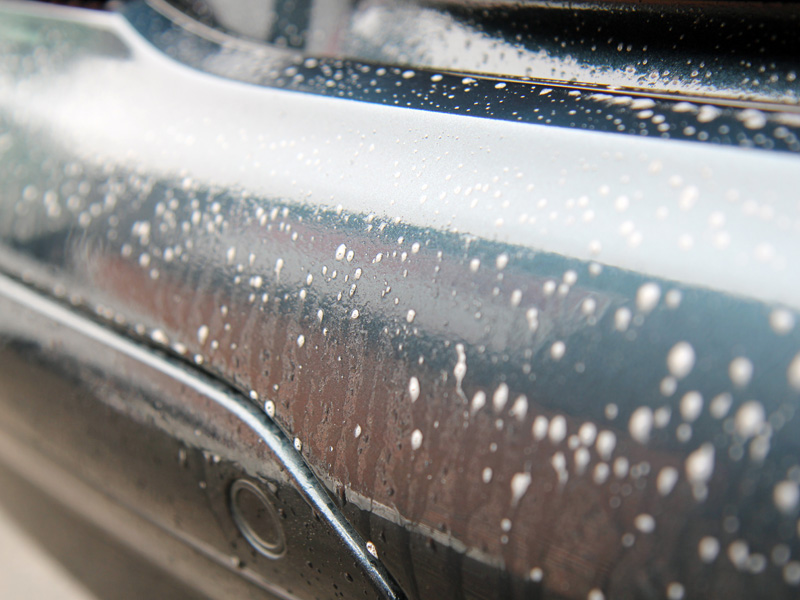 After rinsing the car was pre-cleaned using Ultimate Snow Foam. The thick foam lifts larger particles of dirt and grit away from the surface of the paintwork, allowing it to be rinsed away prior to the main wash. This makes the whole cleaning process much safer as it reduces the risk of introducing swirls and scratches caused by inadvertently rubbing the particles caught in a wash mitt on to the surface of the paint. 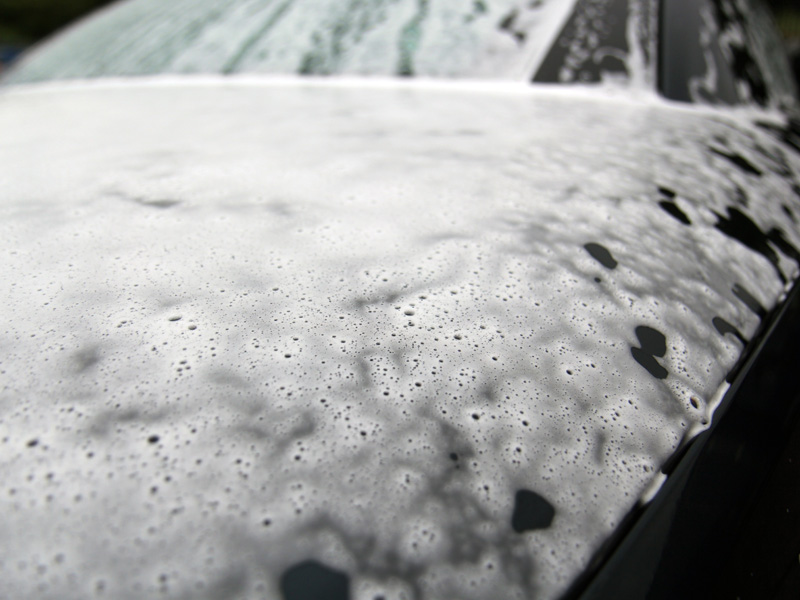 The SL55 AMG was washed using the Two Bucket Method, an Ulti-Mitt Double Sided Merino Wash Mitt and Gtechniq G-Wash. The wheels were cleaned thoroughly using a UF Wheel Bucket with Scratch Shield and UF Wheel Woolies to clean through the multi-spoke alloys. After rinsing, an Aqua Gleam De-ionising water filter was connected to the hose to give a final, pure water rinse. The car was then dried carefully using a blower to ensure all moisture was removed from around problem areas such as badges and grilles, as any retained water that later escapes during the sealing stage will interfere with Crystal Serum, especially if the sealant is not fully cured. 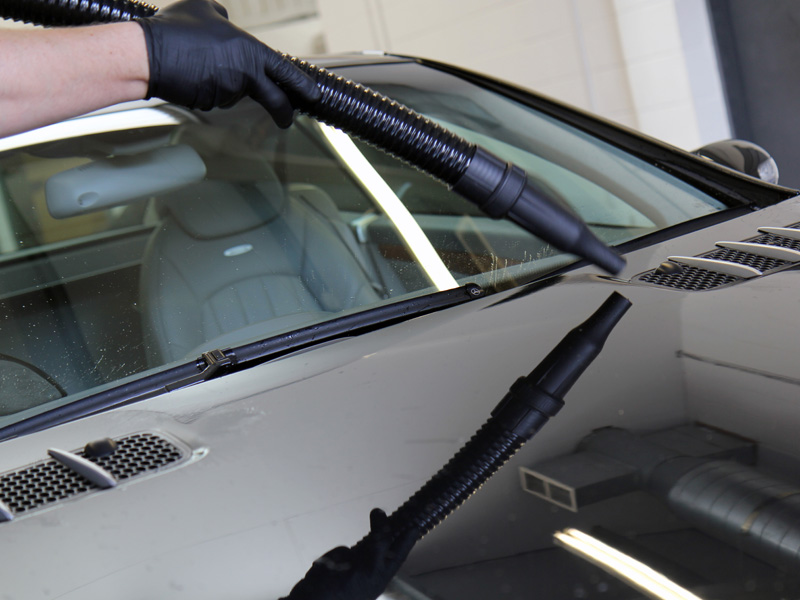 Now decontaminated and thoroughly cleaned, the SL55 was brought into the studio and the paintwork was inspected under high intensity lighting to reveal the extent of the swirling and scratches. Multiple paint depth readings were taken for each panel and found to be within expected levels, indicating the car had not been re-sprayed.

Considering the car is twelve years old the paintwork was in really good condition. Yes, there were plenty of swirls and scratches but I’ve seen far newer cars in much worse condition! It was obvious the customer had done his best to look after it. – Derek Ginger, Master Detailer, UF Detailing Studio

The customer had asked for some intrusive stone chips to be taken care of prior to the machine polishing and these were addressed with the ChipEx Paint Chip Repair System that uniqually uses the manufacturer’s paint code to exactly match the paint colour. 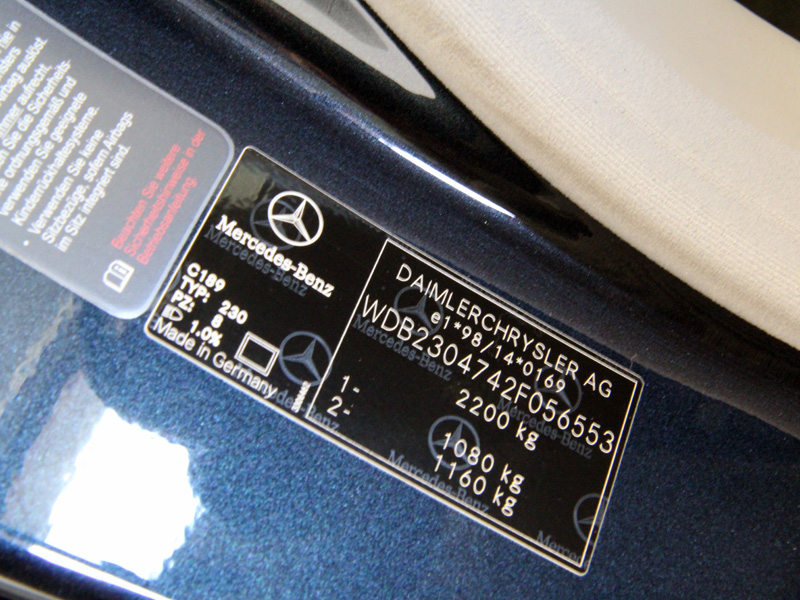 After cleansing the areas to be treated, the paint is applied with a special applicator to help build up the crater left by the stones impact. This is then blended and allowed to cure before being refined and finished. The difference it makes is remarkable.

The SL55 AMG was raised on the hydraulic ramp to allow for easier machine polishing. 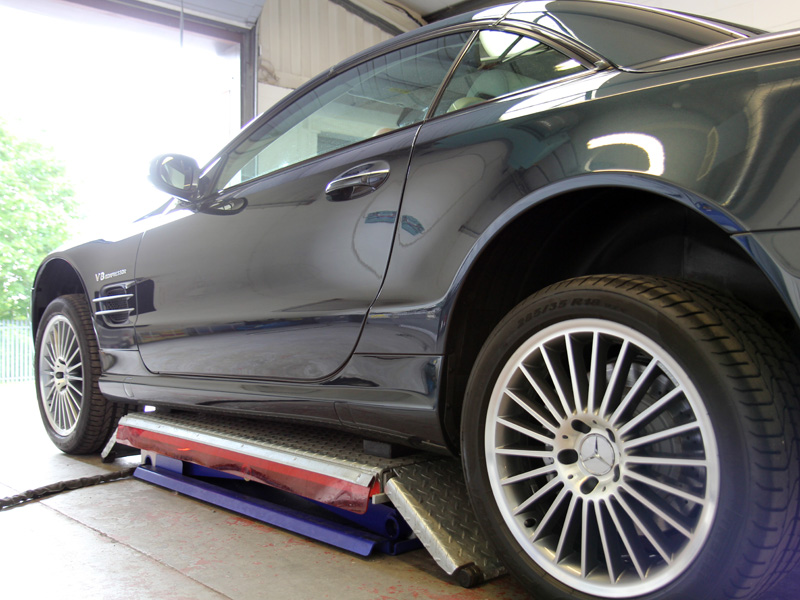 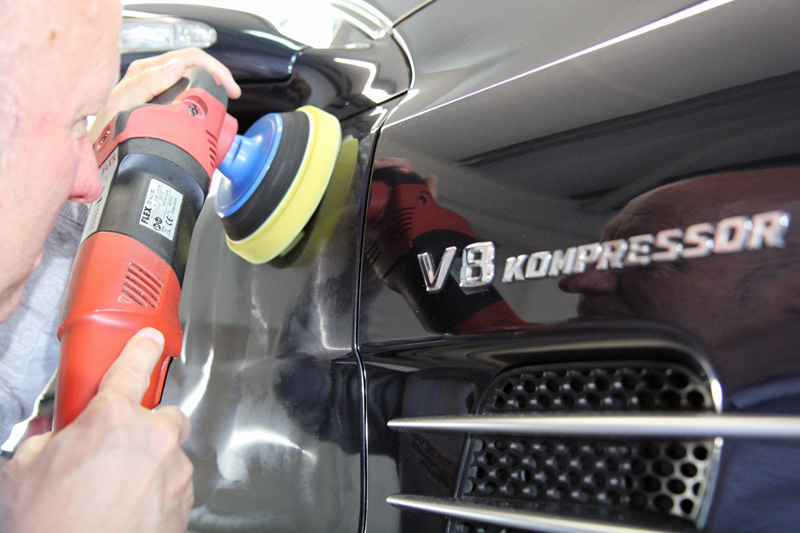 The refining process was then carried out using a 3M PERFECT-IT III Blue Polishing Pad and Koch-Chemie M2.01 Anti-Hologramm. 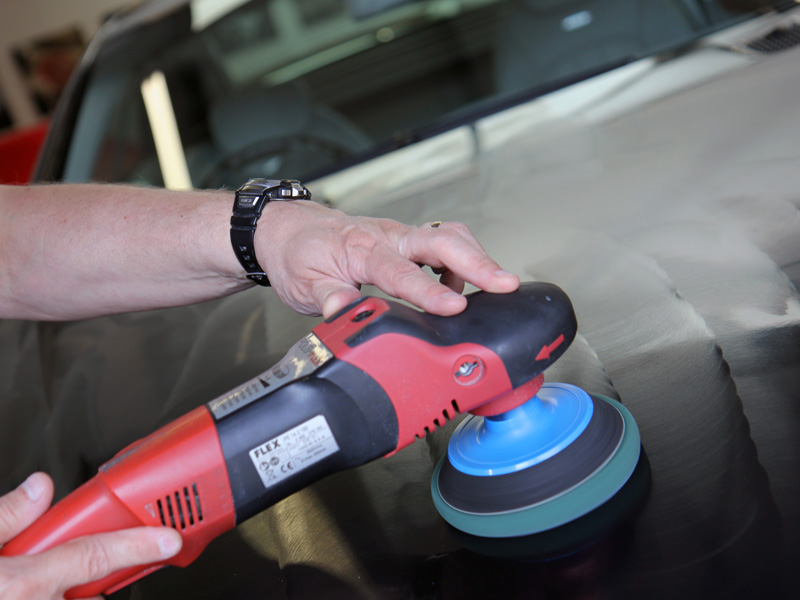 Then, to prepare the paint for the sealant Gtechniq Panel Wipe was used to cleanse any remaining polishing residues.

Using Panel Wipe ensures the surface is completely bare, free from any residues that might interfere with the sealant forming bonds with the substrate. The more bonds that are formed, the better the performance of the sealant, the longer it lasts and the more resistant it is to chemicals and fallout. Crystal Serum has to be applied in tightly controlled conditions in order for it to bond properly and once it’s cured Crystal Serum is virtually impossible to remove, so you have to get it right! That’s why Crystal Serum isn’t available as a product, only as a service through Gtechniq’s accredited detailer network. -Derek Ginger, Master Detailer, UF Detailing Studio

Crystal Serum was then carefully applied to the bodywork and allowed to cure. In the meantime the wheels were also cleansed with Panel Wipe and then protected using Gtechniq C5 Alloy Wheel Armour. 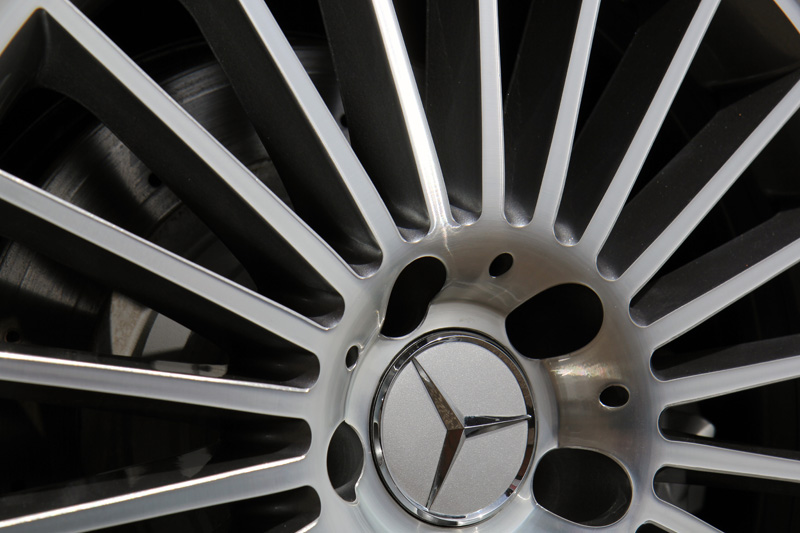 This heat resistant coating repels water and oils, making the surfaces much easier to maintain without the requirement for harsh chemicals. The tyres were dressed with Gtechniq T2 Tyre Dressing to leave a durable, natural-look satin sheen. 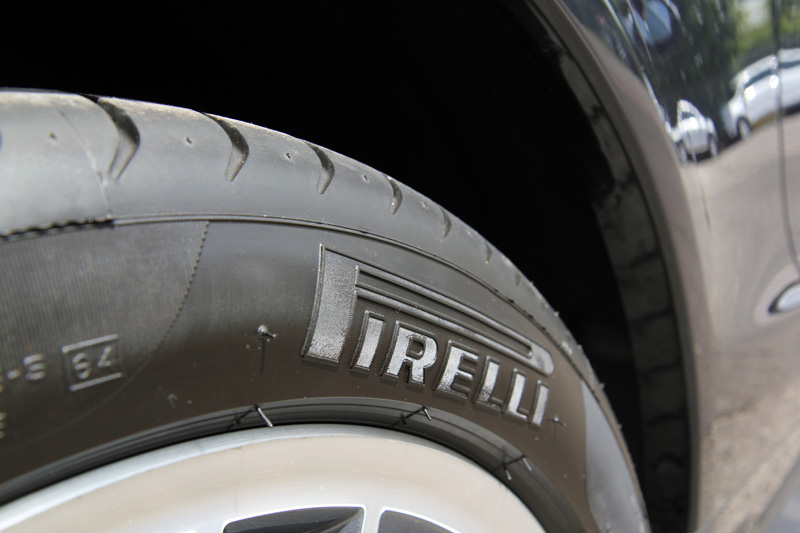 The owner had reported a water leak from around the edges of the hard top and this was as a result of the roof mechanism rubbers becoming compressed. To revive the rubber seals Swissvax Seal Feed was used. This encourages the natural rubber to expand to its original size and shape. Seal Feed also nourishes the rubber to help prevent it from drying out and cracking.

Finally, the bodywork was given a layer of Gtechniq EXO v2 to add an extra layer of slickness and gloss. The final result was truly stunning! 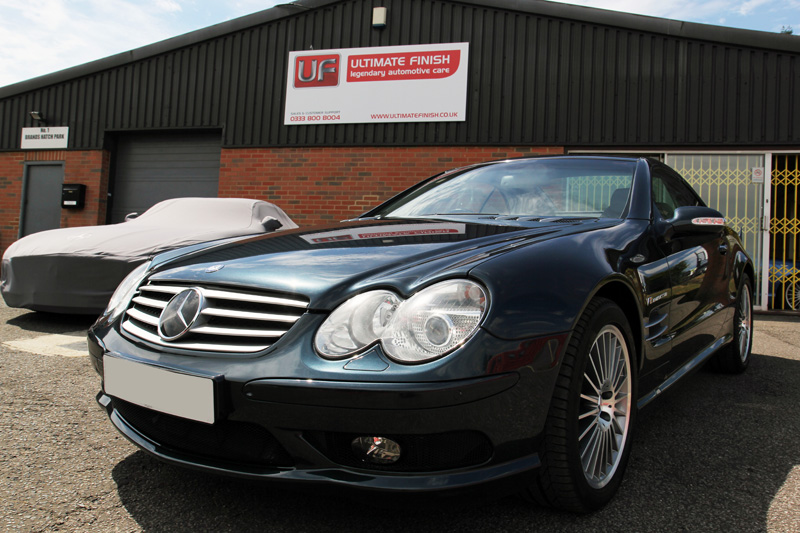 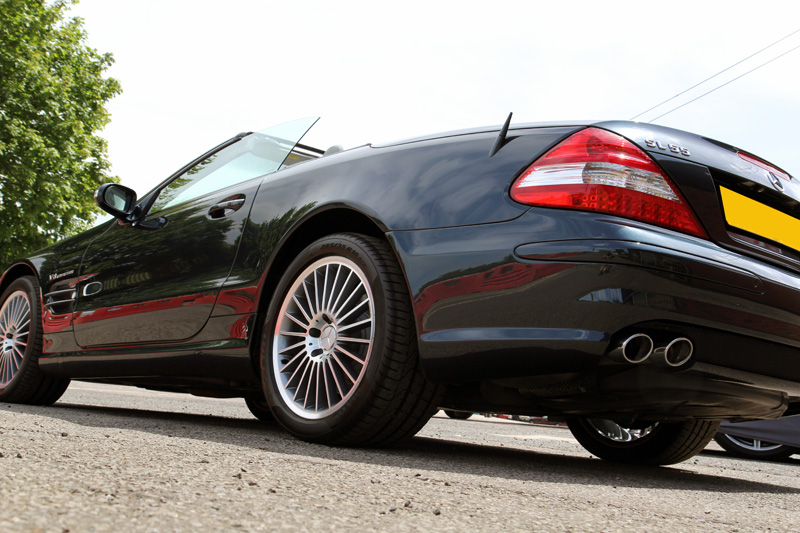 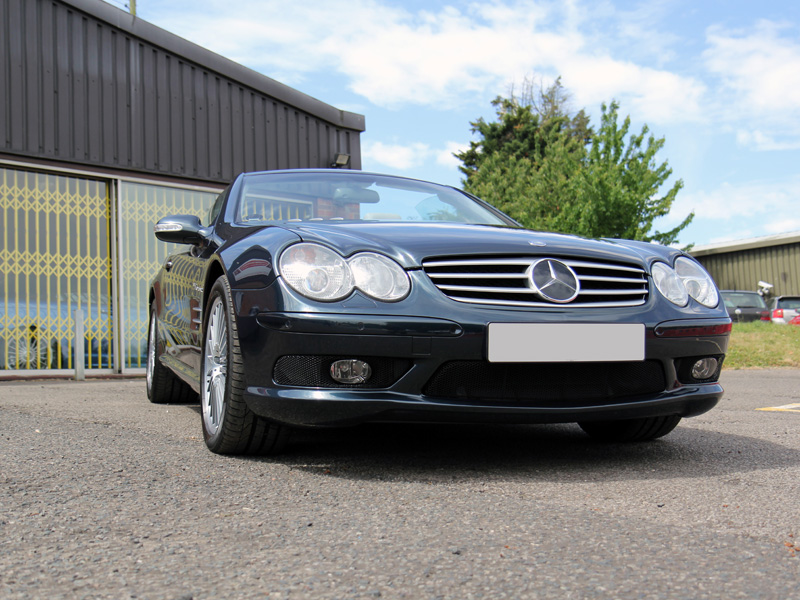