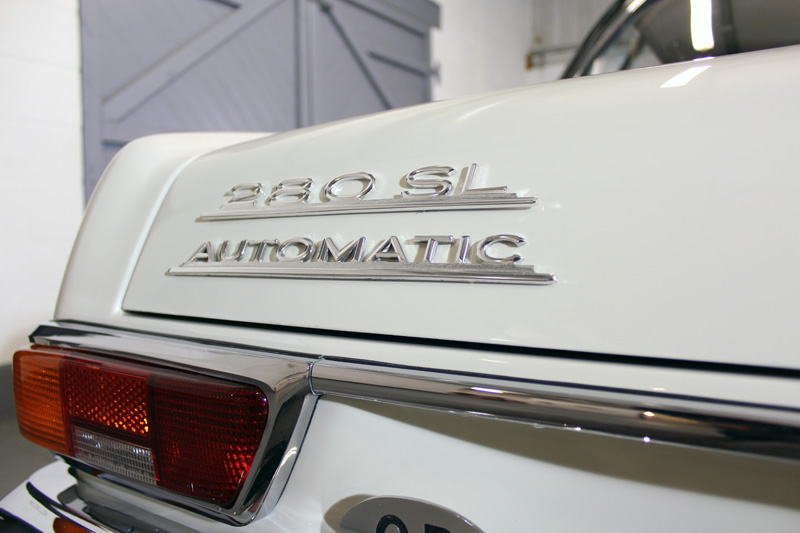 The 280 SL Roadster was introduced to the Mercedes sports car line-up in December of 1967 and production continued through to February of 1971. The flowing lines of the vehicle favoured by car enthusiasts and celebrities alike has given rise to this vehicle’s iconic status which persists to the modern era.

This particular 280 SL complete with its “Pagoda” removable hardtop was a recent acquisition by a long-standing customer of Ultimate Detailing Studio having purchased it for his wife from a highly respected specialist. It was in excellent working order as it had recently been subject to a ‘nuts and bolts’ restoration project carried out Mercedes-Benz Marque expert John Haynes Auto Technics. As well as restoring the mechanics to concours condition, the upholstery had also been upgraded from the original MB-Tex to full genuine leather.

In spite of having been well-looked after in the interim, the paintwork showed typical signs of wash damage, so on purchasing the vehicle the owner delivered it to the Ultimate Detailing Studio for a Full Paint Correction Treatment.

This is a lovely example of the 280 SL Pagoda so the customer really wanted to have it looking its best. It wasn’t that the paintwork was scratched so much as swirled. It’s quite usual to see the familiar cob-webbing marks even on cars that have been cherished and cared for regularly – it’s quite easy to introduce these swirls when washing unless you have the right equipment and fully understand the process required. – Derek Ginger, Master Detailer, UDS

Initially the centre wheel caps were removed, then bodywork and wheels and hub caps were treated with Nanolex Wheel Cleaner & Iron Remover to remove ferrous contamination. 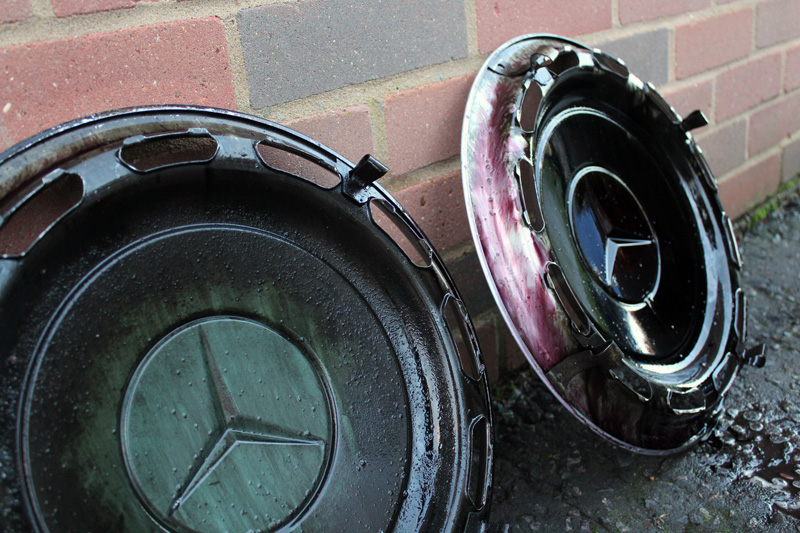 Next the 280 SL was degreased with Bilt-Hamber Surfex HD, using a detailing brush to get into the gullies of the bonnet, boot, engine and door shuts.

After being rinsed the car was then treated with Ultimate Snow Foam to remove the larger particles of dirt and grit. 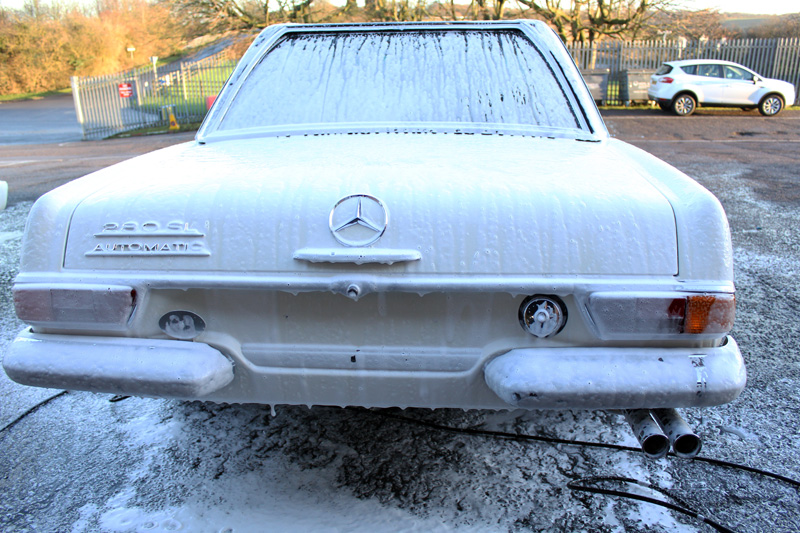 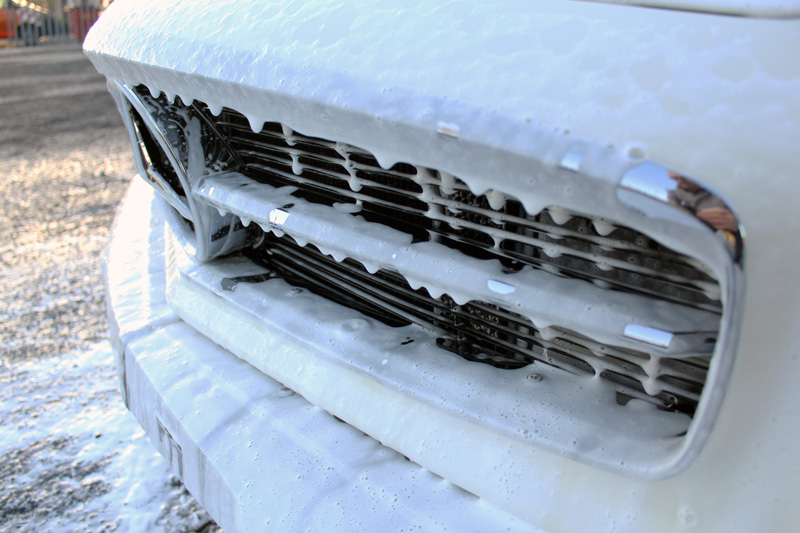 After allowing the foam to dwell, lifting dirt away from the surface of the bodywork, the car was rinsed. Then the 280 SL was washed using the Two Bucket Method, Swissvax Car Bath and a Waschpudel. The car was rinsed free of suds, then given a final, pure water rinse using an Aqua Gleam De-ionising water filter connected to a hose. Using Swissvax Micro-Dry Wonder Drying Towel the car was carefully dried and brought into the studio. 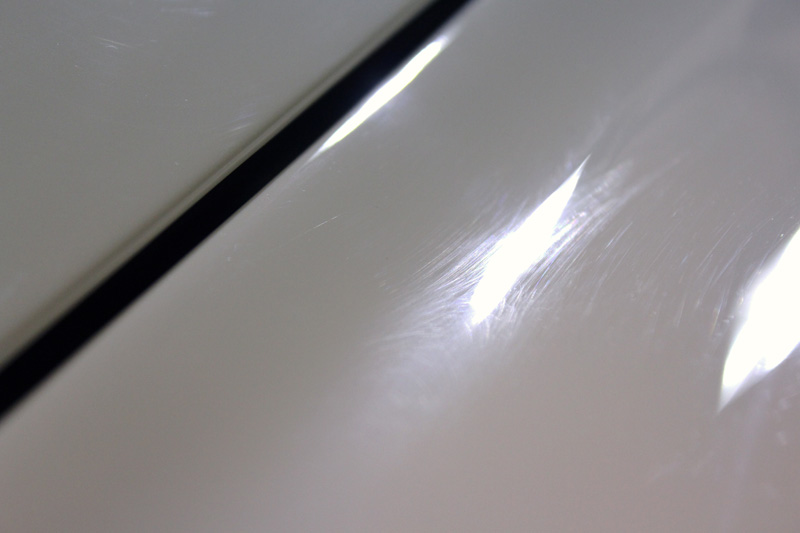 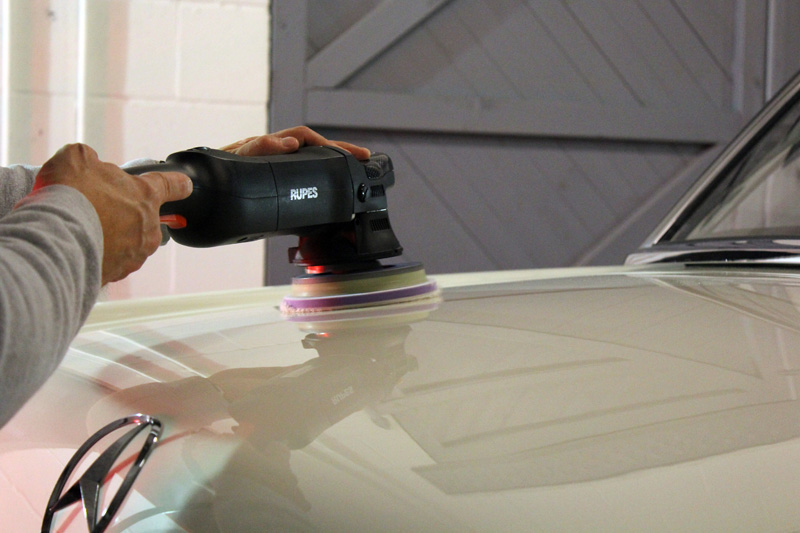 The clearcoat on the bodywork was relatively hard as you would expect with Mercedes paint. The black hard-top was much softer and was actually far more swirled than the rest of the car, but it was very easy to work with. – Derek Ginger, Master Detailer, UDS 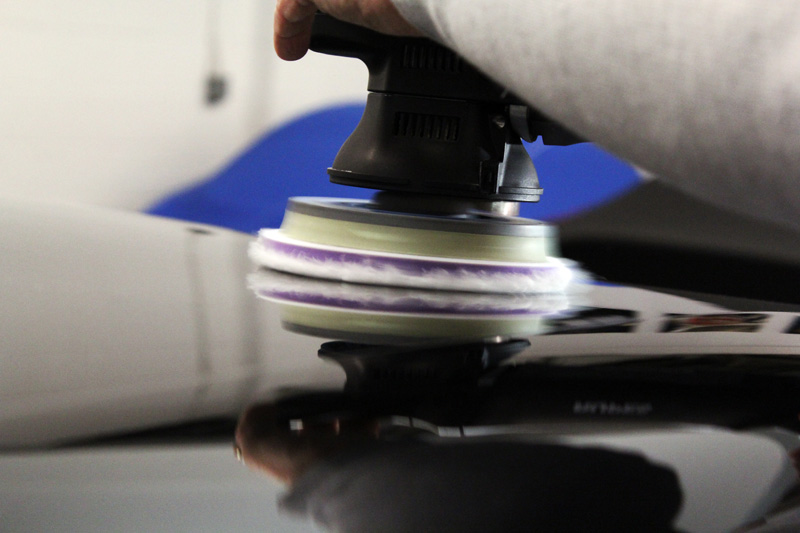 The centre pieces of the hub caps were also machine polished to remove the swirling. For these and for the tighter areas on the bodywork, the RUPES LHR 75E BigFoot Machine Polisher was used. 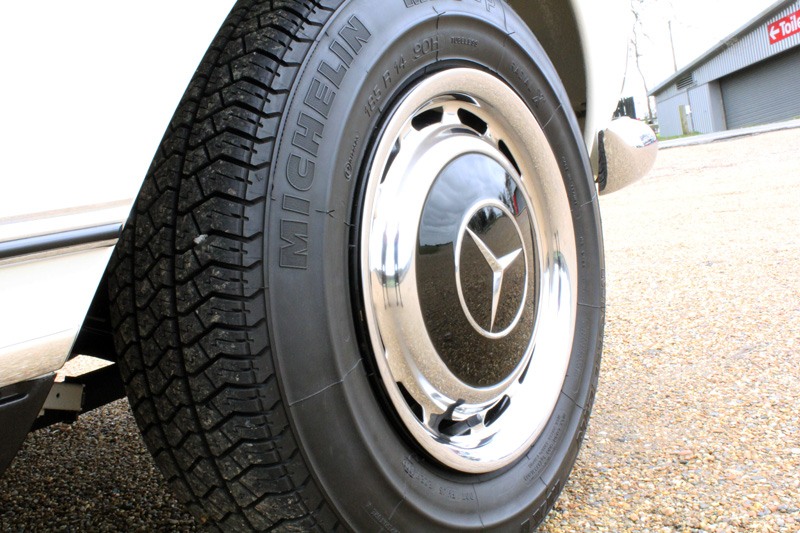 With the paint correction complete, the paintwork was enhanced and protected with two layers of Swissvax ‘Best of Show‘, a highly-concentrated wax containing 51% of purest yellow grade-one carnauba by volume.

With this type of car Swissvax Best of Show was the obvious choice. It adds a touch of luxury to an already classy car and really makes the paintwork look spectacular. On the black of the hub caps and the roof it enhances the gloss adding to the overall dazzling look of the finish. – Derek Ginger, Master Detailer, UDS 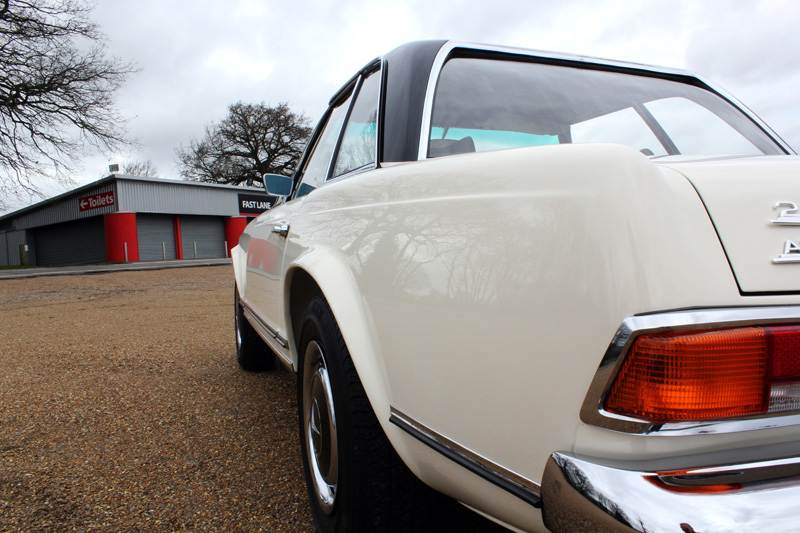 The chrome had all been rejuvenated during the restoration stage, so Gtechniq M1 All Metal Polish was used to give it a gentle clean and polish. This is a chemical cleaner which does not put fine scratches into the sensitive surface and leaves behind a warm lustre. The tyres were dressed with Swissvax Pneu tyre dressing to leave a natural, satin sheen. 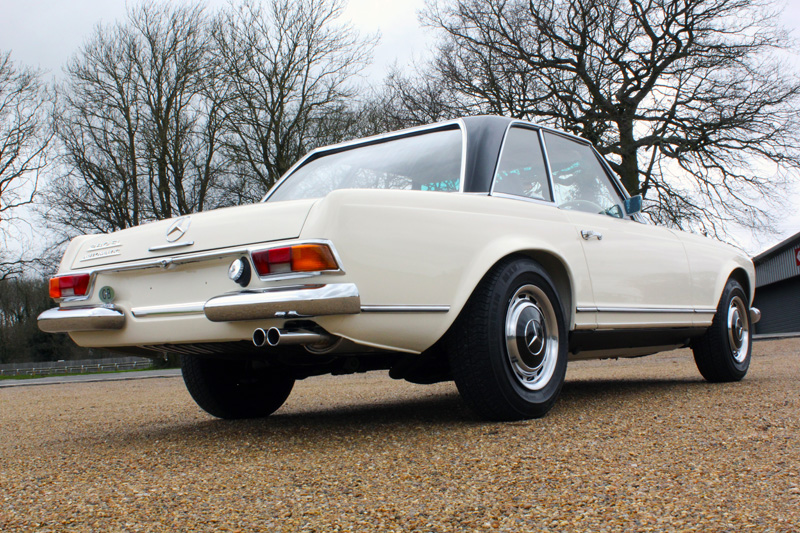 The final result was stunning, as befits such a classic beauty. The customer was very pleased with the outcome and knew his wife would be delighted, although, as he said, it may be spring before she takes it for a spin! 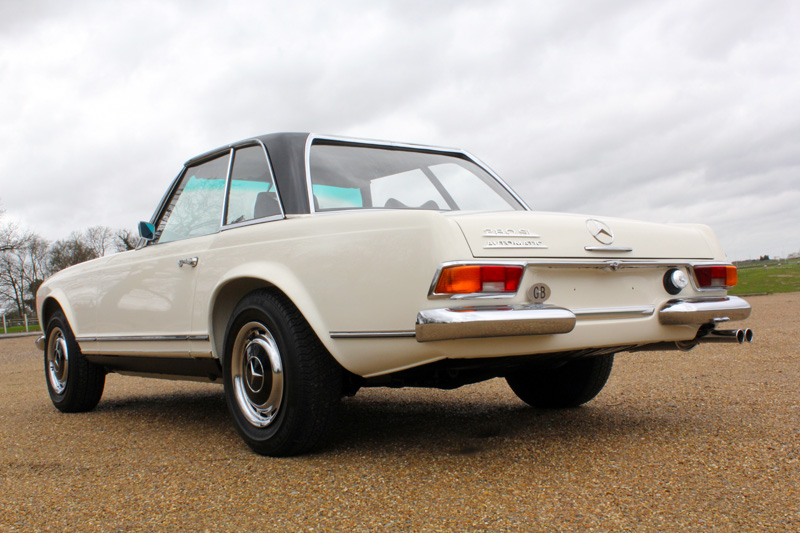 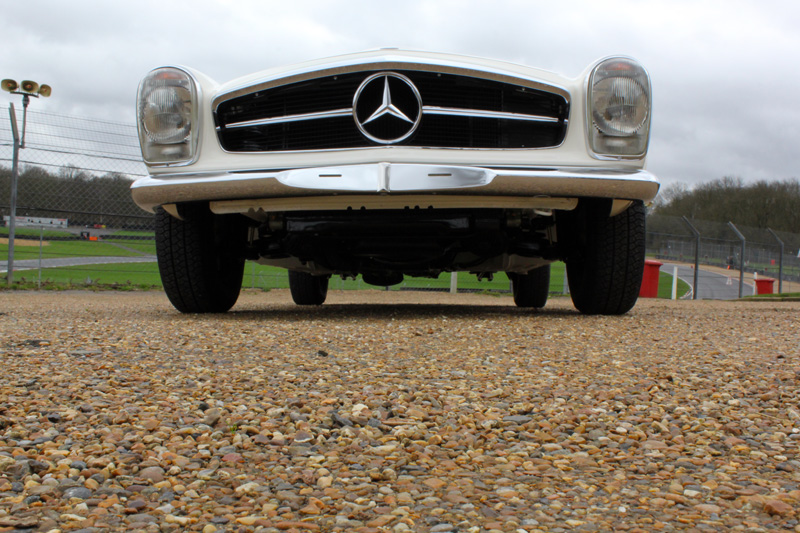