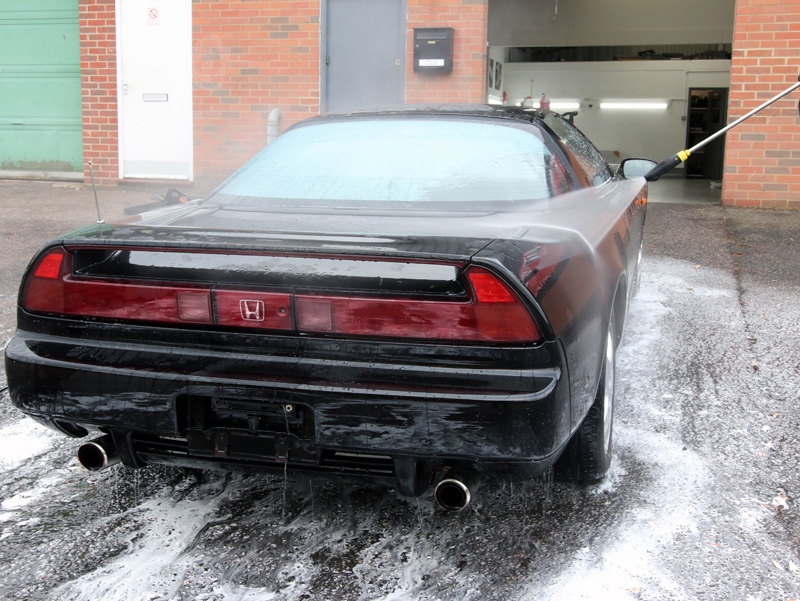 The NSX changed the way the world saw the Japanese car industry and raised the bar for affordable sports cars. Beginning life as a concept car (the HP-X or Honda Pininfarina eXperimental), the 3-litre V6 was projected to rival the V8 Ferrari 348, delivering much of the performance and handling, but with the reliability and affordability more often associated with the Japanese brand.

It looks incredible: a low nose that seems to eat up the road; slim A-pillars providing enhanced visibility not usually found in sports cars; swooping dash, reminiscent of the interior of an F-16 fighter jet cockpit and the low centre of gravity certainly helps give the impression of flying along the road. Just as Honda promised, the NSX makes a hero out of the average driver. Perhaps one of the key elements to the phenomenal performance of this car was the input from F1 legend, Ayrton Senna. In spite of Honda’s already stiffened chassis, Senna encouraged Honda to further stiffen it and insisted the rear suspension geometry be completely reconfigured. Whilst this did little for tyre wear (the NSX is notorious in its appetite for tyres!) the new set up electrified the handling and is one of the most significant factors that has kept NSX enthusiasts as passionate today as they ever have been. Senna must have been satisfied as he bought one in 1992! When Gordon Murray was designing the McLaren F1, having tried all the benchmark sports cars and found them wanting, tried the NSX and took the handling and feel characteristics from it!

This first generation Honda NSX arrived at UF’s Brands Hatch Detailing Studio for a comprehensive cosmetic restoration: Paint Correction Treatment to eliminate swirls, scratches and other blemishes in the paintwork; Engine Treatment to remove grease build-up and protect from corrosion; Alloy Wheel Protection to include a full, wheels off deep clean of the wheels and components, followed by a nano-coating to protect from grime build-up and brake dust accumulation. Additionally, a Leather Protection Treatment was requested for the interior, deep cleaning the seats and upholstery and protecting with an abrasion resistant coating.

When it arrived, the NSX was covered in fallout. We’ve had some challenging environmental conditions recently, with rain and high winds which in turn have carried red Saharan dust across the ocean. This fine red sand together with industrial pollution had settled onto the car. Sand is notoriously abrasive and with this car being Japanese and black, it was safe to assume the paintwork would be quite soft and therefore easily damaged. Particular care had to be taken in the initial decontamination stages to reflect the sensitivity of the paintwork to marking. – Matt Back, UF Detailing Studio 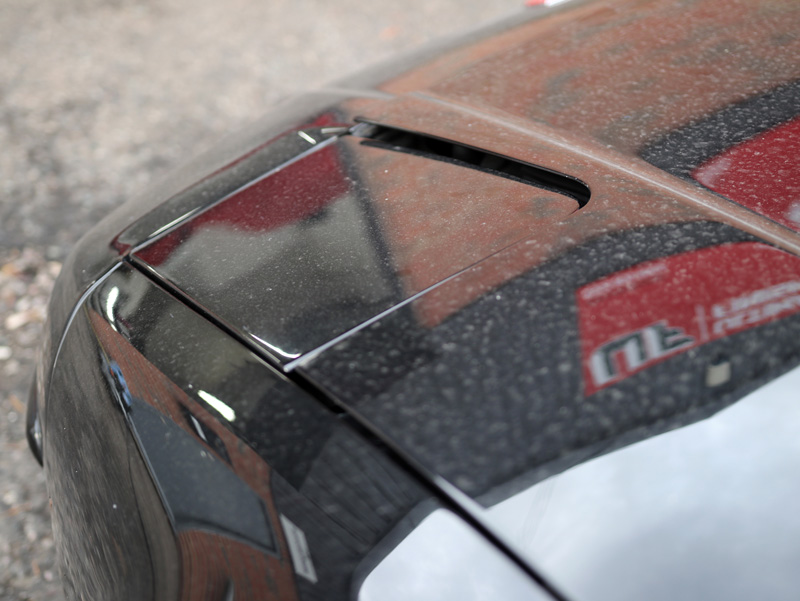 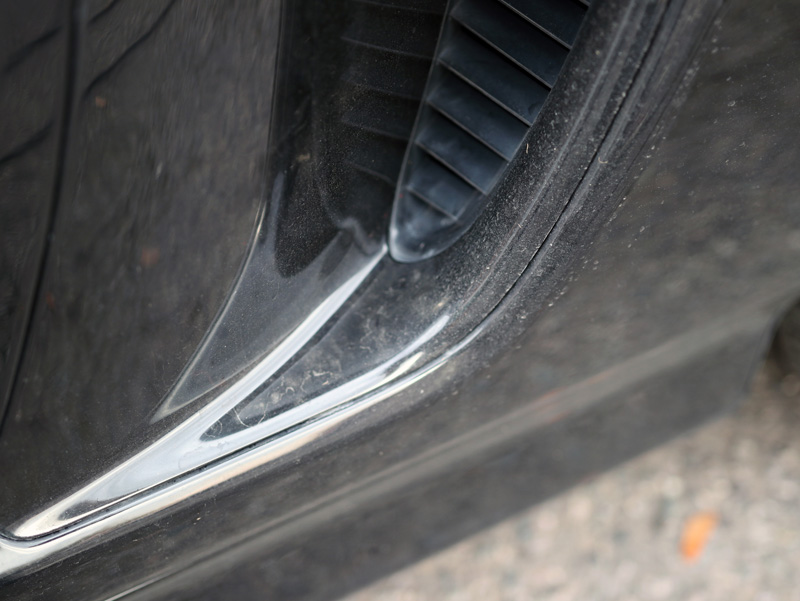 The wheels required initial cleaning to remove visible dirt and brake dust particles. Once the vehicle had been cleaned and lifted on the hydraulic ramp in the detailing studio, the wheels would be removed for further cleaning front and rear. 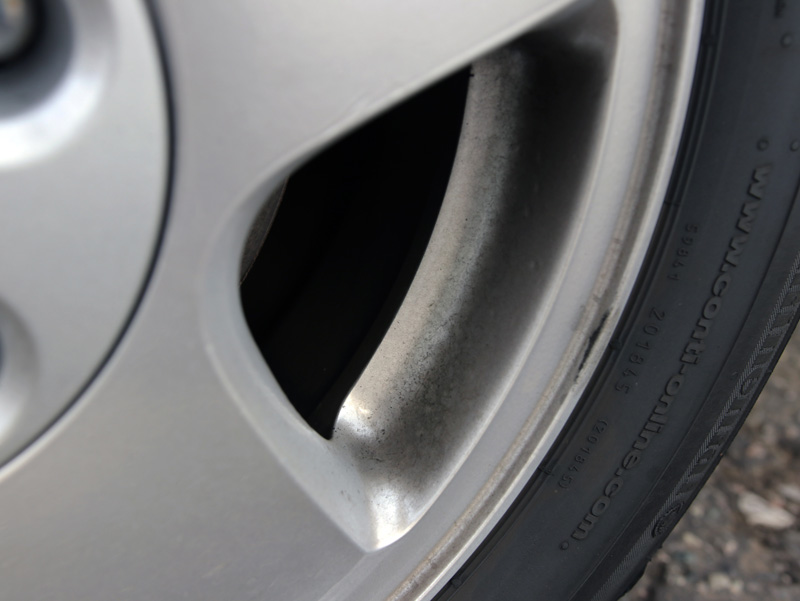 Non-standard stickers had been affixed to the NSX and the owner wanted these removed. 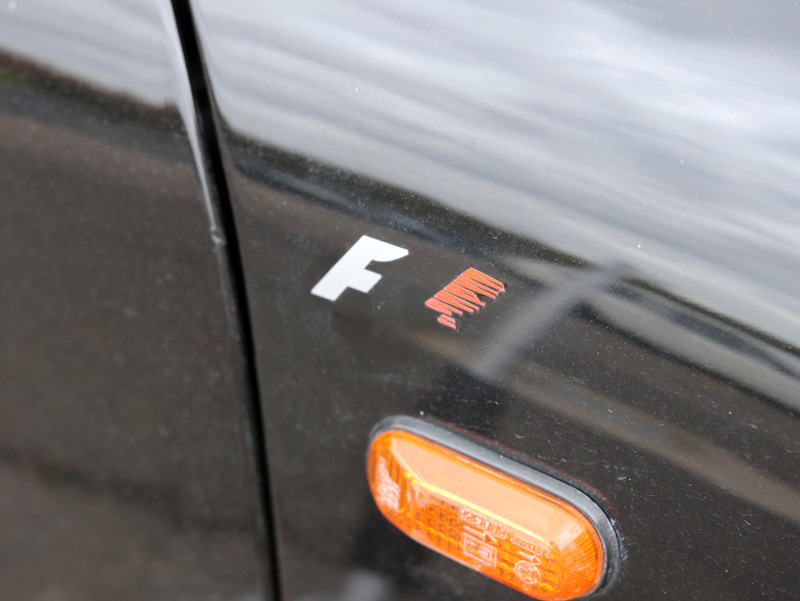 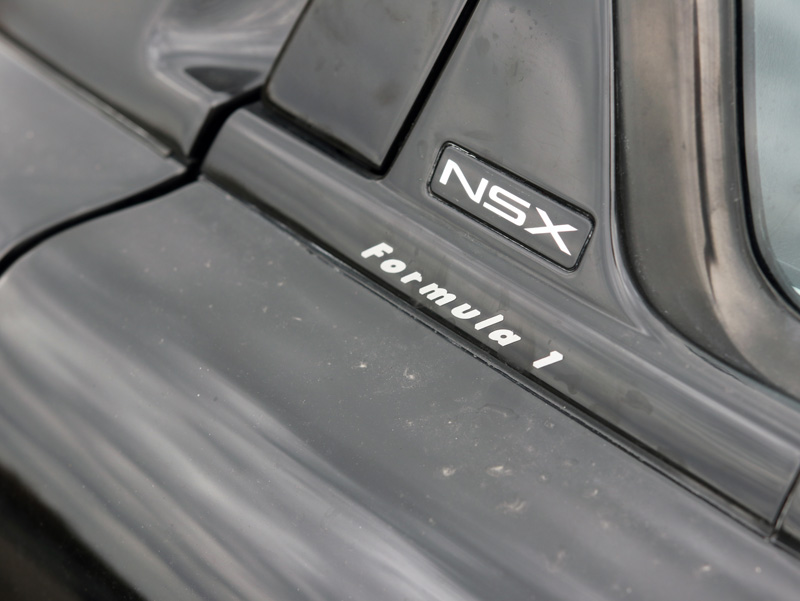 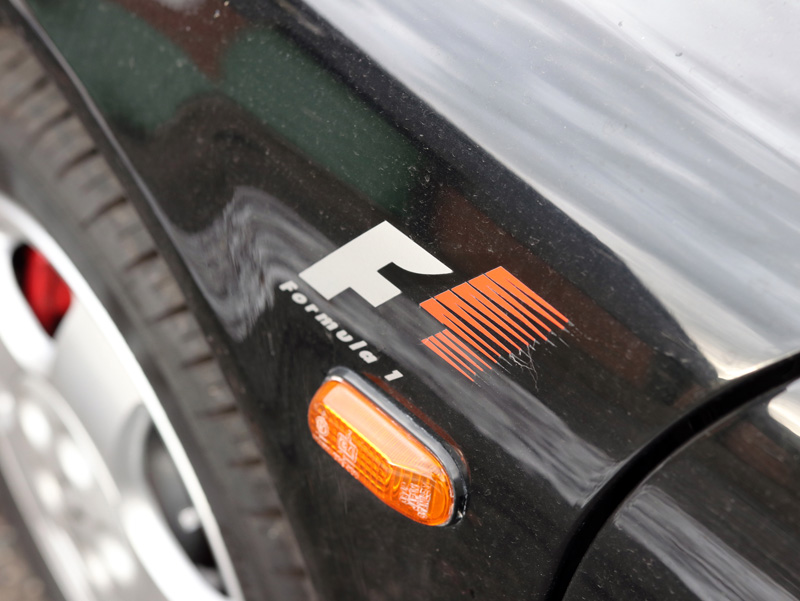 Registration plates trap dirt, so these were removed. 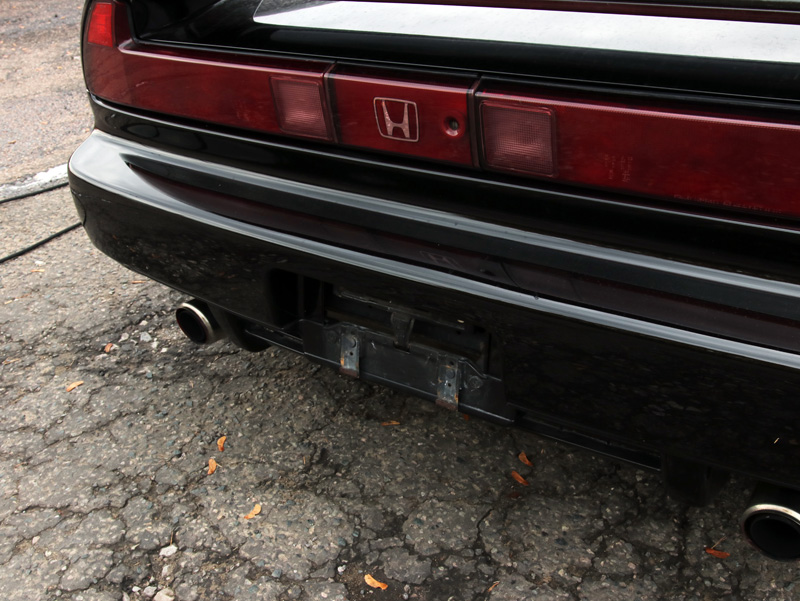 The NSX has a low profile making the body sit low over the wheels. A trolley jack was used to raise the body, increasing the gap between the wheels the arches, allowing the arches to be thoroughly cleaned. 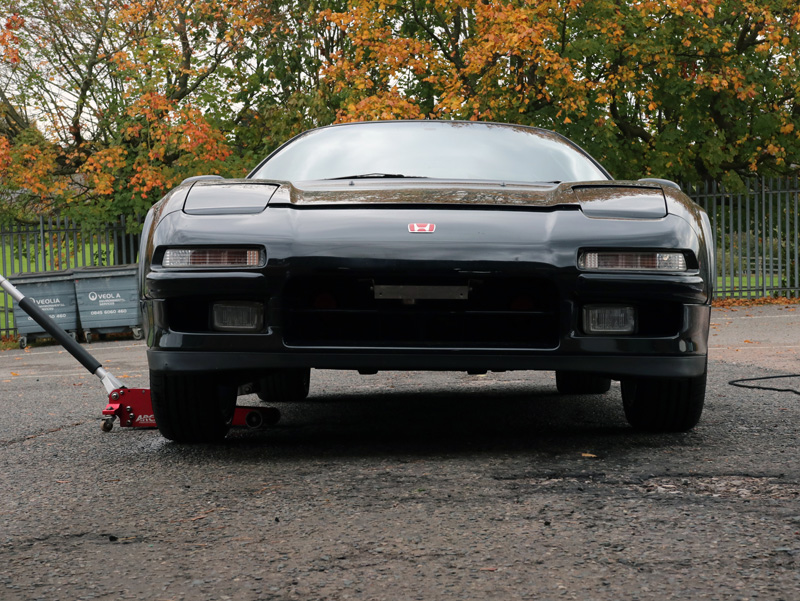 A solution of Bilt-Hamber Surfex HD, a biodegradable degreaser and all-purpose cleaner, was sprayed under the wheel arches to released trapped dirt and debris. The wheel arches were then rinsed using a pressure washer. 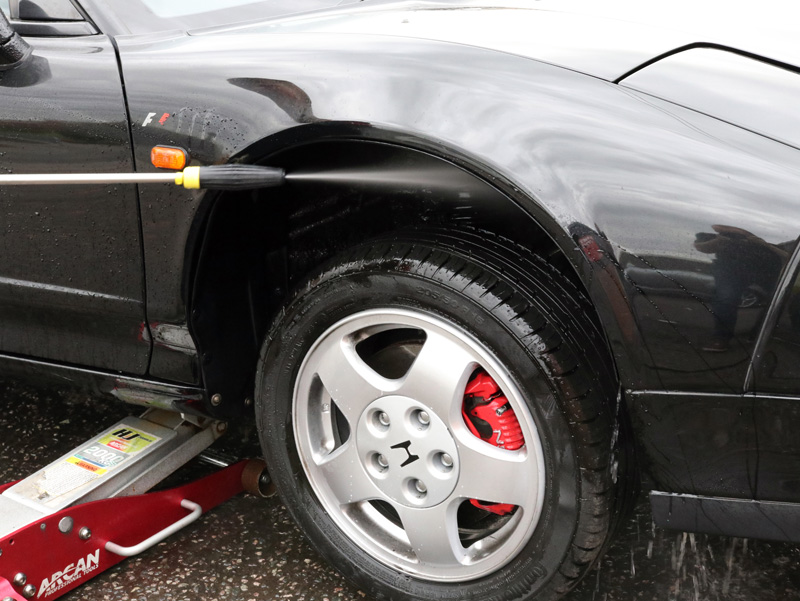 Surfex HD was then applied to the bodywork and wheels to eliminate diesel splatters. After rinsing, Gtechniq W6 Iron & General Fallout Remover was applied. W6 contains an active chemical ingredient that forces brake dust particles to break their bond with the underlying substrate allowing them to be rinsed away. This eliminates the potentially damaging requirement for rubbing at the paintwork with a wash mitt, a process that inevitably scratches paintwork.

With the front of the NSX being so low to the ground, it is particularly susceptible to tar and bug accumulation. W7 and W8 contain ingredients which break down the specific types of materials, so the contamination can be rinsed away without damaging the paintwork. – Matt Back, UF Detailing Studio

Using a foam lance attached to a Kranzle K-1152 TST pressure washer, Ultimate Snow Foam was sprayed over the car and wheels. The thick lather clings even to vertical surfaces for longer dwelling times, lifting larger particles of dirt and grit away from the surfaces. These particles are encapsulated within the foam and can be easily rinsed away.

Decontaminated, the NSX was ready for washing. Using the Two Bucket Method, which keeps wash and rinse water in separate buckets, to prevent dirt being reintroduced to the paintwork (a leading cause of swirls and scratches in paintwork). Both the Wash Bucket and the Rinse Bucket have Grit Guards placed in the bottom. The wash mitt is dunked in the Wash Bucket containing warm water and Nanolex Pure Shampoo. A section of the car is cleaned before the mitt is rinsed clean in the pure water in the Rinse Bucket, the mitt rubbed back and forth across the Grit Guard, releasing trapped particles which fall to the bottom of the bucket. The mitt is wrung out before being dunked back into Wash Bucket and reloaded with soapy water. The process is repeated until the vehicle is completely clean. After rinsing the suds, an Aqua Gleam De-ionising Water Filter was attached in-line with a hose to deliver a final, pure water rinse. The media inside the filter neutralises the calcium deposits that result in watermarks, leaving the surface sparkling and clean.

The NSX was brought into the detailing studio and a BigBoi BlowR Pro touchless car dryer was used. The BlowR Pro uses filtered air heated to 20 degrees Celsius above ambient air temperature to quickly chase water off the car, forcing trapped droplets out from behind badges and around grilles, insets and trim. This prevents drips from escaping later and interfering with the rest of the detailing process, or during the application of the nano-coating when it will inhibit the curing process. 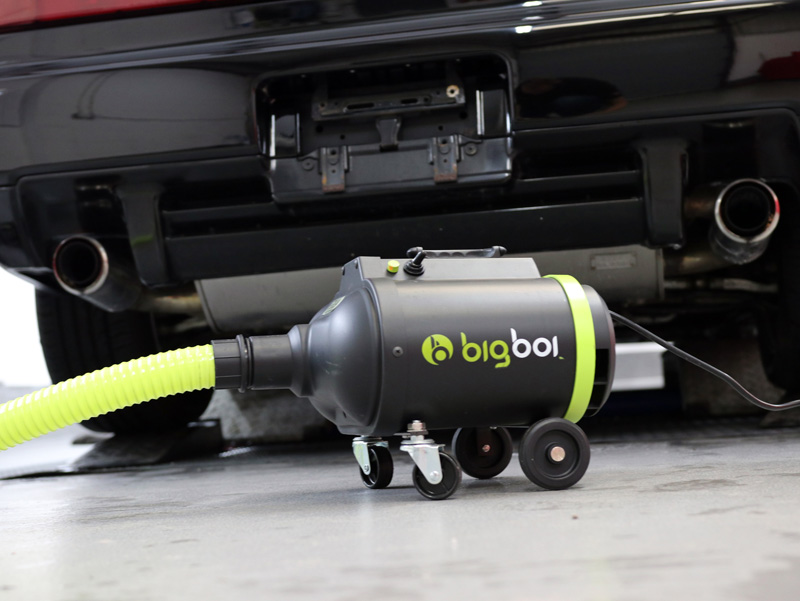 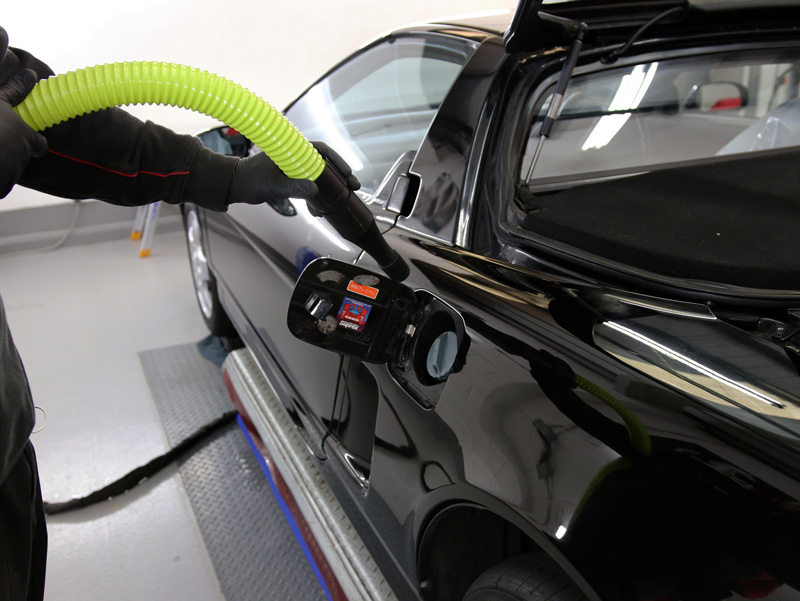 Once dry, the NSX was raised on a hydraulic ramp and the wheels removed. The paintwork was inspected under high-intensity lighting and areas of damage noted on a Vehicle Appraisal Sheet (VAS) for reference during the machine polishing stages. 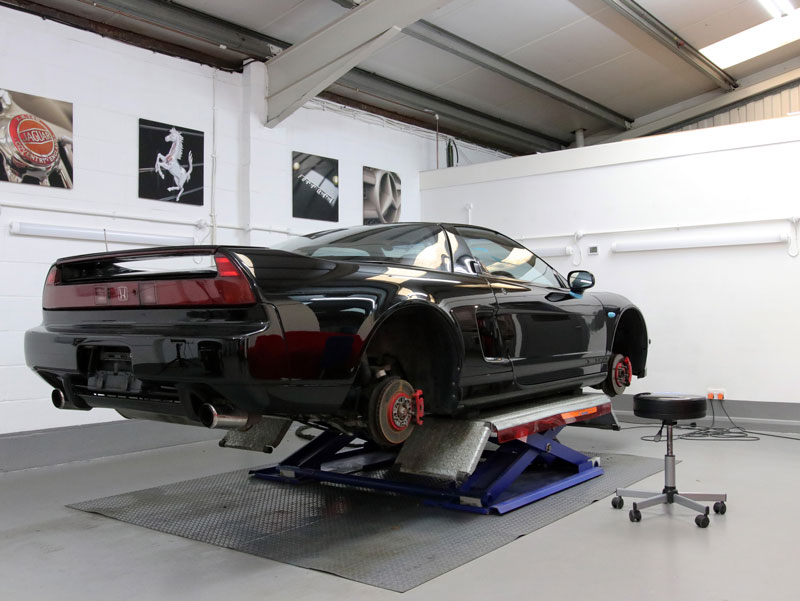 The damage was both extensive and significant, not uncommon given the age of the vehicle. 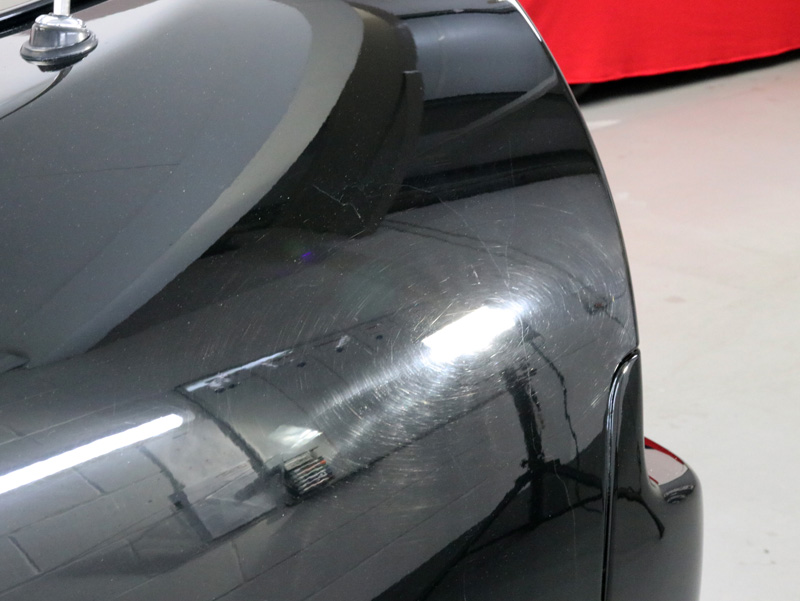 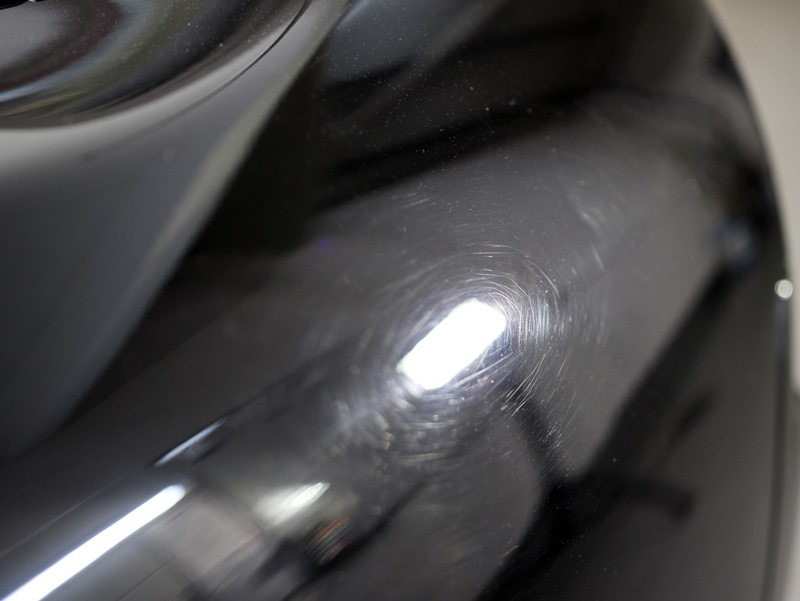 The plastic rear light cover was also swirled, a situation that would be remedied with machine polishing. 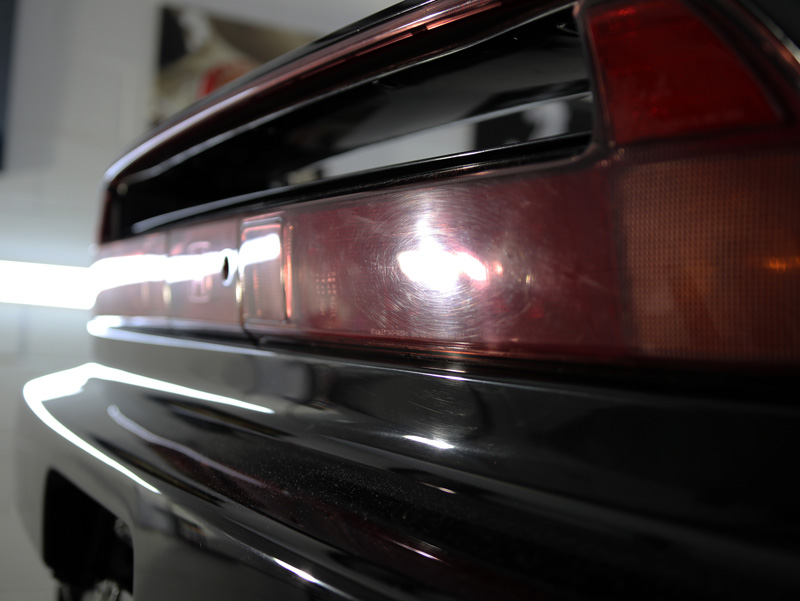 Multiple paint depths readings were taken on each panel and noted on the appraisal sheet. Readings were consistent within a range of 180 microns and 200 microns. 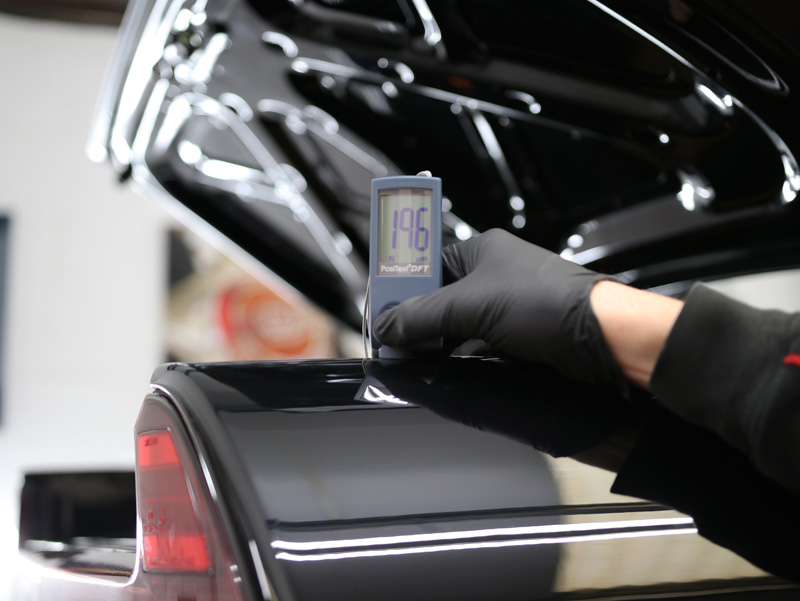 With the paintwork badly damaged and also quite soft, knowing how deep the paint is on each panel is essential prior to machine polishing in order to avoid incurring further damage. The NSX was challenging due to the curvy lines and grooves such as those surrounding the headlights and wheel arches. Accessing the inside of those grooves was testing but absolutely necessary. Having the right tools for the job is essential. – Matt Back, UF Detailing Studio

The correction stage of the machine polishing was completed using a RUPES LHR 12E Duetto, for the flatter sections and LHR 75E Mini for the contoured areas. For both, a Kamikaze Collection Banzai Dynamics Red Polishing Pad was used. Kamikaze Collection is a Japanese designer and producer of innovative car care solutions which have been engineered with special consideration for Japanese automotive paintwork. Banzai Dynamics pads feature dot point polishing (DPP) technology, a nippled surface which increases the working area of the pad whilst encouraging air flow, keeping working temperatures constant and lower. A combination of Menzerna Heavy Cut Compound 400 and Kamikaze Collection Banzai Cutting Compound was used.

Certain areas of the paintwork were more responsive to the cutting combination, so whereas some areas responded well to Banzai, other areas required Menzerna 400 which is a little more aggressive. Banzai is a more lubricating compound so it can be worked longer without drying out and sticking to the paint, keeping micro marring to a minimum. It’s not unusual for paintwork to show variance in response to machine polishing. It’s a question of reading the results and switching the combination as required. – Matt Back, UF Detailing Studio 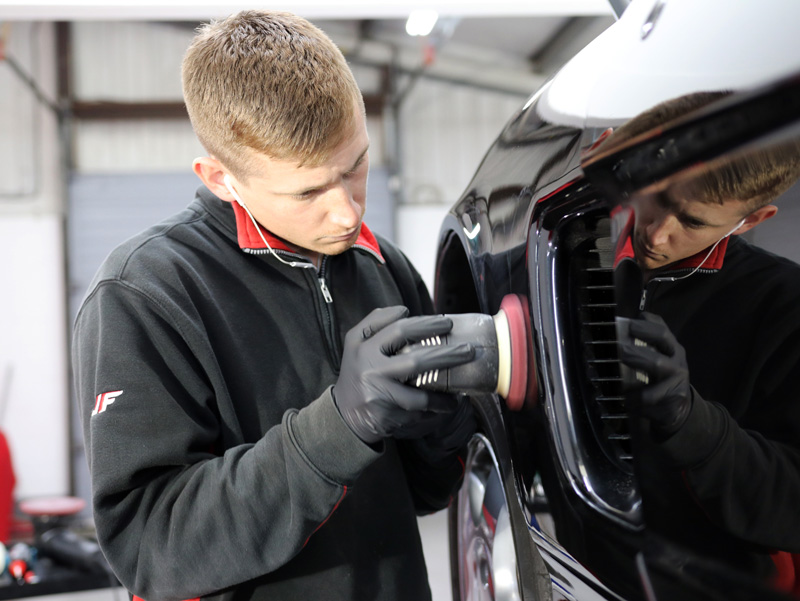 Once corrected, the paintwork required refining to eliminate fine marks left by the more aggressive compounds, restoring colour clarity and bringing the berlina black paintwork up to a high gloss finish. For this, a FLEX PE14-2-150 rotary machine polisher was used, with a 3M PERFECT-IT III Black Finishing Pad and Menzerna Super Finish Plus 3800. 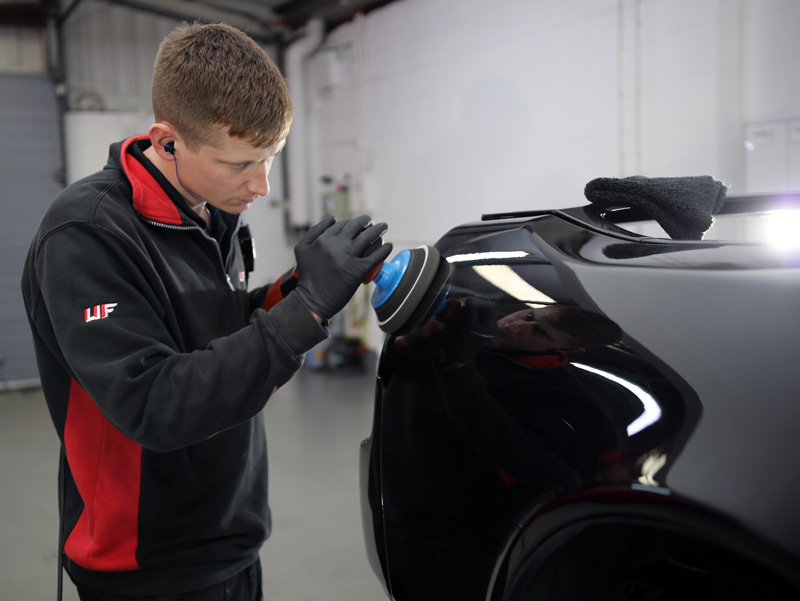 With the paintwork corrected and refined and now looking better than when it left the factory 26 years ago, attention turned to protecting it.

Read about the next stages of this amazing transformation in – 1991 Honda NSX – A Legend Reborn (Part 2).

Tried and trusted, Koch-Chemie has a suitable compound or polish for your machine polishing task in hand. Browse the range with us below.

Tried and trusted, Koch-Chemie has a suitable compound or polish for your machine polishing task in hand. Browse the range with us below.

Joe Huntley takes Gtechniq C4 and transforms a whole load of faded black trim on a Porsche Boxster in this detailing video - see the full transformation below.

Exclusive to UF, Honey & Milk Finale Quick Detailer from Auto Finesse contains all the great features of the original Finale, but with our very own fragrance! Grab this limited edition version below.

With the summer heatwave in full flow, suffering from nasty water spotting or streaks can be only too common if you're working in a hard-water area. Time to try an Aqua Gleam water filter! Check out our exclusive range below.

you need two more categories. Effing hard, and some water mixed with the chalk. 😉

Make sure you are registered for your very own UF Trade Account, there are plenty of advantages to be had: